“Industrial commodity prices are no longer rising so quickly and changes in materials prices over the next several months are likely to be modest in either direction.” —ABC Chief Economist Anirban Basu.

Construction materials prices are 8.9 percent higher than they were one year ago, according to the Aug. 17 Producer Price Index (PPI) report by the Department of Labor. Prices rose a modest 0.3 percent in July. 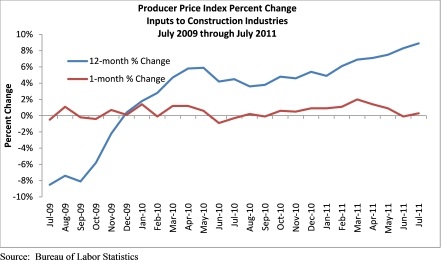 Two segments of construction inputs were associated with particularly large changes in prices for the month. Asphalt, tar roofing, and siding prices rose 2.4 percent in July and were up 4.8 percent year over year. Nonferrous wire and cable prices increased 2.3 percent for the month and are 16.6 percent higher than the same time last year.

“With the global economy slowing, industrial commodity prices are no longer rising so quickly and changes in materials prices over the next several months are likely to be modest in either direction,” said Associated Builders and Contractors Chief Economist Anirban Basu. “Given the emergence of greater volatility in the markets and growing fear of another recession, the appetite for risk is on the wane, which is likely to translate into project delays and in turn will reduce the demand for construction materials. That should also help moderate materials price increases in the months ahead. Some of this is already apparent in the data, as materials price increases in recent months have been well below the increases registered in early 2011

“However, that outlook would change if more unexpected bad news came from Europe, since that could trigger a shift in asset allocations from paper assets to harder assets such as commodities, driving up materials prices in the process,” Basu said. “The same could happen if Federal Reserve Chairman Ben Bernanke announces yet another round of quantitative easing in light of America’s recent economic slowing.”