In a sign that inflation may have arrived, prices for construction materials rose by 0.9 percent in January – the fourth straight monthly increase. This, according to the February 16 Producer Price Index (PPI) report by the Department of Labor. Inputs to construction industry prices are 4.9 percent higher from January 2010. (See Analysis below) 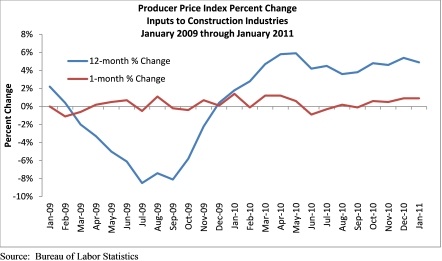 “It may be that the inflation people have been predicting for months is finally here,” said Associated Builders and Contractor Chief Economist Anirban Basu. “Energy prices rose again, but the bigger story revolves around the broadening of inflation in other categories.

“For example, the price increase of steel and softwood lumber prices accelerated last month. There are a number of potential explanations for these price hikes including an ongoing global economic recovery led by nations such as China, India, Brazil and Indonesia,” said Basu.

“But the profound monthly increases are driven by more than global expansion. Since the announcement by the Federal Reserve in early November of the creation of several hundreds of billions of dollars of additional money supply, some investors have been extricating themselves from the U.S. bond market,” Basu said. “While some of this money has likely transitioned to equity markets, in part explaining the rebound of stock prices, it is likely that some of this money has entered the commodity space. This has resulted in rapidly rising material prices.

“For construction contractors, this puts additional downward pressure on already thin profit margins. With the cost of construction rising in many instances, developers and others may choose to further delay construction starts. This, of course, represents bad news for an industry already associated with an unemployment rate above 20 percent and spending volumes that are nearly 25 percent below late-2008 levels. The hope is that speculators will not continue to pour money into commodities and that material prices will be better behaved in the months ahead,” said Basu.