Skip to content
$10.793 Million Released For Rhode Island Transportation Projects
Congressmen Patrick J. Kennedy and Jim Langevin issued statements regarding the U.S. Department of Transportation’s release of $26.6 billion in funding for state and local transportation projects as part of the federal funding slated for infrastructure job creation under the American Recovery and Reinvestment Act (ARRA) of 2009. The money, which will assist local communities with construction and repairs of highways, roads and bridges, is being released a week earlier than anticipated. Rhode Island will receive its first installment of $10.793 million out of a total of $137 million for transportation projects under the ARRA.

Each proposed project must be approved by the department’s Federal Highway Administration (FHWA). Each state’s governor must certify that their proposed projects meet certain conditions and that the state will use ARRA funds in addition to, and not to replace, state funding of transportation projects. The U.S. Department of Transportation will monitor state compliance and track job creation. The projects will be posted for the public to see at Recovery.gov.

“One of the most important funding initiatives in the American Recovery and Reinvestment Act of 2009 is the investment in our nation’s aging infrastructure. This winter has been particularly harsh to Rhode Island roads, and certainly there are numerous projects that need to be addressed to ensure safe and efficient highways, roads and bridges for our citizens. These funds will help create jobs immediately and will be a lasting investment in Rhode Island’s infrastructure,” said Kennedy.

“Immediate investment in our nation’s infrastructure is a critical component of the recovery plan that will begin to modernize our nation for the 21st Century, in addition to create much-needed jobs in Rhode Island to help bring our economy out of this recession. I voted for the American Recovery and Reinvestment Act because I wanted to create job opportunities for our workers at home, and I am pleased this funding has been released without any further delay,” said Langevin.

Projects Identified As Shovel-Ready In This First Round Of Funding:

Resurfacing of Main Rd./Route 138, including curbing, sidewalks, and drainage and guardrail improvements, from John Street to the Massachusetts State Line(2.3 miles)

Construction of a 400-foot rocky seawall along the shoreline of the Seekonk River, salt marsh mitigation, installation of a stone dust river walk and landscaping on the adjacent Warren Avenue project in East Providence

Construction of storm-water treatment pond at interchange of Route 6 and Killingly St./Route 128. 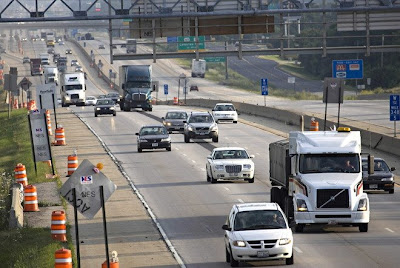 Hundreds of Wisconsin state road builders will start work in May and June when the first infusion of federal transportation stimulus dollars starts flowing, an advance in the timeline on some major projects by a year or two.

Contracts in the state will be awarded in April, May and June for stimulus funded projects. Bulldozers, dump trucks and other heavy equipment should start rolling onto jobsites about 30 to 45 days after each award, based on Federal authorities releasing a $28 billion installment to states and local transportation officials to put into their local roads and bridges.

About 18% of the allocation for road work from the American Recovery and Reinvestment Act will be spent on the reconstruction of I-94 south of Milwaukee with an expansion of the freeway west of Madison also in line for a significant federal boost.

The infrastructure work around the state represents a mix of bridge reconstruction, highway expansion, roadway resurfacing and pavement replacement, all projects already in the plans of state and local transportation departments. The additional federal funds moves those projects from wish list to shovel-ready.

“I’ve talked to different groups in different parts of the state who think a lot of this would not have happened,” said Craig Thompson, executive director of the Transportation Development Association. “Would it be happening right now? The answer is primarily no.”

Tom Fisher, president and business manager of the Wisconsin Laborer’s District Council, said that without the boost provided by the stimulus money, hundreds of his members would collect unemployment instead of paychecks this summer.

He put unemployment among construction workers tied to the road building at more than 15%, double the statewide figure among all job categories.

Wisconsin Governor Jim Doyle said the state’s share will be $529 million, but the work won’t start until the usual spring opening of the construction season. By Doyle’s estimate, the infusion of federal cash will create or save about 13,000 jobs in Wisconsin.

Some of the $529 million won’t be awarded until spring 2010. About $158 million of the total will be disbursed to cities and counties for local road and bridge work to be done a year from now.

In addition, the state plans to seek a portion of the $8 billion in stimulus funds earmarked for high-speed rail projec
ts.

Projects in the first round, accounting for $300 million of the highway and bridges total, were listed in a state budget bill signed by the governor last month.

The big-ticket items on the state’s stimulus shopping list include the expansion of I-94 from the Badger Interchange in Dane County to Highway N. The freeway will be widened from four lanes to six, at a cost of $40 million.

Work on the reconstruction and expansion of I-94 in Milwaukee, Racine and Kenosha counties will total $97.6 million, an initial investment in the project expected to cost $1.9 billion through its completion in 2016.

The smallest project on the list, in dollars, entails preventive maintenance on Highway 8 from St. Croix Falls to Turtle Lake. That’s a mere $83,481 of the $300 million total.

On projects big and small, the companies and laborers that build roads in Wisconsin are eager to get to work and reverse the downward trend in jobs and investment that started to hit hard late last year.

“We noticed the work hours drop off dramatically in the fall,” Fisher said.

Terry McGowan, manager of the International Operating Engineers Local 139, said he expects to put 1,000 workers on jobs driving bulldozers, cranes and other machinery once the stimulus-funded projects get started.

McGowan described the recovery act work as a shot of adrenaline for the industry, but said the boost will be short-lived without a solution to the long-term financial crisis in transportation financing.

Gas tax revenue, the main source of funding for state highway projects, dropped off $27.6 million from 2007 to 2008, according to figures from the state Department of Revenue.

That decrease has prompted a renewed discussion of toll roads in Wisconsin and fueled the search for additional sources of money to build roads and other transportation infrastructure.

“After the funding is gone this year, we’re going to have to work together as a state to keep our infrastructure moving forward,” McGowan said.