Governor Arnold Schwarzenegger (R) joined President Barack Obama yesterday at a town hall meeting in Los Angeles to discuss the economy, job creation and the American Recovery and Reinvestment Act (ARRA). As one of the few Republican governors in strong support of the Act, Governor Schwarzenegger has pledged to ensure California receives as much funding as possible to create jobs and stimulate the state’s economy.

Nearly $2.6 billion in Recovery Act funding for highway infrastructure investments, including highways, local streets and roads, freight and passenger rail, and port infrastructure, has been allocated to California, the largest sum for any state in the country, and over $1 billion for the repair and rebuilding of public transportation infrastructure, mass transit systems, buses, and light rail.

“In California we are pushing to pump federal stimulus funds into the economy immediately so we can create jobs, jobs and more jobs as quickly as possible,” said Gov. Schwarzenegger.

“Just as important, the federal government is finally financing our nation’s ailing infrastructure which will create jobs, sustainable economic growth and a higher quality of life in California and across the nation. Already over 50 California infrastructure projects are in line for federal funding – and that just scratches the surface of what is to come.” 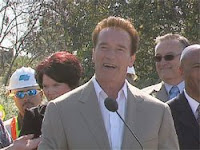 Gov. Schwarzenegger highlighted the 57 projects that are first in line to receive infrastructure-focused federal economic stimulus funding in California on Wednesday, as he was standing in front of the West Merced Overhead Project on State Route 99 in the Central Valley.

The 57 projects were voted on and announced last week by the California Transportation Commission (CTC). They total $625 million in funding. The West Merced Overhead Project is expected to help boost the local economy and create over 800 jobs – while the 57 projects are expected to create over 11,000 new jobs throughout California.

The CTC also voted to allocate funding for 56 of these projects, pending only final approval by the Federal Highway Administration (FHWA) to release the stimulus funds, enabling construction to begin. The 57th project is the reconstruction of Doyle Drive in San Francisco, which is the southern access to the Golden Gate Bridge and is awaiting approval from the CTC for the environmental approval phase before being presented to the commission for consideration of a funding allocation next month.

“This is about jobs-jobs-jobs,” said Caltrans Director Will Kempton. “We plan on starting the first of these projects within 60 days – putting people to work as soon as possible. Caltrans will use the $625 million in federal economic stimulus funding to leverage other state resources, enabling construction to begin on hundreds of projects throughout California.”

“When President Obama made infrastructure projects a priority, we immediately took action – and are working around the clock to pump this money into our economy to create jobs as quickly and efficiently as possible. President Obama was absolutely right to invest federal economic stimulus funding in our nation’s ailing infrastructure – and I made sure California was prepared to jump on this opportunity because we know first-hand it’s an effective way to provide a shot to the arm for our economy and put thousands of Californians back to work,” said Gov. Schwarzenegger.

Nearly $565 million of this funding is targeted for projects in the State Highway Operations and Protection Program (SHOPP), including work on rural and urban highways for bridge preservation and roadway safety. These projects (paving, fixing potholes, safety, bridge preservation) are first in line to receive infrastructure-focused federal economic stimulus funding because protecting public safety is the highest priority and preserving the state’s investment in its highway system is highly cost-effective. The remaining $60 million of funding will go towards pavement preservation projects.

Caterpillar, Inc., announced Tuesday nearly 2,400 layoffs despite President Obama using the equipment giant as an example of a struggling manufacturer that would benefit from his economic stimulus plan and save jobs.

The new round of job cuts will span five plants in Illinois, Indiana and Georgia, and follows the January news that Caterpillar, the world’s largest maker of mining and construction equipment, would slash 22,000 people from its 112,000-person work force.

Among the affected workers are 1,726 people at plants in East Peoria and Aurora, IL; 439 at a plant in Lafayette, IN, and 289 in Jefferson and Griffin, GA.

President Obama hosted an event in support of his stimulus plan at the company’s Peoria, IL headquarters in February, saying the $787 billion stimulus would be “a major step forward on our path to economic recovery.”

Obama quoted Caterpillar CEO and economic adviser Jim Owens as saying the plan’s passage would allow Caterpillar to rehire some of its laid off workers. “That’s a story I’m confident will be repeated at companies across the country – companies that are currently struggling to borrow money … struggling to make payroll, but could find themselves in a different position when we start implementing the plan,” President Obama said from inside the plant. “Rather than downsizing, they may be able to start growing again. Rather than cutting jobs, they may be able to create them again.”

But Caterpillar CEO Jim Owens disputed the President’s theory at the
time, telling reporters after the event,”the honest reality is we’re probably going to have more layoffs before we start hiring again.”