Governor Arnold Schwarzenegger (R-CA) and Mayor Michael Bloomberg (I-NY), along with Governor Ed Rendell (D-PA), called on the federal government on Sunday to dramatically boost its spending on bridges, sewers, high-speed rail and other infrastructure.

The co-chairs of Building America’s Future, (see sidebar) a bipartisan coalition of elected officials pushing for increased infrastructure investment, appeared on NBC’s Meet the Press and said the U.S. needs to spend up to $1.6 trillion to make up for decades of neglect and stay globally competitive. 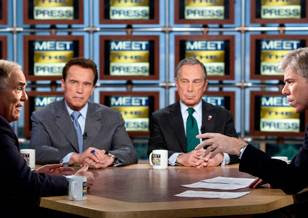 Schwarzenegger, Bloomberg and Rendell pitched infrastructure investment as a way to create jobs during the recession. While the federal Stimulus Package contains an estimated $150 billion for various forms of infrastructure, the three leaders said the national deficiency is $1.6 trillion.

“In order for the economy to thrive and to live up to 100% of its potential, you need to have moved people and goods around very quickly; and so if that falls behind, then the economy falls behind,” Schwarzenegger said.

Gov. Schwarzenegger’s appearance on the weekly news show comes less than a week after his announcement that the first $625 million of federal stimulus money California received would be used for state infrastructure projects. The money will allow state workers to begin work on 57 transportation projects, including a $75-million job to repave three miles of the 710 Freeway.

When asked by host David Gregory whether an increase in the federal 18.4 cent-per-gallon gasoline tax is an appropriate way to raise money for such projects, Schwarzenegger said, “I think one has to look at it. That is the next question, maybe, how do you finance all of this? But I think the important thing is that there’s a willingness amongst the people to pay for it.”

But those figures are far short of the $2.2 trillion that the American Society of Civil Engineers (ASCE) estimates is needed to repair highway, transit and water projects after years of neglect, let alone new projects like high-speed rail.

The three leaders said Obama seemed supportive when they met with him at the White House on Friday.

Obama has proposed $5 billion in seed money for an infrastructure bank with an independent board to pay for capital projects. He is expected to explain his complete transportation plan in April.

The first federal transportation stimulus project for Oregon has been launched, involving paving and adding a safety barrier to part the Sunset Highway.

The U.S. 26 project will add cable barriers and pavement from 185th Avenue in Hillsboro to Glencoe Road in North Plains. Baker Rock Resources, a family owned company from Washington County, was awarded the contract within days of President Barack Obama signing the stimulus bill. Construction will start in the coming weeks and finish by the end of the year.

The project is estimated to cost $5.8 million, including planning and construction, and will have $2.9 million in stimulus money.

Governor Ted Kulongoski (D) was at Hillsboro Stadium as he unveiled the first of hundreds of roadside signs that will mark Oregon highway projects to be funded by the American Recovery and Reinvestment Act (ARRA).

Stimulus projects will help enhance the environment through funding mass transit and bicycle paths, in addition to maintenance of the highway system. He said the $5 million project will provide jobs and improve infrastructure on the road from Portland to the Pacific Coast.

“This project is just one of hundreds of examples you’ll see with increasing frequency of how transportation spending will help Oregon’s economy by creating jobs and improving our transportation infrastructure,” Kulongoski said. “In addition to the immediate economic benefits, this project is also improving the long-term safety and efficiency of our infrastructure – which is critical to moving people, commerce and goods.”

The governor said the project was an example of the kind of work that would be funded on a more regular basis if the Legislature passes his transportation bill, known as the Jobs and Transportation Act of 2009.

“If there’s one piece of legislation the Legislature must pass this session to build a strong economy, it’s the Jobs and Transportation Act,” Kulongoski said.

The $234 million in projects controlled by the Oregon Department of Transportation(ODOT) will create 3,300 jobs, mostly this year. All bids for construction contracts will be opened by June 17, ODOT says, a schedule that would go beyond federal requirements and could make Oregon eligible to receive money from other states if they don’t meet the federal deadline.

Yet, the scramble for the federal infusion revived urban and rural splits and pitted highway and alternative transit interests. Portland-area cities and counties argue that their large populations and economic contributions to the state warrant more money.

t systems, said Bob Stacey, executive director of 1000 Friends of Oregon. The state constitu- tion requires gas tax money be spent on roads and bridges, so this was a chance to spend money on mass transit, he said.

“What we’re looking for here is a balance system — one that provides choices for Oregonians — and we know our state system doesn’t allow us those choices,” he said. “Right now, we’re stuck in one mode.” 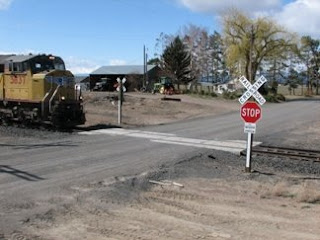 ODOT officials said they achieved a better balance between mass transit and highway spending than perhaps any other state in the nation. Railroad officials have told ODOT that they haven’t heard of any other state offering stimulus transportation money for rail and other non-highway projects.

“To my knowledge, we’re the only state in the nation that has opened up this sort of opportunity,” said Doug Tindall, ODOT’s deputy director for highways.