The Biloxi, MS City Council declared a state of emergency Monday, a move that could accelerate repairs to the badly damaged Popp’s Ferry Bridge. A barge attempting to pass beneath the bridge struck its support pillars, causing a partial collapse last Friday.

No one was hurt in the accident.

Mayor A.J. Holloway said he hopes to replace two destroyed spans of the structure within 60 days — in time for the approaching hurricane season. As a hurricane evacuation route, the mayor says the Popp’s Ferry Bridge is eligible for federal disaster funds if the city declares a state of emergency.

“This bridge is critical to our day-to-day travels, and we’re not too far away from the June 1 opening of hurricane season,” Holloway said, “So I want a state of emergency declaration to let our state and federal partners know the enormity of this situation.”

The bridge is one of three that stretch across the bay, serving as vital links in any evacuation.

Even before Katrina, Holloway began working to secure funds for a new bridge traveling to Washington, D.C. to lobby for funds for an environmental assessment, which is required to identify the best solution for replacing the bridge.

According to city estimates, 20,000 vehicles travel the Popp’s Ferry Bridge each day. It also opens about ten times a day for marine traffic.

In 2003 and 2004, the city of Biloxi made more than $27 million in improvements to the Popp’s Ferry Bridge to accommodate traffic when Popp’s Ferry Road was widened.

Mayor Holloway said Mississippi Department of Transportation (MDOT) will rebuild the bridge using Federal Highway Emergency money, which will be repaid with the insurance reimbursement.

“I think that’s the only way to go,” he said of asking MDOT to do the work. He said MDOT has the experience to rebuild the bridge and it will save the city time and money. “We declare a state of emergency in case we have to do something in support of them.”

“Sometimes they have them in stock,” he said, or they can be steam-cured so the contractor can quickly put them in place.

Brown believes the project will be bid to select contractors the agency can depend on to do quality work quickly.

Holloway said, “There’s more damage than we thought at first.” Eight pilings were completely taken out when eight barges pushed by a tug crashed into the bridge. Holloway rode out on a boat to see the damage, and said he could see another piling was cracked in half. Originally it was thought one section of the bridge collapsed, but he said two sections are gone, with about 90 feet of bridge wiped out.

Salvage work began Friday afternoon. “Hopefully they’ll be completed with that by Thursday,” he said, and MDOT can start work by the end of the week.

He said MDOT hired engineering firm Neel-Schaffer to inspect the damage, and divers are working in 30 feet of water to see if there is any damage under the surface. There appears to be no damage to the hydraulics that control the drawbridge, he told the council.

The Coast Guard has reopened the waterway through the drawbridge at a reduced speed while salvage operations continue. The Coast Guard said Monday the cause of the accident is still under investigation. 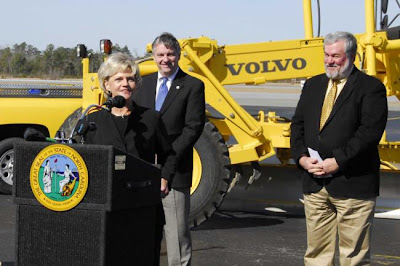 “These first road projects will create a wide range of jobs throughout North Carolina and can address some of our most pressing, ready-to-go infrastructure needs,” Perdue said.

The projects are located in Brunswick, Camden, Currituck, Gaston, Mecklenburg, Montgomery, Scotland and Stanly counties. Two projects, one located in Alamance County and one in Forsyth/Stokes counties, were let to contract on March 17 and will be awarded once the respective low bidders demonstrate that they have met “good faith effort” requirements in attempting to reach the disadvantaged business enterprise goals set forth in the contracts. The disadvantaged business enterprise goals were met or exceeded on the nine contracts awarded.

The bids received on all 11 economic recovery projects let to contract in March came in more than 19 percent, or nearly $15.8 million, below NCDOT estimates.

Work on all contracts can start as soon as April 27, with the exception of the Currituck County bridge replacement project, which will begin no sooner than July 1 due to an environmental moratorium.

In addition to helping create jobs, the nine projects awarded will complete needed infrastructure improvements. They include four widening projects that will help improve mobility and reduce congestion; three construction projects that will extend key corridors and provide regional access; and two bridge replacement projects, one of which will replace the state’s fourth oldest bridge still in use.

“Each of these projects reflects local priorities that, in many cases, have been delayed or unfunded in the past,” Conti said. “We have an ongoing dialogue with our planning organizations across the state to determine which projects are most needed and will provide the greatest potential for economic development.”

NCDOT received a total of $838 million through the economic recovery plan, including $735 million for highway and bridge projects and $103 million for transit.

The main factors considered were whether the projects could be let to contract within 120 days of the Feb. 17 bill signing and the role they play in meeting NCDOT’s overarching goals of safety, mobility and infrastructure health. The legislation also specifies that projects in economically distressed areas should be given priority, and all but three projects are in counties that fall in that category.

Officials selected projects diverse in size, type and geographic location to help benefit a wide range of industry partners, as well as ensure equitable distribution of funds. Most of the projects have been approved as part of NCDOT’s seven-year State Transportation Improvement Program.

Gov. Perdue and Secretary Conti are also working with Sen. Kay Hagan, Rep. Mel Watt and the rest of North Carolina’s Congressional delegation to pursue discretionary grant money included in the American Recovery and Reinvestment Act to use for the $300-million replacement of the Yadkin River Bridge on I-85 in Davidson and Rowan counties.

The N.C. Board of Transportation delegated Secretary Conti authority to award contracts for highway projects in accordance with Gov. Perdue’s Executive Order No. 2. The board will meet on Thursday, April 2 at 9 a.m. in Raleigh to consider other matters that remain under its purview.
Contracts awarded include:
Building America’s Future Welcomes Hawaii Gov. Lingle As Newest Member

“Hawaii remains focused on investing in the repair, maintenance and upgrade of our critical infrastructure to meet the current needs of our residents and businesses, while also preparing for the 21st Century,” said Gov. Lingle.

“With 80 percent of Hawaii’s consumer goods, fuel and construction materials passing through our harbors, infrastructure is directly tied to Hawaii’s quality of life and economic prosperity. The ability to move goods and people quickly and safely around the state helps keep our quality of life high and our cost of living low. I look forward to working with this diverse coalition to secure additional federal investment on the critical infrastructure needed to keep our communities safe and local economy strong,” Gov. Lingle added.