“This light rail project has been an engine for growth in the Phoenix area,” LaHood said. “And these recovery funds will ensure that transit continues to stimulate Arizona’s economy.”

The ARRA funds will help to complete the rail line and allow Valley Metro to begin work on the extension, which is expected to create 10,000 jobs over the life of the project. Funds will be used for signal work, communications, an operations control center, and further testing of two light rail cars to be put into service. 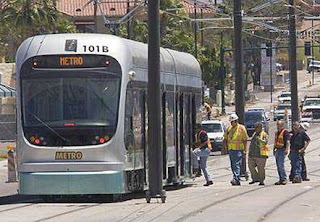 The arrival of federal funds supple- ments local resources, which have declined during the economic downturn, and allows for a quicker investment in the extension.

In 2005, the Federal Transit Administration signed a “full funding grant agreement” to provide $587 million, or 42 percent, of the $1.4 billion, 19.6-mile project, to be paid out over six years. Today’s allotment amounts to an advance of a portion of the project’s 2010 payout amount.

“This project demonstrates that transit serves as a focal point for new development in Phoenix, Tempe and Mesa,” LaHood said. “By getting these funds to you now, we’re providing a boost that will help other very important transit projects to keep moving forward – while also stimulating the local economy.”

LaHood said later Friday, as he spoke before the Greater Phoenix Chamber of Commerce about the $787 billion stimulus plan, that he expects to see federal stimulus spending to start showing up in earnest this summer and is hopeful for an economic rebound in 2010. He said federal money has already started to flow to states and cities and he expects transportation and public works construction projects to begin this summer.

He defended the process in which stimulus money is being dispersed by saying that sending money to state transportation agencies instead of directly to cities and other localities is the most efficient way of doling out the construction dollars.

The Michigan State Senate approved legislation on Thursday appropriating $900 million in stimulus funds for transportation projects. The approval paves the way for Michigan Department of Transportation’s (MDOT) shovel-ready projects to start accepting bids on April 2, and opens the door to hiring as many as 25,000 people.

“With authorization for these vital road and transit projects accomplished so quickly, we can put this money to work for citizens throughout the state. The 25,000 jobs created by this funding will help us rebuild Michigan’s infrastructure and revitalize our economy. It is urgent that we get Michigan’s share of federal recovery money into our state’s economy in order to accelerate our own recovery plan. I want to thank our legislators for acting quickly to clear the way for this important economic opportunity for Michigan.”

The largest area projects funded by the federal transportation stimulus include:

Bill 4582 will now go to the Governor for final approval.

For more than half a century, Kentucky Fried Chicken (KFC) has “filled up” its fans with the Colonel’s world famous, freshly prepared fried chicken. In a marketing first, KFC is celebrating its continued dedication to freshness by launching a pilot infrastructure renewal program, becoming the first-ever corporate sponsor of “fresh”ly “filled up” potholes in up to five major cities across the U.S.

The KFC Colonel and his professional road repair crew got started in their hometown of Louisville by filling up potholes and re-freshing roads around the city. KFC also issued an open offer to mayors of cities nationwide, asking them to describe their city streets’ state of disrepair. Four of these lucky cities, chosen at random, will receive KFC’s road re-“fresh”ment, promising citizens a smooth drive that is fit for a Colonel.

In today’s troubled economy, cities across the nation are left with potholes in desperate need of repair. It is estimated that U.S. roads are riddled with more than 350 million potholes nationwide – that’s one mini canyon for every man, woman and child in America.

“This program is a perfect example of that rare and optimal occurrence when a company can creatively market itself and help local governments and everyday Americans across the country,” said Javier Benito, executive vice president of marketing and food innovation for KFC.

“Everyone could use a little help during these tough economic times and this initiative – like our commitment to provide affordable, freshly prepared chicken – is our way of carrying on Colonel Sanders’ legacy.”

“Budgets are tight for cities across the country, and finding funding for needed road repairs is a continuing challenge,” said Louisville’s Mayor Jerry Abramson. “It’s great to have a concerned corporation like KFC create innovative private/public partnerships (PPP) like this pothole refresh program.”

KFC-refreshed potholes will be branded via a large stencil that reads “Re-Freshed by KFC” in eye-catching, but non-permanent street chalk.

The following is a copy of the letter that was sent out to mayors across the country. Maybe your city could be next!

It is estimated that U.S. roads are riddled with more than 350 million potholes nationwide – that’s one for every man, woman and child in America! Bec
ause of long, harsh winters and heavy traffic, cities everywhere are left with more potholes than ever. Add in the fact that asphalt is an expensive product, and the cost of those repairs is higher than ever.

Because of the financially tough times, many cities are delaying construction projects because they need to spend money patching these potholes instead. Some cities are even being forced to cut back on road services and maintenance crews. We at KFC understand that filling every one of these potholes is important and we’re here to help!

In honor of our “Fresh Tastes Best” campaign, we want to come and Re-“Fresh” your roads! The Colonel and his crew are on a mission to help out America and sponsor your city’s “Fresh”ly repaired roads. Every patched pothole comes with the Colonel’s very own stamp of approval.

KFC has been bringing communities together over buckets of chicken for more than 50 years. We invite you and your city to become a part of a new tradition and accept our offer to Re-“Fresh” your roads. Together, we can give your community a much needed break and help keep America moving.