Did you see this? 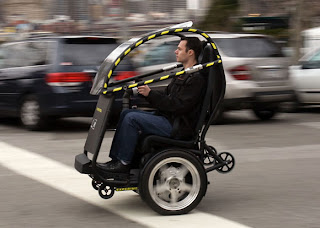 GM and Segway Join Forces to Reinvent Urban Transportation
I grew up in Detroit in the 50’s. GM was the giant with Chevys, Corvettes and Pontiacs; Ford kept on trying with the T-Bird, V-8 engines and eventually the Mustang; Chrysler kept trying to make an impression until it succeeded with the Chrysler 300, the Plymouth Roadrunner and the Dodge Charger. The one thing they all had in common was four-wheels…

Now we have General Motors Corp., and Segway, the leader in personal, green transportation, demonstrating a new type of vehicle that could change the way we move around in cities. I hope GM isn’t using all of their bailout money for this project.

Dubbed Project P.U.M.A. (Personal Urban Mobility and Accessibility), GM and Segway are developing an electrically powered, two-seat prototype vehicle that has only two wheels. It could allow people to travel around cities more quickly, safely, quietly and cleanly – and at a lower total cost. The vehicle also enables design creativity, fashion, fun and social networking.

GM and Segway announced their collaboration while demonstrating the Project P.U.M.A. prototype in New York City at the 2009 New York International Auto Show.

“Project P.U.M.A. represents a unique solution to moving about and interacting in cities, where more than half of the world’s people live,” said Larry Burns, GM vice president of research and development, and strategic planning. “Imagine small, nimble electric vehicles that know where other moving objects are and avoid running into them. Now, connect those vehicles in an Internet-like web and you can greatly enhance the ability of people to move through cities, find places to park and connect to their social and business networks.”

Trends indicate that urbanization is growing, and with that comes increased congestion and more competition for parking. Cities around the world are actively looking for solutions to alleviate congestion and pollution.

“We are excited to be working together to demonstrate a dramatically different approach to urban mobility,” said Jim Norrod, CEO of Segway Inc. “There’s an emotional connection you get when using Segway products. The Project P.U.M.A. prototype vehicle embodies this through the combination of advanced technologies that Segway and GM bring to the table to complete the connection between the rider, environment, and others.”

Project P.U.M.A. vehicles will also allow designers to create new fashion trends for cars, and to focus on the passion and emotion that people express through their vehicles while creating solutions that anticipate the future needs of urban customers.

Since the introduction of the Segway Personal Transporter (PT), Segway has established itself as the leader in the small electric vehicle space. Its approach to congestion and environmental challenges is balanced with a strong understanding of the functional needs of its customers, enabling them to do more with less. Segway has delivered more than 60,000 lithium-ion batteries to the market.

GM has been a leader in “connected vehicle” technologies since it introduced OnStar in 1996. Today, this on-board communications package connects six million subscribers in North America to OnStar safety and security services. GM has also pioneered vehicle-to-vehicle (V2V) communications systems and transponder technology. These and additional connected vehicle technologies could ultimately enable vehicles that don’t crash and drive themselves.

“Imagine moving about cities in a vehicle fashioned to your taste, that’s fun to drive and ride in, that safely takes you where you want to go, and “connects” you to friends and family, while using clean, renewable energy, producing zero vehicle tailpipe emissions, and without the stress of traffic jams,” said Burns. “And imagine doing this for one-fourth to one-third the cost of what you pay to own and operate today’s automobile. This is what Project P.U.M.A. is capable of delivering.

World’s Most Economical Car – A Volkswagen
The other day I came across an article on the “most economical non-hybrid car in the world.” The one passenger gasoline powered vehicle by Volkswagen is capable of 258 mpg and can manage a top speed of 71 mph according to published reports.

The prototype was built under extreme secrecy so there isn’t a lot of information available on VW’s newest model.

The body was developed in a wind tunnel, is 11.38 feet long, but just 4.10 feet wide and 3.38 feet high and is made completely of carbon fiber composites. To save weight, it is of course not painted. The carbon-fiber-reinforced outer skin is tensioned over a spaceframe that is not made of aluminium, but rather of magnesium, which is even lighter.

The 1-litre car is powered by a one-cylinder diesel engine, centrally positioned in front of the rear axle and combined with an automated direct shift gearbox. The crankcase and cylinder head of the 0.3-litre engine are of an aluminium monobloc construction. The naturally aspirated, direct-injection diesel engine employs advanced high-pressure unit injection technology to generate 8.5 bhp at 4,000 rpm. This gives the vehicle, which weights just 639.34 pounds

Due to the restriction of space, it was not possible to adapt an existing gearbox. For this reason, a compact, automated 6-speed gearbox is employed, which is controlled from a turn switch in the cockpit.

The interior is sportingly simple in design, yet offers enough space for two people, who can comfortably get in after folding back the turret-like gullwing door.
An extremely lightweight construction has also been employed for the seats. The seat frames are made of magnesium, and firm, yet comfortable fabric covers are used instead of a classic upholstery.

Despite the lightweight construction of all components, safety has been a major element in all phases of the development of the 1-litre car. For example, the concept vehicle’s safety equipment includes anti-lock brakes, ESP electronic stability program and a driver’s airbag. Deformation elements at the front end and the spaceframe construction provide impact and roll-over protection comparable to that of a GT racing car.

The sports-car-like design demonstrates that Volkswagen’s 1-litre car is not a spartan research vehicle, but a high-tech special vehicle. It starts with the special seating arrangement. The driver and passenger sit centrally as if in a monoposto, but in tandem. The mid-engine is installed transversely in front of the rear axle. With its complex design (double wishbones at front, DeDion suspension at rear) and combined with the low center of gravity and low overall vehicle weight, the lightweight running gear results in very agile handling.

The project team have impressively succeeded in combining driving pleasure with a level of fuel consumption never seen before.

The 1-litre car also incorporates numerous details of a practical and convenient nature. For example, there is an easily accessible storage compartment with a capacity of approximately 3 cubic feet under a separate flap in the rear; a rearview camera; automatic locking/unlocking of the gullwing door and a starter button in the cockpit that together allow keyless operation.

The concept of the 1-litre car – four wheels, low height, with two seats in tandem – gives an idea for a possible new family of vehicles, which could cover new requirements ranging from the ultra-economical vehicle, through the low-lost everyday touring vehicle for young people to the high-performance sports supercar.

I do remember when the first VW Beetles appeared on U.S. highways. It was as basic a car as you could get. With its air-cooled rear engine, the car was lacking a heater, but it did deliver on fuel economy and start a trend.

Who knows, like the Beetle, the new fuel miser might start another trend. According to reports, it is ready to be launched as a single-seater for sale in Shanghai in 2010 for a mere RMB 4,000 = US $600.