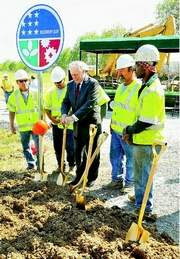 Gov. Bredesen was joined by the Tennessee Department of Transportation (TDOT) Commissioner Gerald Nicely, lawmakers and local officials at the groundbreaking ceremony in Gibson County. The Gibson County project will replace three aging timber bridges along McMurry Road in Trenton.

“The McMurry Road bridges have served the citizens of Gibson County well for more than 37 years, but are clearly in need of replacement,” said Gov. Bredesen. “This project will save the county government close to $200,000 in matching funds, will employ more than 150 Tennessee workers and, most importantly, will give the residents of Gibson County peace of mind as they travel this roadway.”

The Gibson County project is one of ten local bridge replacement projects included in TDOT’s March 20 letting. The $924,000 project was awarded to Ford Construction Company of Dyersburg, TN and involves the replacement of three county owned and maintained bridges. Normally, the county would be required to provide a 20 percent match in order to receive bridge replacement funds; however, that match is waived for projects funded through the Recovery Act.

“From the paving crew to the surveyors to the men and women who mix the asphalt and drive the dump trucks, this is the first of many projects that will put Recovery Act funds to work employing Tennesseans,” said Commissioner Nicely. “TDOT staff considered several factors in determining which projects would be funded by the Recovery Act. The most important was that a project be ready to go to construction by July.”

TDOT also gave consideration to projects that can be completed in three years and are in economically distressed areas. TDOT plans to let all ARRA funded projects by July, which means all ARRA funded projects will be underway this summer. Some 24,000 direct and indirect jobs are estimated to be created or maintained through Recovery Act infrastructure funding in Tennessee.

Tennessee received $572 million in Recovery Act funds and immediately put the first projects up for bid. $85.8 million was distributed directly to the state’s eleven Metropolitan Planning Organizations and the City of Murfreesboro leaving $486.2 million for distribution by TDOT.

Gov. Bredesen has identified more than 450 projects statewide to be funded with the stimulus money, proposed bridge bonds and TDOT’s regular budget. The federal government requires all stimulus money to be committed quickly to put Americans to work. The Legislature is currently considering the transportation budget for approval.

Earlier in the week, Gov. Bredesen released a final list of projects.

The proposal, which has been presented to the Legislature, includes 132 highway and bridge projects in TDOT’s Region One, 78 in Region Two, 122 in Region Three and 128 in Region Four.

“The Recovery Act is fundamentally about creating and retaining jobs during one of the toughest economic times our nation and state have faced since the Great Depression,” said Gov. Bredesen. “This three-tiered program represents a record investment in Tennessee’s transportation system. The Recovery Act, along with the bridge bonding and TDOT’s regular program, will put thousands of Tennesseans to work rebuilding and strengthening one of Tennessee’s largest economic drivers, our transportation system.”

“Not only will these transportation projects help create or save tens of thousands of jobs for Tennesseans, the end result of this investment will be a more reliable transportation system,” added Nicely. “This three-tiered program represents a responsible, balanced and community based approach to transportation. Years of planning and study have gone into each of the projects funded for construction.”

Projects to be funded through ARRA include:

Region One (Knoxville): a project to widen State Route 66 in Sevier County which has received strong support from state and local leaders. Another 55 bridge repair or replacement projects in Region One are funded through bridge bonds and 29 other projects are funded through TDOT’s traditional Three-Year Multimodal Work Program.

Region Two (Chattanooga): a project to reconstruct State Route One/US70-S in Warren County between Centertown and Spring Valley Road which has received strong support from state and local leaders. Another 21 bridge repair or replacement projects in Region Two are funded through bridge bonds and 18 are funded through TDOT’s traditional Three-Year Multimodal Work Program.

Region Three (Nashville): a project to construct a Bypass around Shelbyville which has received strong support from state and local leaders. Another 45 bridge repair or replacement projects in Region Three are funded through bridge bonds and another 27 projects are funded through TDOT’s traditional Three-Year Multimodal Work Program.

Region Four (Jackson and Memphis): a project to widen US64/SR15 from near SR225 to Sandy Flat Road in McNairy County, which was strongly supported by former Senator John Wilder and former Representative Randy Rinks. Another 65 bridge repair or replacement projects in Region Four are funded through bridge bonds and 16 other projects are funded through TDOT’s traditional Three-Year Multimodal Work Program.

The Construction Challenge workforce development program of the Association of Equipment Manufacturers (AEM) has been named to the “Associations Advance America” 2009 Honor Roll, a national awards competition presented by the American Society of Association Executives (ASAE) & the Center for Association Leadership.

The
annual awards program, now in its 19th year, recognizes associations that contribute to the advancement of American society through innovative programs in areas including education, skills training, standards setting, business and social innovation, knowledge creation, citizenship and community service.

AEM partners with Destination ImagiNation to produce the Construction Challenge, which is a creative problem solving program designed to engage teens through a hands-on, educational experience and to introduce them to careers as engineers, equipment technicians, and manufacturing professionals.

Now in its second year, the Challenge offers an opportunity for students, teachers, parents and community leaders to learn more about the rewarding careers available in the construction industry and how critical off-road equipment is to creating and maintaining the high quality of life enjoyed in North America and Europe, as well as by increasing numbers in the developing world.

Even before the renewed focus on rebuilding infrastructure, the construction industry was concerned about meeting demand for trained workers as a large portion of its current workforce enters retirement.

“The success of the Stimulus Package, the rebuilding of our infrastructure and the training of millions of workers will be directly related to the success of future generations of Americans,” said Dennis Slater, president of AEM. “The Construction Challenge is one way our industry is helping prepare and invest in that future. We also hope everyone has a little fun and gets inspired along the way.”