The National Demolition Association (NDA) and the Concrete Sawing & Drilling Association (CSDA) announce a reciprocal association agreement that will promote the exchange of information between the groups to enhance the safety and professionalism of their industries.

“Because our industries often work closely together, we think a reciprocal alliance will benefit both groups,” said Michael R. Taylor, CAE, executive director of the NDA. “We think it’s natural to encourage a closer working relationship between our associations to foster a spirit

of cooperation,” added Patrick O’Brien, executive director of the CSDA.

CSDA is an international organization of more than 550 contractor, manufacturer, distributor, and affiliated member companies from the concrete construction and renovation industry. Its mission is to promote sawing and drilling contractors and their methods, as well to provide a forum for members to share their ideas, needs, and concerns in a constructive framework to further enhance concrete sawing and drilling technologie

NDA is the leading global trade organization representing the demolition industry. At present, the association counts among its members more than 1,100 companies in the United States and Canada, as well as many companies from around the world. Membership includes not only demolition contractors, but also general contractors, civil engineering firms, and recycling, landfill, and salvage operations. The association’s efforts help members stay abreast of environmental, regulatory and safety matters, keep regulators informed about issues facing the industry, increase public and industry awareness, and provide members with networking opportunities and information on the latest technical advances in equipment and services.

CSDA has been fostering a spirit of cooperation with other associations since 1993 when it was instrumental in creating the International Association of Concrete Drillers and Sawers (IACDS). IACDS is an umbrella organization of sawing and drilling associations from Australia, Austria, Germany, Italy, Japan, Netherlands, Sweden, Switzerland, United Kingdom and the United States. Other reciprocal members of CSDA include organizations like the American Society of Concrete Contractors (ASCC), CSDMA, Florida Independent Concrete & Associated Products, Inc. (FICAP), SMI and the Tennessee Ready Mixed Concrete Association (TRMCA).

This type of cooperation between industry associations can only help strengthen them in these confusing and challenging times. The importance of industry trade association has changed radically over the years. Associations like CSDA and NDA provide members and the industry vital training and educational information and material.

“Our relationship with Caterpillar’s Remanufacturing Division allows us to take advantage of their global scale and footprint, world-class technology and significant focus on product availability and reliability,” commented David Renz, vice president – Sales & Marketing and Aftermarket, Eaton’s Truck Group. “This new relationship will allow us to respond to our customers’ and business partners’ needs by continuing to provide them with the high-quality Eaton remanufactured components they have come to expect.”

“This agreement strengthens Caterpillar’s remanufactured product portfolio and further solidifies our position as the world’s leading remanufacturer,” commented Steve Fisher, Caterpillar vice president with responsibility for remanufacturing. “We are very excited about this relationship and the future opportunities it presents for both Caterpillar and Eaton.”

“For our customers, nothing will change regarding distribution of our genuine remanufactured transmissions through truck OEMs, OEM dealers and associated distribution channels,” said Renz. “We expect Caterpillar’s significant remanufacturing base and our strong product line to provide our customers with unmatched quality, service and availability.”

John Deere Power Systems (JDPS) has announced the technology solutions it will use to meet the stringent Interim Tier 4/Stage III B mobile off-highway emissions regulations for the company’s complete lineup of industrial diesel engines. These regulations require at least a 90 percent reduction in particulate matter and up to 50 percent reduction in nitrogen oxides (NOx) from previous Tier 3/Stage lll A requirements.

JDPS will continue to offer the familiar John Deere PowerTech displacements of 2.4L, 4.5L, 6.8L, 9.0L and 13.5L. Power ratings will also be similar to the Tier 3/Stage III A offerings.

For all of its engines 75 hp and above, John Deere will start with its proven Tier 3/Stage III A PowerTech Plus engine platform, which includes cooled exhaust gas recirc 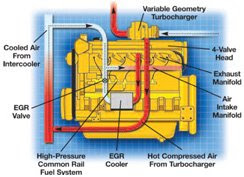 ulation (EGR) for NOx control, and add an exhaust filter for reducing particulates. Displacements in this power range include the 4.5L, 6.8L, 9.0L and 13.5L in-line, four and six-cylinder engines, all of which feature a four-valve cylinder head, high-pressure fuel system, turbocharging and an air-to-air aftercooling system. As with previous emissions tiers, John Deere will offer appropriate levels of technology for specific customer needs in a wide variety of applications.

During Tier 3/Stage III A, John Deere has accumulated significant operating hours with these technologies in off-highway applications and has established a proven record of reliability. Other engine manufacturers are just now considering the use of these effective technologies in their off-highway Interim Tier 4/Stage III B product offerings.

“Our proven record with cooled EGR was a major driver in our decision to continue using it for Interim Tier 4/Stage III B,” said John Piasecki, director of worldwide marketing, sales and customer support for JDPS. “John Deere engines have a strong reputation of performance, durability and reliability, and we are designing our new engines to exceed those expectations.

“After much evaluation and testing, we found that an exhaust filter and the use of cooled EGR, coupled with our proven Tier 3/Stage III A PowerTech Plus engine platform, is the best Interim Tier 4/Stage III B solution for meeting emissions and for delivering the performance, reliability, durability and low operating costs our customers have come to expect from John Deere engines,” Piasecki said.

lyst (DOC) and a diesel particulate filter (DPF) specifically to meet the demands of off-highway applications. The DOC reduces carbon monoxide, hydrocarbons and some particulate matter. The downstream DPF traps and holds particulates remaining in the exhaust stream. Trapped particles are eventually oxidized within the DPF through a process known as regeneration. Under normal circumstances, the regeneration process will not have an impact on machine operation and will not be noticeable to the operator. Another benefit of the exhaust filter is that it replaces the need for a muffler in most applications.

The Interim Tier 4/Stage III B regulation effective date for 174 hp and above mobile engines is January 1, 2011. John Deere engine models in this power class include the 6.8L, 9.0L and 13.5L in-line, six-cylinder engines. For Interim Tier 4/Stage III B, the cylinder head, fuel system, cooled EGR, variable geometry turbocharger (VGT) and air-to-air aftercooling systems will be updated but will be similar to Tier 3/Stage III A configurations. The engine control unit (ECU) was developed and manufactured by Phoenix International, a business unit of John Deere’s Intelligent Mobile Equipment Technologies. Compared to its Tier 3/Stage III A counterpart, it will provide twice the RAM, double the processing speed and four times the program memory of the previous version to allow for more advanced engine control. John Deere is one of the few engine companies that designs and manufactures its own controls, allowing for a more integrated emissions solution.

Interim Tier 4/Stage III B regulations for engines 75 hp to 174 hp are effective January 1, 2012. For its engines in this power range, John Deere will also use a cooled EGR system in combination with an exhaust filter. These engines will be available in 4.5L and 6.8L displacements and will feature full-authority electronic controls, a 4-valve cylinder head, air-to-air aftercooling, a high-pressure common-rail fuel system and a wastegate or variable geometry turbocharger.

John Deere has optimized the package size for its Interim Tier 4/Stage III B engines. All John Deere Interim Tier 4/Stage III B engines will feature a similar package size as their Tier 3/Stage III A counterparts. John Deere’s engines with cooled EGR and an exhaust filter will require similar space as the Tier 3/Stage III A engine and muffler they replace. Engine-mounted or remote-mounted exhaust filters for the 4.5L and 6.8L models below 174 hp will be available for increased application flexibility.

Also, 4.5L and 6.8L engines below 174 hp will realize similar levels of fuel economy that cooled EGR provided in the 174 hp and above Tier 3 engines/Stage III A. In some cases this can be as much as 5 percent improvement compared to the Tier 3/Stage III A PowerTech M and E models they replace.

With its Tier 3/Stage III A engines featuring cooled EGR and VGT technologies, John Deere was able to achieve record fuel economy gains over its Tier 2/Stage II models and claim best-in-class fuel economy. For example, the John Deere 8430 tractor powered by a PowerTech Plus 9.0L engine set fuel economy records during independent testing at the Nebraska Tractor Test Lab, consuming nearly 9 percent less fuel than its Tier 2/Stage II counterpart. The 8430 is the most fuel-efficient row-crop tractor ever tested by the Nebraska Tractor Test Lab. Because John Deere Interim Tier 4/Stage III B engines 174 hp and above continue to use these same technologies, the expectation is they will maintain similar fuel-economy leadership in the off-highway industry. Extending use of these technologies into the 75 hp to 174 hp power range, the 4.5L and 6.8L models are also expected to experience world-class fuel efficiency.

In choosing a solution for Interim Tier 4/Stage III B, John Deere has elected not to use SCR. An SCR system injects liquid urea into the exhaust stream to reduce NOx. While it is effective, it also requires that the vehicle or machine be fitted with a separate tank, a sophisticated urea injection system and a tamper-proof diagnostic system required by regulation. Since urea freezes, heating systems for the tank and delivery lines are required. In addition, urea is not conveniently available in many parts of the world currently, especially for off-highway applications, which creates availability and storage concerns. Most importantly, operation of John Deere’s cooled EGR solution does not require operator intervention. The operator doesn’t have to deal with the cost and hassle of a second fluid and doesn’t have to go through SCR training. SCR may be an appropriate technology for the future, when the technology is more developed for off-highway applications; however, for Interim Tier 4/Stage III B, the cooled EGR and exhaust filter technology approach provides a proven solution with the best value product to OEM and end-users.

“For Interim Tier 4/Stage III B, we’re not only looking at fuel economy, we’re also looking at total fluid economy. We have prioritized the needs of the owner and operator during every step of developing our complete Interim Tier 4/Stage III B lineup. The single-fluid approach of cooled EGR means the technology will be easy for operators to use, and they won’t have to incur the cost of diesel fuel plus the urea required by SCR systems. We are using the most operator-friendly technology available today,” Piasecki said. “We chose to take the route of cooled EGR because we believe it’s the right technology at this point in time.”

John Deere Power Systems (JDPS) has announced a new naming convention and ratings for its Interim Tier 4/Stage III B engines. The names will capitalize on the PowerTech brand but add a three-letter suffix that designates the engine’s technology package. An example of the new names is the PowerTech PVX 6.8L. The new ratings for the John Deere Interim Tier 4/Stage III B lineup will apply to the five models in the 174 hp and above power class. The three letters define the engine’s technology platform, turbocharger and exhaust filter. All of the John Deere Interim Tier 4/Stage III B engines with ratings 174 hp and above are designated “P,” indicating the Tier 3/Stage III A PowerTech Plus technology platform that features 4-valve cylinder heads, cooled exhaust gas recirculation, full-authority electronic engine controls, high-pressure fuel systems and air-to-air aftercooling. These engines use either a variable geometry turbocharger (designated “V”) or series turbochargers (designated “S”), and they also feature an exhaust filter (designated “X”). 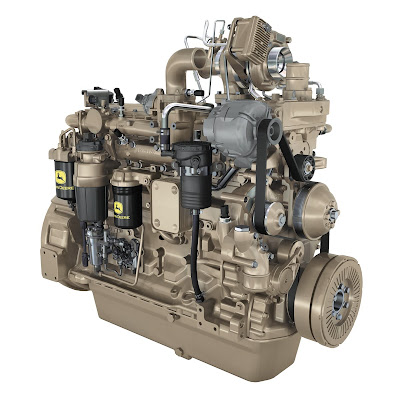