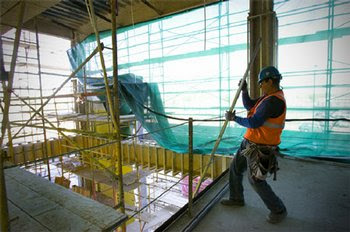 More contractors are competing for government projects in San Diego County because the bad economy has forced private sector construction jobs to dry up, it was reported Tuesday.

The increased competition, coupled with lower material costs fueled by lower demand, has caused the bids on several projects to come in at less than projected, The San Diego Union-Tribune reported.

According to the newspaper, the low bid for a 4.5-mile south segment of Interstate 15 came in at $48.4 million, down from a projection of $67.6 million.

In El Cajon, the low bid for a public safety center came in at $40 million, down from a projection of $48 million. 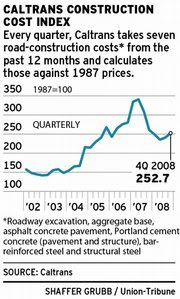 Circumstances are so favorable that San Diego is considering borrowing $103 million from Bank of America to fund backlogged projects such as street repairs.

According to the San Diego Association of Governments, most of the region’s $285 million share of the federal stimulus money headed for San Diego County will go to pay for transit and highway projects.

Jim Ryan, the executive director of the local chapter of Associated General Contractors, said that because the stimulus money will not flood the market all at once, it’s unlikely to cause a price spike.

“I always say there is a sale going on in the construction industry right now,” Ryan said. “If I have a project, I would want to put it out right now.”

The National Association of Manufacturers (NAM) warns that deteriorating roads and rails pose a “serious threat” to the competitiveness of the U.S. economy and manufacturing.

That warning was stressed within NAM’s “Legislative Agenda for Economic Recovery and Job Creation” for the 111th Congress.

“The vitality of U.S. manufacturing cannot be taken for granted,” said NAM President and CEO John Engler. “It requires hard work and smart policies to keep U.S. manufacturing competitive in the global marketplace. The basic challenge is to retain and create jobs. A strong manufacturing sector is vital to meeting this challenge.”

NAM said several issues will likely influence the highway bill reauthorization, which expires Sept. 30. Among them are a proposed federal bonding program to infuse states with additional funds for infrastructure projects, the use of public-private partnerships, and a federal effort to reduce transportation bottlenecks.

What do you think of an infrastructure bank? The economic crisis we’re suffering now is the perfect time to decide that we need to change some of the ways government has of doing the people’s business. Sen. Chris Dodd (D) of Connecticut has offered a bill that would create an infrastructure bank. It would be a bipartisan entity that would streamline the process of reviewing and authorizing major projects. It would provide federal investment capital for approved projects and use that money to leverage private investment.

Obama supports the establishment of such a bank. When asked about this in an interview with Bob Herbert of the New York Times, Obama said, “The idea of an infrastructure bank, I think, makes sense.” But he suggested that there would be stiff resistance from lawmakers on both sides who are unwilling to give up their influence over the selection and financing of lucrative infrastructure projects.

Herbert goes on to say that President Obama seemed optimistic about the prospects of moving ahead with some additional infrastructure spending and that he “‘would like to see some long-term reforms” in the way transportation money is spent. He acknowledged that the nation’s infrastructure “needs are massive, and we can’t do everything.”

What Americans need is new employment on a massive scale and one of the most effective ways to get that started is to invest extraordinary amounts in the nation’s infrastructure, to rebuild America in a way that creates a world-class platform for a sustainable 21st-century economy.

President Obama’s Stimulus Package is only the first step.