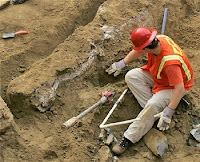 Earlier this month, construction crews unearthed a mammoth skull and tusks at the site of the new Thomas Jefferson School of Law in downtown San Diego’s East Village. On Thursday, excavators found the skeleton of a whale beneath the mammoth bones, law school officials said.

A skeleton believed to be that of a baleen whale was found just beneath the spot where crews discovered the bones of an Ice Age
Columbian Mammoth more than three weeks ago. So far, several ribs, a piece of skull and part of the animal’s lower jaw have been unearthed. The discovery was located about 12 feet directly below the mammoth fossils found a few weeks ago.

Construction crews stumbled upon the mammoth bones, believed to be 500,000 years old, at 11th and Island Avenues. A paleontologist from the San Diego Museum of Natural History was called to determine the age of the find. The 8-to-10-foot-long tusks and skull were buried close to 20 feet below ground, according to the school’s spokesman Chris Saunders.

San Diego Natural History Museum Paleoservices Department Director Tom Demere called it an “unprecedented find.” It is the only marine mammal dating from the Pleistocene era ever found in San Diego County, he said.

The law school’s dean said, so far, the discoveries have not delayed construction. He says crews will continue to dig around the whale fossiles until they can all be removed. They’ll be taken to the Museum of Natural History in Balboa Park. The school is scheduled to be completed by the 2010-2011 school year.

(Note:Construction workers are discovering fossils regularly in California these days. We just told you on 2/19 about “Zed” being unearthed in Los Angeles.)

Seawolves Rank 2nd Out Of 13 At ASC Student Competition

This is only UAA’s second time competing in this annual event.

The winning team, Colorado State University, has a construction management program that is one of the largest in the country. The university has been competing in the ASC Student Competition for many years and has won the commercial construction category several times. 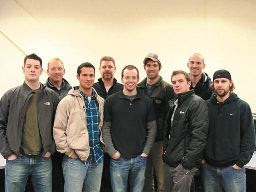 San Diego County is on a construction spree. The Pentagon’s budget, excluding the stimulus, is crammed with projects for the region, boasting the world’s largest concentration of military bases, 16.

For example, Marine Corps Base Camp Pendleton plans to spend $2.1 billion on construction in the three fiscal years ending with 2010. A large transfer of Marines and the need to replace 1960’s-era structures are contributing factors. The work has the potential to employ 10,000 workers in the coming years, base authorities say.

Camp Pendleton isn’t the only mega-construction site. Countywide, there is work in place of $728 million, and plans to award $900 million more in contracts before Sept. 30.

Tim Penick, co-owner of T.B. Penick & Sons, says he hasn’t seen a building boom like this in his 25 years of military contracting.

With the slowdown in other forms of construction, it’s more than the usual names competing for projects. Tex Barnhart, executive director of operations for the Barnhart subsidiary of Heery International, says he sees competitors who have traditionally not pursued federal work in San Diego before.

Projects drawing familiar names and new competitors include the following:

• At Naval Air Station North Island, Barnhart is kicking off work on $24 million worth of upgrades to Berth Lima, the place where the region’s third aircraft carrier will tie up. “They’ve got a ship coming and we’ve got to get it done,” said Barnhart, who noted the speed with which the Navy took the project through review and bonding.
• At Naval Base San Diego, the Navy and Virginia-based Clark Realty Capital are wrapping up work on the $322 million Pacific Beacon high-rise barracks project. Its four 18-story towers contain 941 apartments under private management.
• At Marine Corps Recruit Depot, the military plans to solicit bids this month for two barracks projects worth $78 million. It could award the projects by May.

Road crews will begin work on US-127/I-496 between I-96 and Trowbridge Road in a few weeks. They’ll resurface four miles of road and repair bridges at Jolly, Forest, and Mt. Hope Roads.

The Dunckel Road bridge will be replaced with a new, wider bridge. Construction starts May 11th, after Michigan State University wraps up it’s school year. It should re-open in mid-August, before the next school year begins. The Dunckel Road ramps will remain open.

When the highway work begins, construction crews will close lanes overnight – between 8 p.m. and 5 a.m.

From the end of March until early July, both north and southbound lanes will be closed during
the day, as well.

And for three weeks beginning late March, the ramp from westbound I-96 to northbound US-127 will be closed.

For up-to-date information on this project, visit MDOT’s website at http://www.wlns.com/Global/www.michigan.gov/laneclosures.