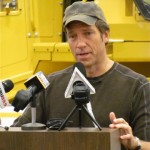 Caterpillar Inc. recently announced that it was partnering with Mike Rowe, the creator and star of the Discovery Channel’s Dirty Jobs and the founder of mikeroweWORKS.com. This past September, Rowe stopped by the East Peoria, Illinois manufacturing facility to meet with the media for a Q&A session to discuss the partnership, as well as spend time with the Caterpillar employees that work at this location and receive a tour of the plant.

It was Rowe’s dedication to the trades and Caterpillar’s commitment to its customers that prompted the two to join forces. Rowe will be spending time with Caterpillar customers and dealers to get a 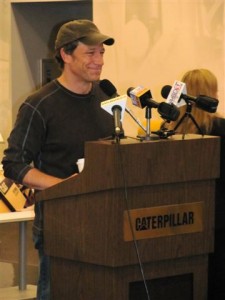 real world perspective on their jobs and how the two partner to be successful. These encounters will be featured on cat.com and at Caterpillar dealerships across the country, and will be used to demonstrate the solutions that Caterpillar dealers provide their customers throughout the lifecycle of the equipment.

Rowe, who calls himself a perpetual apprentice, has performed more than 300 jobs in locations around the country via his show,Dirty Jobs. His website, mikeroweWORKS.com is dedicated to and for people in the trades to meet, discuss relevant topics and learn what is the latest in the industry. He said that his partnership with Caterpillar was “inevitable” because the two share the same work philosophy. “I see Cat equipment and the hard working people operating it around the world, building and creating infrastructure and I’m excited to go beyond the machine and talk with the people who are actually making it happen,” said Rowe. “There are very few companies that built this country, that built this world. Cat is one of those companies and it’s very rewarding to be around that. It’s gratifying and humbling to be here.”

Mike Rowe of “Dirty Jobs” fame is coming to town to do his dirtiest job yet – speaking out to Members of Congress, staffers, and the media about the importance of manufacturing to the health of our economy and American jobs. He’ll be introducing local workers from across the U.S. who depend on manufacturing to tell their stories of how they help “make America.” http://www.site-kconstructionzone.com/?p=3940