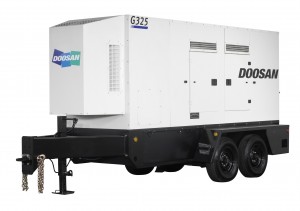 Doosan Portable Power has released four models in their Tier 4 Interim (Tier 4i) mobile generator lineup. The G150, G190, G240 and G325 mobile generators are new to the lineup of 10 Doosan models ranging from 25 to 570 kVA and became available December 1, 2011.

These models complete Tier 4i development from Doosan Portable Power for products with power ratings greater than 174 horsepower and have been designed for the implementation of Tier 4 final (Tier 4f) technologies effective in 2014. In addition, Doosan is finalizing the development of new G70, G85 and G125 models to meet the 2012 Tier 4i regulations for the respective power ratings. New G25 and G45 models will meet Tier 4f regulations required in 2013.

“Doosan Portable Power has been developing emissions related product innovations since 1996 with dedicated engineering and design,” says Todd Howe, manager of global generator products for Doosan Portable Power. “We proudly premiered the world’s first 2011-compliant Tier 4i generator at CONEXPO-CON-AGG. These new Tier 4i models have been substantially redesigned from their predecessors to incorporate numerous customer focused innovations in addition to achieving emissions compliance.”

All features of the new generators are designed to maximize the operator experience. Controls are simplified for easy operation, connection panels are made more accessible for improved safety and convenience, and sound levels are reduced between 2 to 5 dBA to ensure quieter operation. Longer runtime — exceeding 24 hours at any load factor — is also achieved with these new generators due to increased onboard fuel capacity.

The operator-preferred analog control panel has been enhanced with large, brightly lit meters for at-a-glance monitoring. And the onboard engine diagnostic display panel from Doosan now includes the controls and indicators required to operate and maintain the aftertreatment regeneration system that is a key component of the new Tier 4i technology to meet engine emissions.

Doosan Portable Power offers simple-to-operate controls, and easy equipment serviceability. New features, such as the addition of a Voltage Selector Switch on the G240 and G325 simplify the set-up and connection of the machines on the jobsite. Dual frequency capability comes standard on the Tier 4 generator portfolio to expand the versatility of the machines to power 50Hz applications with the simple flip of a switch.

All current Doosan mobile generator models with Tier 2 or Tier 3 engines continue to be available through the use of the federal Environmental Protection Agency (EPA) Transition Program for Equipment Manufacturers (TPEM) — commonly known as the Flexibility Provision — until each successive tier change is complete. 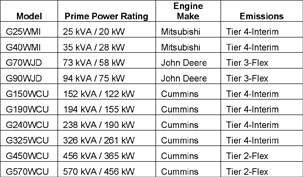