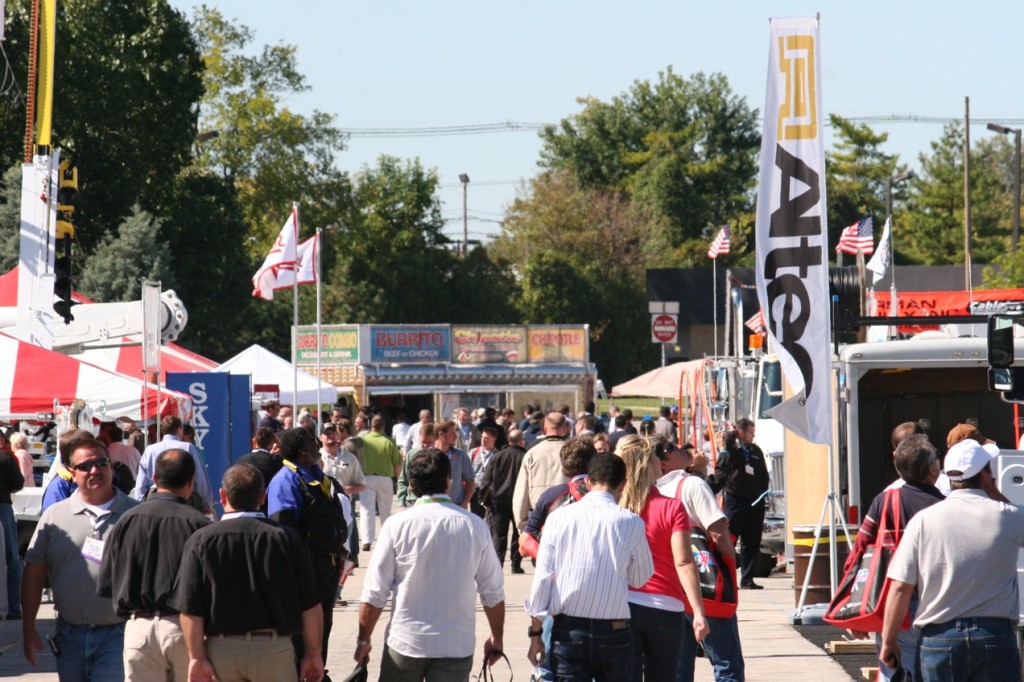 The last day of ICUEE, the Demo Expo, was a repeat of the opening day. Dark clouds shrouded the fair grounds threatening to drench attendees and interfere with their efforts to operate the equipment. The rain held off until just after 1 PM when the skies opened wide and dumped countless gallons of water on the final hours of the show. At that point it was obvious that the storm wouldn’t pass before the 3 PM closing.

Needless to say, that pretty much brought the outside activities to a screeching halt and dampened the spirits of the people walking through the inside displays. Thunder rocked the building and drove people out to their cars or moved them on the way to the airport, with hopes of getting out before the inevitable flight cancellations started.

In spite of the weather, the show was very successful. Contractors, utility companies, municipalities and dealers where in Louisville checking out the newest equipment, cutting deals and moving ahead. A positive attitude prevailed and wasn’t dampened by the drenching rain. During one booth visit the company representative had to excuse himself, turning us over to another person, so he could go and close a deal with a customer on the purchase of a new piece of equipment.

The manufacturers that we did visit were more than happy about the results of the show. Several said that the customers who were visiting their booths were serious and interested buyers. From a long-time ICUEE attendee (I’ve been to every show since the very beginning) the most noticeably absent attendee at this year’s show was the “reward-attendee.” I use this term to describe show attendees who are given the opportunity to attend shows like ICUEE or ConExpo as a bonus for outstanding achievements on the job or at work. They come with their families or friends… There weren’t many reward-attendees at this year’s show.

The feeling that I got from the show was that the recovery was inching ahead. Like anything massive, restarting from stop is a slow process. You don’t want to be sitting around waiting for it to start because if you do, chances are good that by the time you start to move it will have gathered enough forward momentum that you could end up lost in the dust. There’s an old saying that goes something like, there are three kinds of people in the world: the ones that wait for things to happen; the ones that make things happen; and the ones who say, “what happened.” Make things happen… 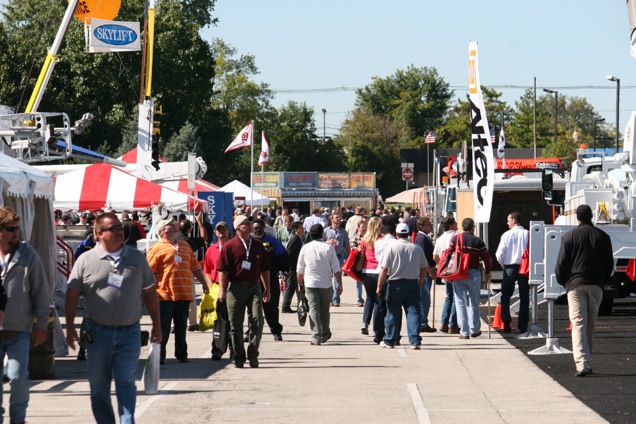 The schedule for the final day only included one booth visit, with Parker Hannifin Corporation to get information on its new tracking system. The new Parker Tracking System (PTS) will keep vehicles and machines running longer by increasing the speed, timing and accuracy of acquiring replacement hose assemblies. According to Parker, using PTS can eliminate hours of costly equipment downtime.

PTS, developed for the United States by Parker’s Hose Products Division, has two key components. First are uniquely encoded tracking labels that incorporate visual data, barcodes and optional RFID (Radio Frequency Identification) technology. The labels are generated by special printers and are affixed to the hose assembly at the time it is made. The second component is a Web-based PTS software system that can be accessed securely through an Internet connection.

Each tracking label code is cataloged in the PTS database. The code identifies several key pieces of information about the hose assembly – for example, where and when it was made; what hose, fittings and accessories were used; and the length of the hose. Special OEM features will include details about the asset in which the assembly is installed as well as other information.

Today, customers must typically remove old hoses, drive to their local store and wait while the new assembly is made. PTS dramatically expedites this process by making “call ahead” or “site delivery” service possible. The result is additional machine uptime that can dramatically improve the customer’s bottom line.

With PTS, customers can reference the code on the assembly tracking label and relay that information to their nearest Parker distributor, ParkerStore or mobile Parker HOSE DOCTOR. The Parker location can then prepare an identical replacement assembly before the customer arrives, or the HOSE DOCTOR can deliver the finished assembly directly to the customer’s site.

PTS users will also benefit from reporting tools that provide access to a variety of data that can be used to drive quality control and continuous improvement programs. Furthermore, documentation of the original bill of materials ensures hose assembly replacement to exact OEM specifications and compliance with applicable industry and safety standards. This is particularly important for mining, military, aerospace and other regulated industries.

Presently, PTS is in use in more than 18 countries, making the system a powerful resource for global OEMs seeking an intelligent tagging, tracking and reporting solution for fluid conveyance products.

While a colleague, Jill Paskoff was gathering the Parker information, I was interviewing Derek Hutchins, president and owner of Hutchins Telecom, a Louisville-based contractor and Jason Greer, machine sales and rental representative for Whayne – The Cat Rental Store. Joining me for this interview were Sharon Holling, media communications director for Caterpillar, John White, publisher and owner of the ACPs and a journalist from another magazine.

A full-detailed article will arrear in a future issue of several ACP magazines. The immediate take away from this interview is that, Hutchins, who has only been in business for three years has several jobs going right now and several more pending. During the interview, when we asked him about the recession, his comment was, “What recession? I have been busy since I launched the business and don’t plan o slowing down.”

Hutchins is primarily engaged in public and/or governmental projects. His feelings are that there is a lot of work available, you have to go out and look for it and then be willing to do it. He said that he often takes jobs that other contractors don’t want to tackle. During the discussion he pointed out the fact that there is a lot of construction activity going on in the school sector. He said that in Kentucky and Missouri the water and sere jobs have become very competitive with many ending up in the hands of inexperienced contractors.

Hutchins said that his biggest stay-awake concern was labor.  Even though unemployment is at near record levels, and beyond in some states, there is still a shortage of skilled professional laborers. He said that the young people looking for jobs expect to be paid at the same rate as seasoned many-year experienced professionals and simply refuse to work for less.

The contractor and dealer rep had a lot of information to share and were very cooperative. If you are interested in learning how a young contractor, who’s only been in business for 3 years can be so successful you’ll have to wait to read the article that will appear in Construction Digest and Midwest Contractor, two ACP magazines.

During the course of this show, we learned about four contractors who were making serious contributions to the continued growth and development of the industry through creative thinking. One was directly involved in the creation of the Vermeer  wind-farm cable plow;  another had invented the laser directional guidance system for horizontal drills; a third figured out a way to improve the functionality of air excavating as a replacement for water excavating; and the fourth had the foresight  to convince his municipal board that going over budget to purchase a new hybrid utility was a smart thing to do. If you’d like to read these stories you’ll have too wait  since they won’t be published for a couple more weeks… sorry.

Over the next several days I will be posting more of the 149 new product and more details on the product introductions that I sat through. The show is over but the information that comes out of it will help contractors survive today’s challenges and join in the recovery that is underway rather than waiting for it to start.