Mother Goose and Grimm by Mike Peters is one of my favorite cartoon strips. One of the most enjoyable episodes that Peters published had Grimmy, the great big gangly yeller dog chasing cars down the street. In each of the leading panels Grimmy is left behind sucking up exhaust smoke and fumes as the car easily managed to escape. In the final panel there he is lying on the ground with a Volkswagen Beetle in his mouth. The thought balloon read, “Uh… What do I do now.”

Earlier today the Senate and House leaders announced that they had reached agreement on a $789 billion economic stimulus bill, clearing the way for final Congressional action and President Obama’s signature, perhaps by the end of the week.

Ninety minutes later it was announced that there were a couple of snags that have subsequently been ironed out through compromise negotiations.

Senator Susan Collins of Maine, a centrist Republican whose role has been crucial, said the final package allocates $150 billion in spending on infrastructure, including transportation facilities and considerable tax relief.

Despite intense lobbying by governors, the final deal slashed $35 billion from a proposed state fiscal stabilization fund, eliminated $16 billion in aid for school construction and sharply curtailed health care subsidies for the unemployed.

Let’s hope that congress doesn’t find itself in a “Grimmy mode” wondering what to do with the money now that it is available.

Winter is waning so we should be ready to crank up the equipment and start moving dirt, repairing bridges that are in bad shape and laying down new pavements. 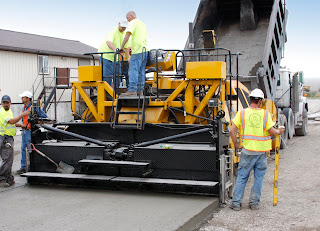 The RCC screed attached to the GOMACO RTP-500 rubber-tracked placer provides a durable paver capable of handling RCC mix designs. The GOMACO-designed auger-style receiving hopper on the RTP-500 features a working capacity of 4.75 cubic yards. A new hose hanger allows the bucket to be removed for fast and easy conveyor cleanout without having to disconnect any hoses. A 14-inch diameter auger, with speeds up to 80 rpm, moves the material to the high-speed transfer conveyor. Shaft-mounted eccentric vibrators provide vibration for emptying the hopper after each load and increased material flowability. A 36-inch wide transfer conveyor, with increased throat clearance, moves material to the rear at speeds up to 484 fpm.

The RTP-500 is propelled by a friction-drive track system with a trave
l speed up to nine miles per hour for job-site mobility and an operating speed up to 110 fpm. The operator’s platform can be positioned in one of five locations for the ultimate in visibility. The RCC screed attachment adds to the versatility of the RTP-500 and can process concrete, asphalt or other material.

The CT315 becomes Deere’s first radial lift compact track loader, as well as its smallest, with a 12.6-inch-wide track and a narrow overall machine width of just over 60 inches. 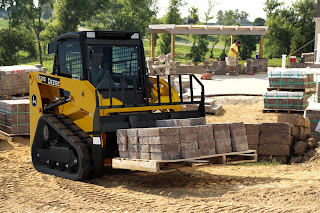 The CT315 is compact and has 1,500-pound rated operating capacity. Its cushioned bucket and lift cylinders provide smooth deceleration at the end of the boom-lower position and also cushion the bucket when curling and dumping a load.

The CT315 offers a 360-degree view that’s uninterrupted to the sides, both above and below the lift arms. This means the operator can also see the tracks and the ground around the machine with the boom in the resting position. The low-sloped rear hood allows excellent rear visibility.

This compact track loader has the standard Deere 60/40 weight distribution from the back to the front of the machine that gives the operator stability and maneuverability under load.

The CT315 cab is designed with the operator in mind for optimum comfort, visibility and functionality. Twin bucket cylinders mounted on each side of the lift arms provide wide opening to make it easy to enter and exit the operator station. Standard features include high-back ergonomic and adjustable seating and armrests that adjust for comfort during operation. An optional in-cab power Quik-Tatch makes effortless attachment connections from the operator’s seat with a simple push of a button.