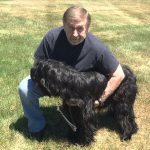 Traditionally August is hot, humid, the vacation month, the yellow-cone-traffic-jamb-detour season; long weekends; yard work; painting; planning; fixing. It’s a busy time for everyone especially the construction industry. Is it as busy as it should be; needs to be?

By this time we know who is running for the presidency and what they are saying they will do. It’s not only the presidential who are trying to convince us they are what we needs it’s also people running for congress the house and the senate.

I recently received a press release from the Associated Builder and Contractors, ABC, which I would normally have run as a new item but because November is approaching faster than the end of summer I thought I’d share it with you now.

Labor Market Dynamics Cause for Concern

Despite a broader U.S. labor market rebound in June, the construction industry failed to add jobs for a third consecutive month, according to an analysis of today’s U.S. Bureau of Labor Statistics report by Associated Builders and Contractors (ABC). The construction industry’s employment level remained essentially unchanged in June.

“The construction industry unemployment rate declined to 4.6 percent in June from 5.2 percent the previous month, but not for the right reasons,” said Anirban Basu, ABC’s chief economist. “The overall national unemployment rate rose in June as labor force participation edged higher. However, the size of the construction industry labor force shrank. This may be an indication that as other segments of the U.S. economy continue to add jobs, a growing number of construction workers and construction jobseekers are shifting to other industries.  There are many implications associated with this pattern, including relatively faster wage growth despite the recent flattening in nonresidential construction spending.

“As has been the case for many months, the most significant sources of weakness in construction activity and hiring relate to public spending,” said Basu. “Despite the passage of a federal highway spending bill late last year, heavy and civil engineering contractors, many of whom are engaged in work on roads and bridges, have been trimming employment. Not only did this segment shed jobs in June, but employment in this sector is slightly less than it was a year ago.

“The Bureau of Labor Statistics reported this morning that the nation added 287,000 net new jobs in June, led by job growth in leisure, healthcare, professional/business services, retail and finance. The information sector also added jobs as striking Verizon workers returned to work. Given the recent rise in oil prices, construction industry stakeholders may be speculating that some workers may have left the industry for the energy production sector,” said Basu 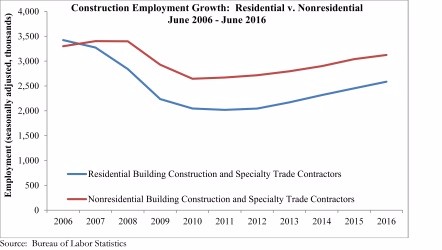 There are only days left until the election. The presidential election is important but so are all the elections. Take time to understand what the representatives you vote for stand for; believe in; support.

Our highways and infrastructure are crumbling; we need people in congress who understand the importance of updating, repairing, replacing and maintaining these resources.

In November VOTE, but vote intelligently.