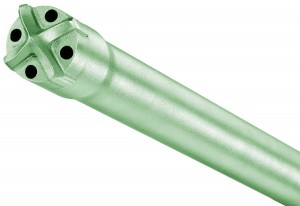 For holes that clean themselves use the new Hilti TE-CD and TE-YD Hollow Drill Bits in conjunction with the Hilti VC 20/40 vacuum.  The Hilti VC 20/40 Vacuum System removes dust while drilling is in progress for faster drilling and a virtually dustless working environment.  This new method of installation is only allowed with one adhesive in the market- Hilti HIT-HY 200.

No cleaning required -The new Hilti HIT-Z, zero cleaning rod with its cone shaped helix works as a torque-controlled anchor.  This means that because of their shape, HIT-Z Anchor Rods, when used with HIT-HY 200, the unique shape of the HIT-Z Anchor Rod allows it to be installed in a standard (hammer drilled, dry or water saturated concrete, above 41°F/5°C) uncleaned hole.  The benefits are clear:  Fewer steps and extremely high reliability in anchoring applications.

Available in two versions with the same load performance: HIT-HY 200-R for “regular” working times and HIT-HY 200-A for “accelerated” working times allows contractors to choose the perfect adhesive for the application and jobsite conditions.

Hilti HIT-HY 200 Adhesive Anchor System and Safe Set™ Technology is pending ICC-ES approval for use in all seismic zones and uncracked and cracked concrete.