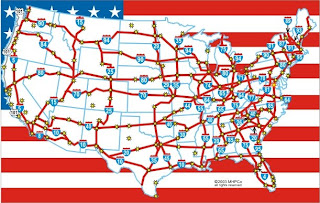 It must be difficult to imagine what life was like before the Interstate became an integral part of our culture. For people of my vintage, it isn’t that much of a challenge. I remember taking family trips from Detroit to Ft. Pierce, Florida and on down to St. Augustine; and from Detroit to Great Falls Montana. Other trips took us to equally strange and different places in Indiana, Ohio, Illinois, Pennsylvania, New York and the like. These trips were always tedious and stressful for everyone. Now, it’s easy to understand why my dad always grumbled when the topic came up for discussion in the early spring, as summer vacation drew near.

There were six of us then, Mom, Dad, an older brother and sister and a younger sister. I was the kid without status, you know the middle kid, the one who got stuck in the center back seat. This was the time before mini vans and SUV’s, even station wagons hadn’t caught on; it was the pre soccer-mom era.

Honestly, cars in the early 50’s left a lot to be desired since they had no air conditioning, only AM radios, if they even had a radio, and only uncomfortable bench seats.

The roads were narrow, winding, and hilly. In many areas, the roads were difficult to navigate because of unbanked curves and limited-sight inclines. Highway signage left a lot to be desired. You could tell which states were doing well by the condition of the roads and the number of directional signs posted. It was not uncommon to go for endless miles and not see a single sign, even a highway marker. Mile markers had not yet been created.

There were gas stations, roadside diners and an endless string of motels on the routes that carried a lot of tourist travel. The scenery was beautiful on most of these trips but when you’re a kid, how many miles of farmland, acres of woods or canyons can you stare at, especially from the center backseat, before boredom consumes you and you just have to let the endless cry of a weary road warrior fill the family car, “Are we there yet?” Thank God for Burma Shave and Mail Pouch Tobacco. Their signs provided the exciting travel entertainment. The dull stuff was counting cows or horses; counting the different makes of cars or keeping track of the “out-of-state” plates we passed.

On one trip to Florida I remember that my dad was really excited because we averaged a record-setting 35 miles an hour getting there… the trip was like 1,300 miles. Do the math, that’s a little over 37 hours; it was three days of extreme closeness. It was an eternity getting there, and once there, we were faced with the necessity of returning home.

Needless to say, the Interstate was wildly welcomed not only by my family but by all the other families who thought it was a necessary family function to pack the gang into the car and head out for a week or two of vacation. Travel time to Florida was virtually cut in half.

The Interstate didn’t carve its way across the country without leaving behind a lot of scars, not only on the landscape but also on the social/cultural demeanor of the country. In many instances it split cities in half or into sections, many times dividing ethnic neighborhoods creating chaos for the people who were displaced or forced to relocate.

There were hundreds of complaints by families because they were “kicked out” of their homes to make way for the Interstate and then these right-of-ways would be cleared and left waiting for some legislative issue to be settled or funding to be released.

As the Interstate made its way across the country all those roadside diners, gas stations and motels died a slow agonizing death. The Interstate closed their doors long before they were ready for this to happen. The Interstate impacted other sections of the economy with even more devastating results.

Freight transportation quickly migrated from railroads to trucking companies. The problem, this is where hindsight demonstrates that it is 20:20, was that railroads and trucking companies, by and large, became competitors. There were some efforts made at developing intermodal freight transfer systems, but they ended up being used for overseas shipments rather than domestic.

The Interstate Highway System became a catalyst for change. As the roads improved so did the cars – bigger, faster, and more comfortable… over time everything changed, leaving behind the pre-Interstate era.

During these passing 50 plus years since the creation of the Interstate System so many other technological advances have happened. I look at them and can see how better roads demanded better cars; better cars demanded improved manufacturing/production technology; this demanded improved engineering which in turn demanded more sophisticated computers and software. It’s all tied together and as the American Recovery and Reinvestment Act starts to move the economy forward, let’s learn from the past.

Integration is the key. We need an infrastructure that works together – highway, rail, marine and air – to help us develop and manufacture goods that we can take to market across the globe. Without an integrated, supporting infrastructure it simply won’t happen. We will no longer be global competitors. 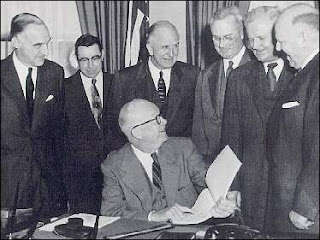 The Clay Committee presents its report with recommendations concerning the financing of a national interstate highway network to President Eisenhower on Jan. 11, 1955. Standing behind the president are (from left) Gen. Lucius Clay, Frank Turner, Steve Bechtel, Sloan Colt, William Roberts, and Dave Beck.

Construction of the IHS over a long period of time, Eisenhower and his economic advisers believed, would help stimulate the U.S. economy. At the same time, however, Eisenhower did not want a highway funding program that would place too great a financial burden on the federal budget.

In August 1954, Eisenhower asked former U.S. Army General Lucius D. Clay to head a committee that would recommend some way of financing an Interstate Highway System. In January 1955, Clay recommended issuance by the U.S. government of $25 billion in bonds that would be retired over 30 years with funds derived from the federal tax on gasoline and occasional borrowing from the U.S. Treasury. Bond sales to corporations, governments, and private individuals, Clay reasoned, would finance most of the costs of building the IHS without adding to the federal budget or the national debt.

Clay’s plan was attacked by leaders of farm groups who objected to his plan to freeze spending on local farm roads for a period of 30 years while the bonds were paid off. Equally important, the powerful Senator Harry F. Byrd of Virginia did not want the federal government to have to pay interest on such a large bond issue.

As an alternative to Clay’s ideas, Representative George H. Fallon of Maryland prepared legislation that would have paid directly for highway construction out of the U.S. federal budget. Fallon’s bill, however, required a vast increase in gasoline and tire taxes. In July 1955, nearly 500 truckers went to the nation’s capital to complain to senators and representatives about Fallon’s proposal for higher taxes. On July 27, members of the House of Representatives voted to reject both Clay’s proposals and the substitute offered by Fallon.

In 1956, Senator Albert Gore Sr., of Tennessee and Representative Hale Boggs of Louisiana joined with Representative Fallon to make yet another attempt to pass IHS legislation. The key to their success was in providing a little something for all interests: more spending for rural, urban, and interstate highways, but all this accomplished with only a small increase in gasoline and other automotive and truck taxes. As part of this arrangement, Congress and Eisenhower approved creation of the Highway Trust Fund, which would designate gasoline taxes (and excise taxes on tires and trucks) for exclusive use in financing construction of the IHS and other federal-aid roads. No longer would truck operators complain about gasoline taxes used for non-highway purposes.

Although construction on the Interstate Highway System actually continues today, I-70 through Glenwood Canyon, CO is often cited as the completion of the originally-planned system. Opened to traffic on October 14, 1992, the Glenwood Canyon project, a 12.5-mile-long network of viaducts, bridges, and tunnels constructed through an extraordinarily narrow, environmentally sensitive gorge in western Colorado, marked a milestone in the nation’s transportation history. The project not only connected the final leg of Interstate 70, but it also symbolized the completion of the original Interstate Highway System. 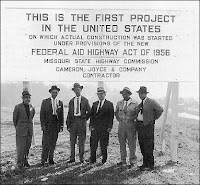 Missouri claims that the first three contracts under the new program were signed in Missouri on August 2, 1956. The first contract signed was for U.S. 66 (now I-44). On February 17, 2009, a Missouri crew was first once more. Within minutes of the American Recovery and Reinvestment Act of 2009 being signed, Missouri Department of Transportation had the first project ready and waiting. Before the ink could dry a crew started work replacing a bridge in central Missouri that was built in 1933 and was closed to large trucks in 2007 because of structural concerns.

There have been thousands of articles written about the construction of the Interstate. I, personally, did at least a dozen articles, including construction of the Eisenhower Tunnel in Colorado, stretches of highway through Chicago, Florida, California, Michigan, and virtually every state in the country.

In celebration of the Interstate’s 50th Anniversary in 2006, there were a number of industry projects covering its history, construction and social impact. The following are links to some of the more informative and interesting projects: American Associat
ion of State Highway and Transportation Officials (AASHTO), The Interstate 50th Anniversary Convoy , and the Federal Highway Administration’s 50th Anniversary Internet Site.

There have also been several books written on the Interstate System. In fact, Amazon has over 4,000 listings. Some of them are outstanding and make great reading. This is one infrastructure project that everyone should learn something about, since it has had such an impact on this country. Now 50 years later, aspects of it will once again be instrumental in transforming the country, this time from an economic crisis into sustainable growth. 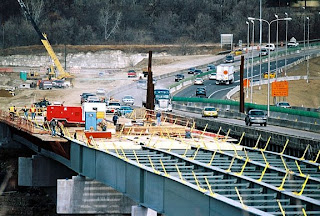 The Interstate program migrated from a dream to reality because we believed in its potential and became passionate about its promise. We need to embrace the American Recovery and Reinvestment Act with the same confidence and passion. This is an opportunity to fix and repair so many things that are broken. Let’s do it. It wasn’t long ago I heard people shouting in the streets, “Yes We Can!” It’s time for the world to hear us shout again, “Yes We Can!” because we have to…

Hats off to all of the IRWA Top Ten Infrastructure Projects, and a special salute to number 1, the Interstate Highway System.

Note: Although the videos sound like they were recorded today, because they so clearly state our problems and the crises we face, they were actually filmed in 1954. Obviously, some things never seem to change…