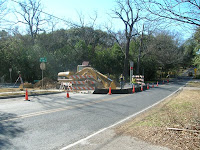 And number 8 on the IRWA Top Ten Infrastructure Projects list is the Austin Clean Water Program. Unlike most of projects that made this list, the Austin Clean Water Program isn’t easily identified by a graceful span of structural steel that connects two sides of a bay, or an expanse of interwoven highways, bridges, over passes and ramps. It’s a program designed to eliminate a problem and improve the quality of life in the area surrounding Austin, Texas.

The City of Austin received an A.O. from the U.S. EPA on April 29, 1999. The Administrative Order required that the City of Austin perform a series of activities designed to result in an improved wastewater collection system free from SSO’s. These activities included Infiltration/Inflow Studies (I/I), Sanitary Sewer Evaluation Surveys (SSES), as well as subsequent design and construction of necessary improvements to the wastewater collection system.

The combined staffs of city personnel and support consultants, who are dedicated to this program, are called the Austin Clean Water Program Team (ACWPT). ACWPT provides management support and coordination for the planning, design and construction of sustainable wastewater collection facilities necessary to meet the A.O. requirements.

The most impressive component of this project is the fact that this is no short-term “let’s get it over and done with” passing project. This has become a change in lifestyle and attitude and a permanent commitment to the preservation of an environmental system.

The Austin Water Utility and the Watershed Protection & Development Review Department are collaborating to protect sewer lines in the creeks and clean up and restore at least two important Austin creeks through the Austin Clean Water Program (ACWP).

In the past, sewer lines were often placed in creek beds because gravity carries the wastewater flow to treatment plants. ACWP offered the City an opportunity to examine these existing lines in targeted areas to see how feasible it was to choose new alignments outside the creek beds. As a result, the Austin Water Utility removed lines from creeks when it was feasible and responsible, as well as rehabilitated existing lines where they remained.

Members of the Stream Team walked each stream segment and made recommendations for line placement, stream stability and environmental protection. Team members developed design standards that emphasized the use of native materials (limestone rocks, native plants) for stream stabiliz 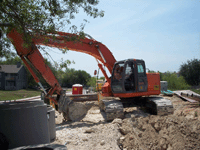 Of the 29 projects identified in north Austin’s Crosstown Tunnel Basin, 14 relocated sewer lines entirely or partially outside of stream channels. Of those 14, nine were located entirely within streets. Where work was done in the creek, the channel was stabilized and restored to WPDRD standards.

In northeast Austin, on the Tannehill Branch of Boggy Creek in Bartholomew Park, wastewater lines and manholes were upgraded to reduce the likelihood of sewage overflows into the creek. In West Austin, exposed lines were removed and natural techniques restored Shoal Creek at Pease Park as two new lines were built, one under Lamar Boulevard and one under the hike and bike trail.

The project was much more than cleaning up streams and creeks. It became a total involvement of managing and disposing of a city’s waste materials in an environmentally friendly way.

To help with the project The City of Austin Water Utility created a citizens advisory group. Neighborhood, environmental and business leaders were named to the ACWP Advisory Group. Members served as an important public link to the project team, representing the views of other residents and neighborhoods, stakeholders, customers and Austin’s Water Utility.

The ACWP Utility commended the members of the advisory group who volunteered their time to serve on the Austin Clean Water Program Citizens Advisory Group.

The city, the utility and the citizens all worked together to make the project successful. In the process they all learned and are becoming better stewards of their environment.

They posted a very interesting, interactive diagram on their website that helps explain the reasoning behind correcting the problem in such an environmentally friendly way.

It’s easy to understand the reasoning behind making this one of the winners of the Top Ten Infrastructure Projects. It does deserve the recognition.

• Contractor Assistance Program (CAP): concluded the bidding process with a $12,521,997 savings between CAP contractor low bid and the next low bid while maximizing both competition in bidding and minority, women and small business participation in the construction effort

• Secure Federal Grant Funding: STAG Grant funding secured for the City for a total of $3.5 million
• Value Engineering: Evaluation of projects designs considering new investigative and rehab
techniques identified a $2.5 million savings in original planned designs
• Minimized Change Orders: Change orders have lowered over the past 6 months to 3.7% on all awarded projects and 4.1% on completed projects

ACWP SUCCESSES / BENEFITS
• A reduction in overflow quantity: from more than 13 million gallons per year before the program begin to less than 285,000 gallons though the end of August, 2008.

A decrease in peak flows

Tomorrow we will travel from Austin to Phoenix and visit the Number 7 project on the list, City of Phoenix Light Rail System. It is interesting to note that all of these projects blend into the stimulus bill and the needed infrastructure improvements.