The 7th place winner of IRWA’s Top Ten Infrastructure Projects was named by the group as City of Phoenix Light Rail System. It’s actual name is Valley Metro Rail Inc., and is called METRO by the people who live in and around Phoenix. The light rail system serves the cities of Phoenix, Tempe, Mesa, Glendale, Chandler, Peoria, Scottsdale and Sky Harbor International Airport.

METRO is a 20-mile light rail system that was officially opened for business in December 2008 at a cost of $1.4 billion. The METRO authority has plans to add an additional 37 miles to the system before the project is completed by 2025.

For January 2009, METRO ridership totals 911,883 boardings, resulting in an average weekday ridership of 30,617, average Saturday ridership of 31,331 and average Sunday and holiday ridership of 23,815. “We are delighted with the community’s response to the system and their turn out. We hope to see this success continue with more and more people integrating light rail into their transportation plans,” said Councilman Tom Simplot, METRO’s board chairman. During the extensive planning for METRO, an average weekday ridership of 26,000 daily boardings was projected for its first year of operation. METRO will continue to monitor ridership and report new totals each month. “The METRO team is hard at work to provide a high level of service that keeps customers coming back to light rail,” said METRO CEO Rick Simonetta. “We are extremely pleased with these preliminary numbers and hope to see them continue to exceed our projections over the course of this first year.”

The METRO project has had to fight some pessimistic press. There are some who believe that the project is doomed and that it can’t be successful based on its own projections. Others believe that it’s a boondoggle.

I’m not in a position to agree or disagree with these or similar comments. Time will tell if the project is a success or a failure; if it helps solve transportation and pollution problems in the greater Phoenix metropolitan area. I can say that I have been stuck in the traffic and it was as dense, congested and bad as any I have had the pleasure of experiencing. My experiences include Detroit, New York City, Los Angeles, Houston, Phoenix, Philadelphia, Atlanta, Paris, London, Madrid, Rome and a few others. All these traffic-congested areas have one thing in common – they are bad, bad, bad!

I’d like to add another comment about the METRO and the City of Phoenix. A number of years ago I had to attend a meeting in Carefree, AZ. I flew into Sky Harbor, picked up a rental car and “care-freely” drove to Carefree. On the way there I had to make a stop. As I got out of the car and looked around I noticed a gigantic mustard-colored dome sitting off in the distance.

“What is that?” I asked another motorist standing nearby.

“That’s Phoenix,” he said looking at me like I was from another planet to not have known this.

“Yes, I heard on the news that the SMOG index was up to…” he commented including the missing totally meaningless SMOG index number.

Since then, Phoenix has done a commendable job of changing the color of that “mustard-colored mushroom cloud” to a nearly transparent one. The point is that a mass transit system could help relieve some of the traffic congestion and the pollution. You have no idea how difficult it is for me to say this because I am originally from Detroit and am a strong believer in private transportation – Car is King.

Back to the 7th place winner… METRO is the brand name for Valley Metro Rail Inc., a nonprofit, public corporation charged with the design, construction and operation of the Valley’s light rail system. The seven cities that participate in the light rail system each have a representative on the METRO Board of Directors.

The METRO Board establishes policies, receives and disburses funds and grants, has the power to enter into contracts, to hire or contract for staff, and to undertake extensions to the system.

Generally, the METRO board members are the mayors of the participating cities, each with three alternates. Board members have weighted voting to ensure that cities investing more in light rail have a corresponding level of authority; however, no city has more than 50 percent of the vote. Weighted voting is recalculated.

The Greater Phoenix area has long been criticized for being one of the largest metropolitan areas in the country that had only bus service for public transportation. Over the past 20 years many highways have been added, widened and improved, encouraging more cars, more traffic, and more problems with pollution and ozone layer destruction.

The history of the light rail project goes back to 1985, when voters in Maricopa County approved an increase in taxes to fund seed money for the project and the creation of the Regional Public Transportation Authority. We know that entity today as Valley Metro.

Factoid:
METRO light rail vehicles are manufactured by Kinkisharyo International in Japan. More than 50 percent of the parts on the vehicles are American made. Final assembly of the vehicles occurs in Arizona. 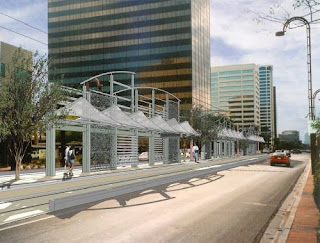 The METRO light rail stations have platforms that are 16 feet wide by 300 feet long for passengers boarding or exiting trains in either direction. Stations are located in the center of the street, and passengers use lighted intersections and crosswalks to access the trains.

The station entry area has ticket vending machines. Stations have plenty of shaded areas, seating, route maps, timetables, drinking fountains, public telephones, garbage containers and landscaping. They are well lit. Stations are designed for accessibility in compliance with the Americans with Disabilities Act (ADA). Artwork is also integrated into the design of all the stations.

The 20-mile METRO starter line opened for passenger service in December 2008. During peak times, a train stops at a station every ten minutes. At night and on weekends, trains stop every 20 to 30 minutes. Trains run between 18 and 20 hours per day. Rail fares are the same fare as the local bus fare.

Here are some basic facts about the METRO light rail system implemented in the Phoenix area.

Six future extensions (37 additional miles) to other parts of Phoenix, Tempe and Mesa, and to downtown Glendale, are included in the Regional Transportation Plan.

The METRO system is expected to reduce airborne emissions (pollution) by more than 12 tons each day compared to emissions associated with the same amount of passengers in cars.

I, personally, question the selection of this as the 7th place winner but willingly bow to the wisdom of others who certainly know more than I do and it is probably the single most serious approach to mass transportation in the last 75 years. One good thing about the METRO, if you happen to be a baseball fan, you can visit a large number of MLB spring raining camps by riding the METRO light rail system.

Tomorrow we head north, cross the border into Canada and take a ride across Confederation Bridge, the sixth place winner on IRWA’s list of Top Ten Infrastructures.