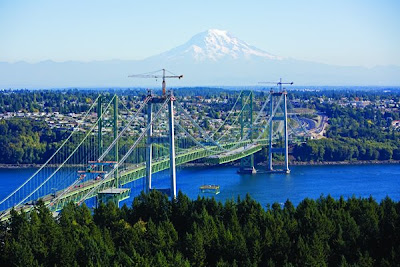 The Tacoma Narrows Bridge is a pair of mile-long suspension bridges in Washington State, which carry State Route 16 across the Tacoma Narrows between Tacoma and the Kitsap Peninsula. They replaced a single bridge that opened to traffic on July 1, 1940 and became famous four months later for a dramatic wind-induced structural collapse that was caught on tape. The original span’s motion earned it the nickname “Galloping Gertie.”

Due to materials shortages as a result of World War II, it took 10 years to build a replacement bridge, which opened October 14, 1950. The 1950 replacement bridge was sometimes referred to as “Sturdy Gertie,” and, like its predecessor, was the third longest suspension span in the world at the time of its construction. Population growth on the Kitsap Peninsula caused the bridge to exceed its vehicle capacity, and a parallel bridge was constructed to carry eastbound traffic, while the 1950 bridge was reconfigured to carry westbound traffic. The new bridge opened July 15, 2007, making the Tacoma Narrows Bridge the longest twin suspension span in the world.

The desire for the construction of this bridge dates back to 1889 with a Northern Pacific Railway proposal for a trestle, but concerted efforts began in the mid-1920s. In 1937, the Washington State legislature created the Washington State Toll Bridge Authority and appropriated $5,000 to study the request by Tacoma and Pierce Counties for a bridge over the Narrows.

The first Tacoma Narrows Bridge collapsed at 11:00 AM (Pacific time) on November 7, 1940 due to a physical phenomenon known as aeroelastic flutter caused by a 42 mph wind. The bridge collapse had lasting effects on science and engineering. In many undergraduate physics texts the event is presented as an example of elementary forced resonance with the wind providing an external periodic frequency that matched the natural structural frequency (even though the real cause of the bridge’s failure was aeroelastic flutter). Its failure also boosted research in the field of bridge aerodynamics/aeroelastics which has influenced the designs of all the world’s great long-span bridges built since 1940.

Unlike the collapse of Bridge 9340 in Minneapolis, MN on August 1, 2008, no human life was lost. The collapse of the original Tacoma Narrows Bridge was recorded on film by Barney Elliott, owner of a local camera shop, and shows Leonard Coatsworth leaving the bridge after exiting his car. There are numerous other films that show the dramatic and horrifying gyrations of “Galloping Gertie” as this almost new bridge shook itself to pieces.

In 1998, The Tacoma Narrows Bridge collapse was selected for preservation in the United States National Film Registry by the Library of Congress as being “culturally, historically, or aesthetically significant.” This footage is still shown to engineering, architecture, and physics students as a cautionary tale.

After the collapse, two bridges were constructed in the same general location. The first one, now called the Tacoma Westbound bridge, is 5,979 feet long — 40 feet longer than “Galloping Gertie.” The second one, the Tacoma Eastbound Bridge, opened in 2007.

Westbound Bridge
The current westbound bridge was designed and rebuilt with open trusses, stiffening struts and openings in the roadway to let wind through. It opened on October 14, 1950, and is 5,979 feet long — 40 feet (12 m) longer than the first bridge, “Galloping Gertie.” Local residents nicknamed the new bridge “Sturdy Gertie,” as the oscillations that plagued the previous design had been eliminated. This bridge, along with its new parallel eastbound bridge, are currently the fifth-longest suspension bridges in the United States.

The bridge was designed to handle 60,000 vehicles a day. It carried both westbound and eastbound traffic until the eastbound bridge opened on July 15, 2007.

Eastbound Bridge (Second Tacoma Narrows Bridge)
In 1998, voters in several Washington counties approved an advisory measure to create a second Narrows span. The new bridge is one of the first major suspension 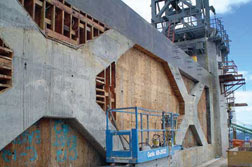 bridges in North America to be constructed under a design/build contract, and it carried a fixed price and firm delivery date. Its two 155 m tall reinforced-concrete towers are founded on massive reinforced-concrete gravity caissons constructed by open dredging. Gravity anchorages on the hillsides serve to secure the suspension cables. The suspended superstructure consists of 7.2 meters deep and 1,646 meters long continuously welded steel trusses with an integral orthotropic steel deck. The design is such that a future roadway or light-rail system on a deck beneath the main deck can be accommodated. Construction of the new span, which carries eastbound traffic parallel t

To reduce costs, maintain the schedule, and impart aesthetic appeal, the construction team decided that the bridge towers would be of high-strength concrete with steel and post tensioned reinforcement. According to the American Society of Civil Engineers (ASCE), this is only the second time that a major suspension bridge anywhere in the world has used reinforced-concrete towers in a zone of high seismic activity, the first being the newest bridge over California’s Carquinez Strait, which opened in 2003.

Only a handful of side-by-side suspension bridges exist in the world, and none are as large as the parallel Tacoma Narrows bridges. Nor are the members of the other pairs in such close proximity as they are here, only 55 meters center to center. For this reason, as well as for the obvious reasons relating to the original bridge’s collapse, rigorous wind tunnel testing of both the 1950 westbound and the 2007 eastbound bridge was conducted by RWDI, a wind engineering and environmental consulting firm based in Guelph, Ontario, to evaluate bridge stability and the dynamic wind interaction between the structures. Because of the complexity of the problem, side-by-side full-bridge aeroelastic models, each 7.22 meters in length, were constructed using state-of-the-art laser cutting and stereo lithography techniques to capture every detail
for the 1:211 scale models. For the first time ever, two complete side-by-side suspension bridge models were tested. This unique test provided the needed assurance that the two bridges would not suffer from any wind instability or adverse interference effects and that a safe and economical design could be released for construction.

The ground motions were based on a probabilistic seismic hazard analysis that included seismogenic sources from the Cascadia Subduction Zone, shallow crustal sources, and the subcrustal intraplate zone within the subducted Juan de Fuca Plate lying beneath the region. For the SEE, it was determined that the bridge could suffer primarily “minimal damage” with some “repairable damage” to its secondary structural components and limited permanent displacement or drift of the bridge. The bridge performance requirement in the case of the FEE called for no damage, requiring essentially an elastic performance of the bridge structure.

The Second Tacoma Narrows Bridge is exceptional in that it was designed for a service life of 150 years.

The congestion that was plaguing the existing bridge has been eliminated by the opening of the new crossing, a toll bridge using electronic toll tags. The public has been enthusiastic about the resulting time savings in their daily commutes. The Washington State Department of Transportation (WSDOT) considers the project successful from a variety of perspectives, among them that it closely adhered to its schedule, met exacting construction standards, and was completed for less money than was budgeted. Of particular importance to the facility users was the lower cost and its effect on tolls. At the start of the project, the combined WSDOT and Tacoma Narrows Constructors (TNC), a joint venture between Associated General Contractors (AGC) of Washington member firm Kiewit Pacific, Vancouver, WA and Bechtel Infrastructure, San Francisco, CA, overall construction budget for the new bridge plus main-line and interchange construction and existing bridge upgrades was put at $760 million. Once the upgrading work on the existing bridge is completed and turned over to the WSDOT, it is projected that the overall project construction cost will be $722 million, a savings to the public of $38 million. Second only to an impeccable safety record, the project cost savings represent one of the greatest outcomes of the project’s approach, which was captured in its motto: “One project—one team.”

Towers
• Concrete towers 510 feet high (8,000 cubic yards of concrete each)
• Towers and caissons designed for second deck (either road or light rail) to be added in the future

Suspension System
• Main cables 21 inches in diameter made of 5,500 tons of wire

The Second Tacoma Narrows Bridge earned its 5th place spot on the International Right of Way’s Top Ten Infrastructure Projects list because of its contributions to the quality of life in the Washington State area and improvements to the environment through the elimination of traffic congestion. It is not only beautiful, but it is also a modern wonder and a tribute to architectural design, engineering excellence and construction quality.

Tomorrow we push further north and travel along one of the most incredible engineering and construction projects of all time, the Trans-Alaskan Pipeline. I have a few interesting, personal stories to add to that journey.