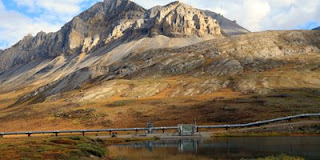 In January of 1976, I talked the owner of the magazine I was with into sending me on assignment to cover the construction of the Trans Alaska Pipeline System (TAPS). Thirty plus years later, it still stands out as one of the most memorable trips in my life and one of the best series of articles I have ever done.

Arranging the trip was difficult. I needed clearance from Alyeska Pipeline Service Company and stories scheduled in advance. With the help of Caterpillar and a couple of its dealers, Fabick CAT out of St. Louis, MO and N.C. Machinery out of Washington State, I was able to schedule story interviews.

After arriving in Anchorage and picking up a rental car, I checked into a Holiday Inn that was to be my home for the next two weeks. I started confirming all my appointments and got ready for my orientation session with Alyeska.

During the session, safety was stressed and the list of rules covering non-working visitors was repeated endlessly. Thirty years later, the three things I remember most from the session are: 1) Don’t eat yellow snow. 2) Don’t kiss any metal objects while outside. 3) Don’t ever take your gloves or mittens off and grab anything metal. 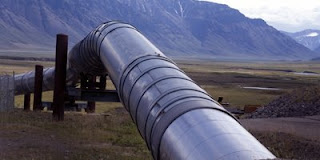 Each day, Alyeska chauffeured me to various points along the pipeline, starting at the Prudhoe Bay Camp on the North Slope, until we worked our way down to Valdez. A couple of memorable stops along the way included the Lowe River crossing and travel through Vail Pass. We would meet at a private airfield and board a four or six passenger single engine airplane that flew us to our destination. Our flights usually took off around 5 am and returned around 5 pm.

Sometimes it was just the pilot, the guide and me, and other times we would share the roomy space with other passengers who were going to the same camp. On the first trip out I had the pleasure of traveling with the wife of the president of a very powerful environmental group. There were a number of environmental issues that challenged the construction of the pipeline, one being the caribou. It was argued that the caribou migrating patterns would be disturbed because of the pipeline crossing their trek. Another vocalized complaint was that the pipeline would destroy the native natural beauty of the terrain.

Anyway, to make this long story a little shorter, the woman we were traveling with on this particular day kept talking about these two issues. Her purpose for the trip was to gather evidence that would prove that both these and other issues needed to be addressed. We were flying along looking out the window at the endless stark white expanse that stretched below us. We were traveling parallel to the pipeline and had the good fortune to spot a couple of caribou herds. Naturally, we had to point them out to our guest. They didn’t seem disturbed at all by either the pipeline or the deafening roar of our single engine plane.

At one point the woman said, “Don’t you think it would be absolutely horrible to put a pipeline across this beautiful terrain and destroy that beauty?

I smiled and almost burst out laughing when the guide said, very politely, “Ma’am, there is a pipeline down there, we’ve been flying along side it for the last thirty minutes.”

I hate to admit it, but it was enjoyable watching a crimson glow cover her face. The rest of that trip was uneventful and I was able to gather facts and information for my articles.

It was incredibly cold the entire time I was there. In 1976, digital cameras didn’t exist, so I was shooting my pictures with a 35 mm Canon and a Bronica two-and-a-quarter square format camera. I shot slide film or transparencies. It was a tough job because the temperatures were so low the film wouldn’t advance until it was warmed enough to be flexible. At times the temperatures were 30 below zero or lower.

Building the pipeline across frozen Alaska was challenging in itself, but the contractors had the added responsibility of protecting the environment. This project was one of the first that was so environmentally and ecologically sensitive. Equipment had to operate using “belly pans” so that none of the fluids would drip onto the ground. There are sections of pipeline that were placed underground in the frozen tundra that have to be refrigerated to keep the heat generated by the flowing oil from defrosting the soil.

Some sections of the pipeline were laid in terrain that was only accessible by helicopter, so first the equipment had to be airlifted into place, then the personnel and finally the pipe. You can imagine how difficult it was to airlift a D-9 dozer or a large wheel loader to a remote site running along the ridge of a mountain range. Everything about this project was challenging.

The people who designed, engineered and built the Trans Alaska Pipeline encountered and handled every conceivable obstacle you can imagine. It is a real tribute to this industry to have dreamed it and to have built it.

The consortium of companies that own TAPS today includes:

Built in the 1970’s after oil was discovered at Prudhoe Bay (1968), the 48-inch diameter, 800-mile pipeline links Prudhoe Bay on the Arctic Ocean with the terminal at
Valdez, the northernmost ice-free port in the Western Hemisphere. This is one of the largest pipeline systems in the world and the only way to get crude oil from Alaska’s North Slope fields to tankers waiting in Valdez. The flow from this pipeline accounts for roughly 20 percent of U.S. oil production annually.

Alyeska Pipeline Service Co., which operates and maintains the pipeline, gives tours from early May through mid-September at the Fox Visitor Center, eight miles north of Fairbanks on the Steese Highway. Tours and presentations by their employee’s club are free of charge and are offered from 8 a.m. until 6 p.m. Monday through Saturday. Pump Station 9 on the Richardson Highway also offers tours.

Day trips by van or by air to Prudhoe Bay are available from Fairbanks, or you can drive the rugged Dalton Highway 487 miles to Deadhorse at Prudhoe Bay. The pipeline parallels the Dalton Highway, but access to the Prudhoe Bay oilfield complex is available only through commercial tour operators.

The pipeline is buried for less than half its length, where the ground is well-drained gravel or solid rock, and thawing is no problem. Wherever the warm oil would cause thawing of the icy soil (which would cause sinking or heaving) the pipeline, which cost about $8 billion to build, sits on top of 78,000 above ground supports spaced 60 feet apart. The sections above ground are insulated and covered. The pipe is raised high off the ground in places to span rivers or to allow wildlife to cross under the pipe.

There were originally twelve pump stations and many valves controlling the flow of oil. Currently, two pump stations are not operating, and two are on idle status, leaving pumps 1, 3, 4, 5, 7, 9, 11, and 12 operating. The entire system is operated from the Operations Control Center located in Valdez, but can also be operated independently at each pump station.

The 48-inch diameter pipe is made of specially coated material covered with zinc anodes to ward off corrosion. More than 800 crossings of rivers and streams are made between Prudhoe Bay and Valdez.

Alyeska built the 360-mile haul road, now known as the Dalton Highway, from the Yukon River to Prudhoe Bay, for $150 million to supply the oil facilities on the North Slope. The pipeline bridge across the Yukon River is the only span across that river in Alaska.

The Joint Pipeline Office was organized in 1990 in answer to concerns about corrosion of the pipe and potential spills. The office is composed of nine state and federal management agencies that issue permits and monitor operation of the pipeline to encourage environmental safety.

Alyeska Pipeline Service Company is responsible for the design, construction, operation and maintenance of the pipeline. The company employs more than 2,000 people in Alaska, including Alyeska workers and sub-contractors. In 1997, Alyeska’s main offices split into three business units, one of which is located in South Fairbanks. About 300 employees moved to Fairbanks from Anchorage as Alyeska made a move to position more of its workers closer to the pipeline.

Alaska is certainly one of the most beautiful places I have ever visited, and the Trans Alaska Pipeline is the most significant construction project I have ever covered. It’s easy for me to see how it was picked as number 4 on the list of the IRWA Top Ten Infrastructure Projects. If I had been voting I would probably have voted it number 1 or number 2. To me, it stands as a symbol of great achievement. To have built this across the most hostile environment on earth is a real tribute to the industry.

Tomorrow, we leave frozen tundra and head for Hoover Dam, the number 3 selection on the list of IRWA’s projects.