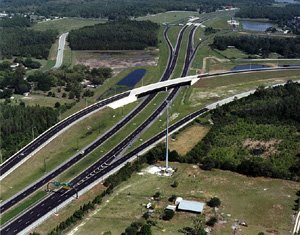 The Suncoast Parkway that takes tourists and locals across 42 miles of the State of Florida provides a real service not only to the people who use the toll road but also to the wildlife that lives alongside it. This stretch of highway has earned the distinction of being number 2 on the International Right of Way Association’s Top Ten Infrastructure Projects list.

The Suncoast Parkway is the most recent link in the more than 400 miles of toll roads within the Florida Turnpike system. Connecting with the Veterans Expressway in northwest Hillsborough County, the Suncoast Parkway links Hillsborough with Pasco and Hernando counties, providing both a valuable link in Florida’s Intrastate Highway System and an alternative north-south route through Florida’s west coast. The Suncoast Parkway, like other Florida Turnpike roads, is a user-financed facility, paid for through the combination of revenue bonds and revenues collected on the entire Turnpike system. Tolls collected throughout the system pay for operation and maintenance costs, and for bond debt.

The Suncoast Parkway from S.R. 50 to U.S. 98, near the Hernando/Citrus County Line, opened to traffic on August 11, 2001. The traveling public now has an opportunity to use a scenic, environmentally friendly, limited-access facility from Tampa International Airport through Hillsborough, Pasco, and Hernando Counties.

The 42-mile mainline stretch of the Suncoast Parkway Project, including many of the local service roads and the recreational trail is complete. More than 400,000 tons of asphalt has been used to complete paving of the entire project. The asphalt placed on the Suncoast Parkway, “superpave” (SUperior PERforming Asphalt PAVEments), is different from the asphalt historically placed on roadways in Florida. It is a relatively new process to the United States, but is widely used in Europe. 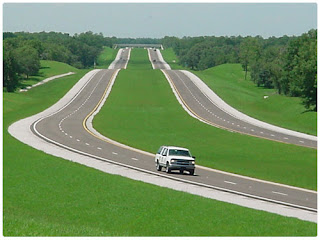 This process provides an exceptionally durable pavement, highly resistant to heavy truck traffic and wheel rutting. At the time this project was under construction, Florida was one of six states using superpave for state roadway projects. Currently, there are only 14 states that have not yet embraced the new technology. I wouldn’t be surprised if superpave was one of the requirements to get stimulus plan funding.

The Suncoast Parkway Project was the second expansion project by Florida’s Turnpike using this new process. The first was the Polk Parkway, which was completed in early 2000. The traveling public may not visually notice any difference in superpave, but they will see the benefits in the pavement’s ability to withstand the ever-growing need for a quality roadway capable of handling large volumes of private and commercial vehicles. This is just one of the ways that Florida’s Turnpike is paving the way for a safe and pleasurable commute for its patrons.

Bridge building was a major component of the construction process on all six sections of the Suncoast Parkway Project. Whether the bridges were made from concrete or steel; whether they were placed over existing roadways, streams, wetlands or rivers, bridges are more complex and require more planning and preparation than is realized by the casual observer.

On March 29, 1999, eight bridge beams were set for the Suncoast Parkway to bridge over State Road 50 (Cortez Boulevard) in Hernando County. Many months earlier the bridge subcontractor built the foundation by driving pilings to firm earth or rock. Then the road-building contractor put in the embankment and earth retaining walls. When that was nearly complete, the bridge subcontractor came back to construct the concrete supports (“bent caps”) for the bridge superstructure.

For the State Road 50 Bridge, steel girders were fabricated and assembled at Tampa Steel Company. Each beam was approximately 170 feet long and weighed approximately 30 tons. The girders were shipped in pairs, for stability, to the jobsite on March 22nd and March 23rd for placement by the bridge contractor. Motorists, residents, and emergency services were given advance notice of the beam’s placement. Variable message boards, press releases, and articles in local newspapers helped to alert all concerned of the intermittent lane closures that would be necessary between 9 pm and 2 am. Local law enforcement officers directed traffic throughout the evening.

The Veterans Expressway is the southern 15-mile portion of Toll Road 589, extending from near SR 60/Courtney Campbell Causeway west of Tampa International Airport to SR 597/Dale Mabry Highway in Hillsborough County. The project’s design, right-of-way acquisition and construction originated with the Tampa-Hillsborough County Expressway Authority. In 1990, the Florida Legislature established the Florida’s Turnpike expansion program and identified this road as one of the Turnpike expansion projects. The Veterans Expressway was officially named when the Florida Legislature passed CH.92-152 in 1992. The legislation dedicated the project to the veterans of all wars. Construction was completed on October 1, 1994 and the Turnpike assumed ownership and operating responsibility.

The Suncoast Parkway’s electronic toll collection system, SunPass, uses small, pocket-sized transponders that attach on the inside of vehicle windshields. Communication between the transponders and plazas takes place as vehicles proceed through SunPass lanes. Account balances are updated as tolls are deducted from the customers’ prepaid account and are displayed on the transponders instantaneously.

The Suncoast Parkway Project I is the 42-mile portion of Toll Road 589, connecting with the Veterans Expressway in northwest Hillsborough County, extending through Pasco County, and terminating in northern Hernando County at US 98, near the Hernando-Citrus County line.

By working closely with South West Florida Water Management District (SMFWMD), the U.S. Army Corps of Engineers and other agencies in the planning and mitigating process, the Turnpike District designed the roadway to blend into the existing environment and reduce the environmental impacts for such a huge project.

Construction of the $507 million Suncoast Parkway began in the summer of 1998. The project opened to traffic in two phases. On February 4, 2001, the section extending from Veterans Expressway to SR 50 in Hernando County opened, and the final section from SR 50 to US 98 opened in August 2001. Interchanges are located at Van Dyke Road, SR 54, SR 52, Pasco/Hernando County Line Road, Spring Hill Drive, SR 50 and the terminus at US 98. 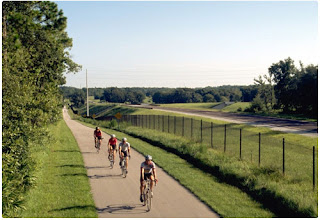 nstructed simultaneously with the roadway as part of the statewide bicycle trail system. It provides an alternative route for safe bicycle and pedestrian commuting for local residents and also serves as a regional recreational facility for residents of the region and visitors from throughout Florida. The 29-mile paved recreational trail paralleling the Suncoast Parkway from Lutz-Lake Fern Road in Hillsborough County to S.R. 50 in Hernando County, is twelve feet wide and runs along the west side of the Parkway. The 400-foot right-of-way for the Suncoast Parkway assures that there is ample space to separate the trail from the roadway with fencing and vegetation buffers.

In cooperation with Hillsborough, Pasco and Hernando counties, the Suncoast Trail has been designated as a “Millennium Trail” by the White House Millennium Council, a National Recreation Trail by the Department of the Interior’s National Park Service, and part of Florida’s Greenways and Trails System. The trail is owned by the Florida Department of Transportation (FDOT) and is operated and 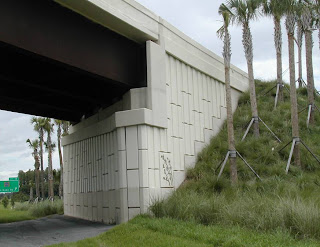 maintained by the Hillsborough, Pasco and Hernando counties’ Parks and Recreation Departments.

The Florida Suncoast Parkway Project deserves the recognition it has been awarded by being listed as number 2 on the IRWA Top Ten Infrastructure Projects list. Florida responded to the needs of its citizens, both the year-round residents and the “snowbirds” by adding this 42-mile section of road. The FDOT wisely made it a toll road and again wisely used the latest in technology to build it – superpave.

The roadway not only addresses the needs of the motorists who travel it, but also takes into consideration the wildlife that lives along its path and the environment through which it travels. This is an outstanding example of how needs and wants can be balanced and combined, resulting in not only a workable solution but also an award winning one.

Tomorrow, we take a look at number one on the list, The Interstate Highway System. It’s obvious how this made the top of the list. It has probably had a greater impact on the “American Way” than any single thing other than mass production. The Interstate System forever changed the face of the landscape and the heart of America.