According to the letter, high-speed rail would reduce traffic and airway congestion and pollution, in addition to the country’s dependence on foreign oil. They specifically noted Chicago’s bid to host the 2016 Olympics and suggested improved rail transportation could help the city’s chances.

“President Obama’s vision of making high-speed rail a part of our nation’s future transportation network holds great promise,” Gov. Doyle and co-signers wrote. “We recognize that a high-speed rail network has the potential to reduce highway and airway congestion, greenhouse gas emissions and the nation’s dependence on foreign oil.”

The joint letter, dated April 10, stressed how that and other projects fit together as part of the Midwestern Regional Rail Initiative (MWRRI), a cooperative effort between Amtrak, the Federal Railroad Administration (FRA) and nine Midwest states (Illinois, Indiana, Iowa, Michigan, Minnesota, Missouri, Nebraska, Ohio, and Wisconsin) to develop an improved and expanded passenger rail system in the Midwest that has been under way for a decade.

This vision has been transformed into a transportation plan-known as the Midwest Regional Rail System (MWRRS). The primary purpose of the MWRRS is to meet future regional travel needs through significant improvements to the level and quality of regional passenger rail service. The rail service and its stations will also provide a stimulus for joint development. Senior officials from the nine Midwest states and Amtrak have tested, refined and confirmed that it is indeed feasible to implement and operate this 21st century regional passenger rail system.

The major elements of the nine-state passenger rail initiative specified in the letter include:

“• 3,000 miles of existing rights of way to connect rural, small urban and major metropolitan areas. The states will work with freight railroads to assess where capacity is needed to provide reliable 110-mph service.
“• Operation of a hub-and-spoke passenger rail system that provides service to and through Chicago to locations across the Midwest. All corridors provide service to city-to-city pairs within 500 miles of each other.
“• Modern train equipment that operates initially at 110 mph. Current passenger rail equipment is outdated and designed for a 20th century train network, not a 21st century network. Next generation train equipment will travel at faster speeds with better acceleration and deceleration, will provide increased comfort and amenities for riders, and will provide travelers with more options than air or auto modes.
“• Multi-modal connections that will improve the entire transportation system network. The states engaged in the MWRRI understand the importance of intermodalism. The passenger rail network and feeder system will connect riders to their communities, airports, bus stations and highways.
“• Focus on reliability and on-time performance. We know that ridership depends on trains that arrive and depart on time. We are familiar with the predictable by-the-minute train service that exists in Europe and Asia. The MWRRI Plan recommends track and signal improvements to achieve the same level of on-time performance. That is the MWRRI vision.”

The governors are seeking funding for the projects through the American Recovery and Reinvestment Act (ARRA), which specifically mandates funding for improving and deploying high-speed rail systems in the United States. The letter presents the case that the MWRRI has done the needed studies and preliminary work for projects that would provide increased mobility for travelers and promote regional and economic development goals.

“I believe Missouri and the other states in our region present a compelling and united case to the Obama Administration to fund these projects,” Gov. Nixon said. “Our states have been working on this rail initiative for more than a decade, and we will aggressively compete for these Recovery Act funds specifically designated for high-speed rail projects.”

The Midwestern network would include 3,000 miles of existing rights of way to connect cities with trains capable of at least 110 mph. Chicago, which is bidding to host the 2016 Olympic Games, would serve as the hub, just as it does for freight. The rail network would link large and small metropolitan areas, airports, bus stations and highways. 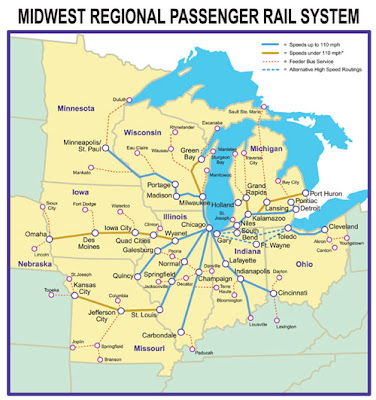 The Milwaukee-to-Madison route would be the first segment of a larger high-speed route from Chicago to the Twin Cities. That’s part of $3.4 billion that the officials are requesting for three routes, including Chicago-to-St. Louis and Chicago-to-Detroit lines. The letter states that with ARRA funds, projects in these corridors can be completed between 2012 and 2014.

They also requested $130 million for preliminary work on other segments of the Chicago-to-Twin Cities route and other routes, including completion of corridors that extend from Chicago to the Twin Cities, Indianapolis, Toledo, Cleveland, Cincinnati and Pontiac, MI. In addition, further engineering and environmental work must be completed on routing alternatives between Dwight, IL and Chicago in the Chicago-St. Louis Corridor. Beyond these Phase II projects, the MWRRI states will also develop the remaining projects in the system plan, including: Chicago to Grand Rapids/Holland, Port Huron, Carbondale, Quincy, Quad Cities-Iowa City-Des Moines-Omaha and Green Bay; and St. Louis to Kansas City.

Ohio is developing its passenger rail service for its 260-mile “3-C” (Cleveland-Columbus-Dayton-Cincinnati
) Corridor, which will reach 60 percent of Ohio’s population and is the most populated Chicago hub network corridor without rail service. Ohio is currently working on this project in partnership with freight railroads and Amtrak.

Much work has already been done to move these corridor projects closer to implementation. This work and the proposed next steps follow:

Some Phase II projects are ready to go – for example, the St. Paul Union Depot project, which is being renovated to serve as a hub for Amtrak, inter- and intracity bus and passenger rail. In late 2009, the Northstar Commuter Rail Line, Hiawatha LRT and intra-city bus will all converge adjacent to the new Minnesota Twins Target Field in Minneapolis. 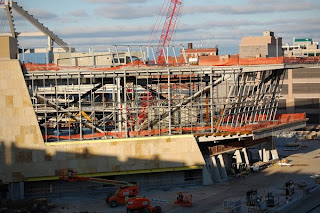 Since President Obama has outlined his high-speed rail vision for the nation, the nine states see a long-term policy and funding partner in the federal government for building the nation’s high-speed passenger rail network.

According to Transportation Economics and Management Systems, Inc., the development of the MWRRS will significantly expand the region’s economy. Economic gains include:

MWRRS will support existing industries and foster the growth of new businesses cross the Midwest by improving access between communities. It also will encourage large businesses to distribute their operations more widely into smaller, highly accessible Midwestern communities that provide a high quality of life for residents.

Opponents of high-speed rail claim the use of buses is less expensive and more flexible.

While buses do have a greater flexibility than rail they also contribute to increased highway traffic, pollution and congestion. The objective should be to use buses and rail in concert with each other to provide the optimum transportation system available.

ARTBA’s Critical Commerce Corridors (3C) (see video in sidebar) is an example of what our infrastructure could become. To get there we need a coordinated effort and right now we have the best opportunity we have had in decades and probably the only one for decades to come. We are making investments in our future. We need to invest wisely.