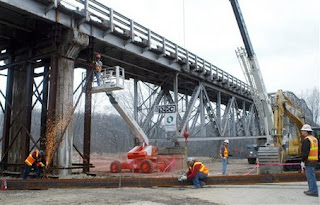 Within minutes of the stimulus bill being signed, Missouri DOT went back to work on fund-needy projects. State highway officials did their homework and had the first project ready and waiting. Before the ink could dry a crew had started work replacing a bridge in central Missouri that was built in 1933 and was closed to large trucks in 2007 because of structural concerns. A badly deteriorating steel beam was identified during inspections conducted after the deadly Minnesota bridge collapse. 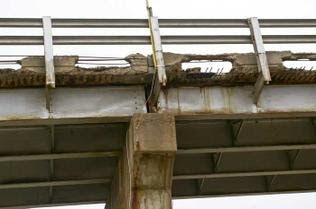 by Michael Jones/Lake Media
The 1,084-foot bridge carries traffic on Missouri 17 across the Osage River — a tributary of the Missouri River — about 30 miles southwest of the state Capitol in Jefferson City. The new bridge will be expanded by 8 feet to a total width of 28 feet and shortened to 970 feet. The project is scheduled for completion in September 2010 at a cost of $8.5 million.
There are varying reports on the number of workers that will be employed on the project. In an article posted by Cleveland.com it reads, “The construction is to be handled by APAC-Kansas City, a division of Atlanta-based Oldcastle Materials Inc. A company spokeswoman said the bridge project is likely to employ 25 to 30 mostly local workers.” This refers to the number of union employees that APAC-Kansas City will most likely be hiring. Whereas the number of employees referred to in the following piece would also include the subcontractors who are not APAC-Kansas City employees, according to APAC-Kansas City Human Resources Department.
In the St. Louis Post Dispatch, STL Today.com announcement, the employee count reads, “The contract for the bridge was awarded to APAC-Kansas City and will allow the company to rehire some employees who were recently laid off, said company president David Guillaume. An additional 120 workers will be hired locally to work on the bridge project, with a total of 250 jobs supported by the work.”
The State of Missouri has opened a website to keep it’s citizens, and everyone else who is interested, informed of how stimulus bill infrastructure funds are being used.
In 1956, Missouri became the birthplace of the nation’s interstate system by becoming the first state to award a contract under the Federal-Aid Highway Act. Today the Show Me State again made history by being the first state in the nation to award and begin construction on transportation projects funded by the federal economic recovery package signed by President Barack Obama.
Other Missouri highway projects under construction that started yesterday include:
Barry/Lawrence/Christian/Greene Counties, Route 60 – Construct alternating/intermittent passing lanes from east of Chapell Drive in Monett to Kansas Avenue in Republic. $8.7 million
Clinton County, Interstate 35 – Resurface northbound and southbound lanes from north of Shoal Creek to north of Route 116 near Lathrop. $14.6 million
Pemiscot/New Madrid Counties, Interstate 55 – Pavement rehabilitation on northbound and southbound lanes from I-155 to Scott County. $18.4 million
“Today the ‘Show Me State’ again showed the nation we are leaders in transportation by having the first economic recovery act project in the country under construction,” Missouri Department of Transportation Director Pete Rahn said. “We promised we would be ready to go to make the best use of every dollar we receive through the economic recovery act to create jobs and make our highways safer. We delivered on that promise and then some.”
Missouri will receive approximately $637 million for road and bridge projects and an estimated $150 million to address air, rail, transit, waterway and pedestrian projects throughout the state. That amount of work will create an estimated 14,000 jobs and have an estimated $2.4 billion impact on the state’s economy.
“We’re taking this aggressive approach to demonstrate that funding for transportation infrastructure can and will provide the direct and immediate economic jumpstart our nation and state need,” Rahn said. “We will use every penny sent to our state to improve our roads and bridges and we will be ready to put additional money not used by other states to work in Missouri.”
The benefits of this additional work would go beyond those building the projects to suppliers, retailers, restaurants, hotels and other businesses Rahn added.

Positive news such as this can go a long way towards pushing a recovery. As a country we need to believe in our leaders, we elected them; we need to have faith in their judgment; we need to support their decisions. Or, we need to replace them if we can’t…
AGC: Stimulus to Save 2M construction jobs
Associated General Contractors of America (AGC) says the $135 billion in construction and infrastructure included in President Obama’s $787 billion stimulus legislation will create or save nearly 2 million jobs over the next two years.

AGC Economist Ken Simonson, and Stephen Fuller of George Mason University analyzed the legislation and concluded the funding would create or save 650,000 construction jobs, 300,000 jobs in related fields and 970,000 jobs to support the investments.

“There’s no doubt the stimulus will have a positive impact for construction businesses and their workers across the country,” says Stephen Sandherr, chief executive of AGC.

“When you get beyond the politics and the policy, the fact remains these investments will put people to work, save businesses, and help rebuild aging infrastructure.”

Simonson said the $135 billion for construction would increase personal earnings by $75 billion and add $230 billion to the gross national product.