How important is leaving a legacy when compared to jumpstarting the economy? Maybe President Franklin Roosevelt’s prescription for the Great Depression included the same general public works spending found in the economic recovery bill just signed by President Barack Obama. And maybe FDR left a legacy of engineering marvels that still adorn the landscape — from the San Francisco-Oakland Bay Bridge and Grand Coulee Dam to La Guardia Airport and New York’s Triborough Bridge. 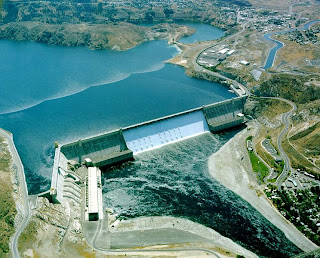 But what’s more important to the people who find themselves out of work now – a legacy or a job?

Don’t look for similar monuments to emerge from the new American Recovery and Reinvestment Act, despite its $787 billion price tag. Billions of dollars in infrastructure spending are likely to go for less glamorous projects, such as repaving battered streets, repairing rundown schools and replacing aging sewer lines, and these are more important.

The tight timeline for the spending makes grand projects all but impossible. Half of the money for highways and bridges must be obligated within 120 days, the other half within a year.

The intent is to put people to work and pump money into the economy quickly, and infrastructure construction is one way of doing this.

”So we concentrated on projects that were ready to go … projects that were just waiting for the money so they could be built,” said Jim Berard, spokesman for the House Transportation and Infrastructure Committee. “Most of those are not sexy things but are badly needed nonetheless.”

Still, Robert Poole, director of transportation policy at the Reason Foundation, a Los Angeles-based free market think tank, said, “Obama’s early statements on the stimulus—comparing its impact to that of Eisenhower’s Interstate highway program—created a false expectation that it would be comparable to the New Deal in building great new public works. The sad reality is that the bill Congress wrote and Obama signed is mostly make-work stuff.”

New Deal projects included some of the same kind of work that is expected to be funded by the stimulus. But it also included projects that stand out today, from works of art such as the monuments to astronomers in front of Los Angeles’ Griffith Observatory and an Art Deco-inspired fountain in front of the Hollywood Bowl to public works such as the Lake Shore Drive Bridge that provides a key link in Chicago’s lakefront road system.

Many of the new projects may not be glamorous, but they’ll put people to work, the bill’s supporters say.

“Resurfacing, painting, lighting and maintenance programs are not as flashy as building a new bridge, but as projects they are no less important,” said Jeff Solsby of the American Road and Transportation Builders Association (ARTBA). “They provide important benefits and create jobs to grow the economy.”

And some local officials react sharply to criticism that they’re thinking small.

After the Northern California city of Hercules drew criticism for listing a duck pond park and dog park as possible uses of stimulus money, the city declared in a statement: “Any job that puts someone to work is vital to both that individual, our community’s and our nation’s overall economic well-being.”

Brian Turmail of the Associated General Contractors of America (AGC), added: “Just catching up on a big backlog of maintenance needs in itself will have a lasting legacy.

“In some older inner-city areas, if that money were used for school renovation, you wouldn’t get a Grand Coulee Dam, but you’d get a legacy that would be just as significant in those communities of going from buildings that are largely eyesores to buildings that are sources of community pride,” he said.

Some big projects, nonetheless, may move forward under the stimulus bill. New York and New Jersey hope to receive $1.5 billion toward a new rail tunnel under the Hudson River.

Gray Brechin, a visiting scholar at the University of California, Berkley’s Geography Department and project scholar of California’s Living New Deal Project that is cataloging FDR’s public works legacy, suggested it may not be so bad that a large chunk of the spending is going to maintain existing infrastructure.

Noting that the American Society of Civil Engineers (ASCE) has given the condition of U.S. infrastructure a grade of D, he said: “We now have an enormous hole out of which to climb. It’s a good thing that the New Deal workers built as well as they did, since they never could have imagined that we would stop maintaining what they left us.”

Moreover, says Robert Leighninger Jr., author of “Long-Range Public Investment: The Forgotten Legacy of the New Deal,” FDR’s big projects were what the United States needed as it moved into a new era.

“Our needs for infrastructure, physical and cultural, large and small, were much greater then,” he said. “Building schools that had science labs, music rooms, gym/auditoriums and other uncommon facilities along with whole new university campuses improved the quality of education to prepare us for the role we were about to play in the world. Water and sewer works in small towns and large cities averted public health catastrophes that were looming. And some of the things that weren’t essential right away were very useful later on, like our state park system.”

Marvin Malecha, president of the American Institute of Architects (AIA), said the focus of the new stimulus spending represents a change in attitude, including the emphasis on spending to reduce dependence on foreign oil.

“There may not be the sort of impact from a physical standpoint that New Deal projects had,” he said, but “if a framework for a 21st Century mass-transit system is developed and we can minimize the 1 in 5 children who spend their school days learning in a trailer, then there will be a tremendous, positive lasting impact.”

I don’t know about you, but I for one am more impressed with solving our infrastructure problems than creating monuments. Let’s face it, we want our children and grandchildren to live in an economic environment that is free from the stresses we are all experiencing. We need to build for the future now and in so doing we will bring our economy back up to its status as the strongest and most stable in the world.