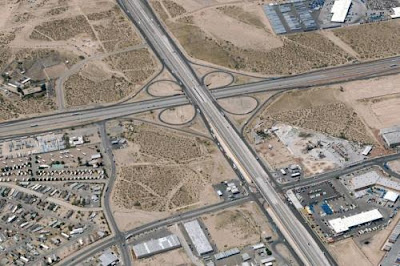 by Brian Kanof/Special to the Times
The statewide wish list for road projects from the federal stimulus plan includes a request for $260 million to build a second “spaghetti bowl” in El Paso, TX.

Texas is set to get about $2.2 billion from the federal government to help put people to work building new roads and bridges and repairing existing ones. Texas Department of Transportation (TxDOT) staff on just released a list of projects they recommend to receive about $1.2 billion. The other $1 billion is reserved for local projects and transit systems like buses and rail.

El Paso had asked TxDOT for a portion of that money to help the city build a second spaghetti bowl in East El Paso worth about $260 million. The project would build eight connector ramps to help drivers get from Interstate 10 to Loop 375.

TxDOT staff recommendations released today, however, suggested that the state help the city out with four of those ramps. “If that’s the recommendation, we would be doing extremely well,” said state Rep. Joe Pickett, (D-El Paso) chairman of the House Transportation Committee. “I called it outrageous or real aggressive going for eight,” Pickett said.

Local leaders said they were pleased with the recommendations.

Recommendations from TxDOT staff included four of the connector ramps for a total of about $146 million, of which the city would contribute just less than half.

“I’d love to have everything, but no one got everything,” said El Paso businessman Ted Houghton, a member of the Texas Transportation Commission.

TxDOT spent months coordinating with local officials to decide which projects were the most important for each region and had the best chance of bringing home federal stimulus dollars meant to create jobs and spur economic growth.

They had to narrow down a list of about $13 billion in projects around the state to the list of $1.2 billion released Wednesday.

The department created six criteria for projects that would get a portion of the stimulus funds. Among other things, the projects should improve safety, create long-term economic benefit and be located in areas that are economically distressed.

The commission is set to vote next week on the recommendations.

Chuck Berry, El Paso district engineer for TxDOT, said if the commission approves the El Paso project, construction would likely begin with a few months. Federal guidelines that require states to spend the money quickly or lose it mean that construction has to start soon, Berry said.

Federal legislation requires half the stimulus money be designated for specific projects within the first six months that it’s available, and the rest must be designated within a year.

“Somewhere around two to two-and-a-half years, we should be driving on some of those ramps, if not all of them,” Berry said. About 175,000 cars a day will use the interchange when it’s built.
Building all eight ramps, Berry had said, could mean about 400 construction-related jobs in the area. A project like the one recommended for El Paso could employ 150 to 200 workers.

City leaders still plan to build all eight ramps to connect Loop 375 and Interstate 10 and create a second spaghetti bowl, Berry said. Building the other four, though, will take longer as transportation officials search for money to complete the project.

“The AGC membership represents the top highway, bridge and underground contractors in Iowa,” said Robert Cramer, Executive Committee member, AGC of Iowa. “Our companies face an ongoing need for skilled labor. The AGC of Iowa Career Center will help us meet this demand.”

“After over a decade in the career center business and with our background in the construction industry, IPG is well positioned to make the AGC of Iowa Career Center succeed,” noted John von Harz, president of IPG. “We look forward to working with AGC of Iowa to deliver a reliable supply of quality skilled labor.”