Hawaii Governor Linda Lingle (R) and State Transportation Director Brennon Morioka released a list of state and county projects yesterday that will move forward using the $246 million in federal stimulus funds to improve transportation infrastructure statewide made available through the American Recovery and Reinvestment Act (ARRA). The complete list was due to U.S. Secretary of Transportation Ray LaHood today.

The state estimates the federally funded transportation projects will generate approximately 3,170 jobs statewide in the construction industry and other related sectors. The Department of Business, Economic Development and Tourism estimates that for every million dollar in stimulus money invested, 12.9 jobs will be created or preserved.

The federal stimulus funds will further support Hawaii’s efforts to modernize the state’s infrastructure, including the Airports Modernization Plan launched in 2005 and the Highways Modernization Plan launched this January. The federal funds will also augment the $1.8 billion Capital Improvement Projects (CIP)unveiled by Governor Lingle in December 2008, whose goal is to start more than 1,500 construction projects within the next 18 months. 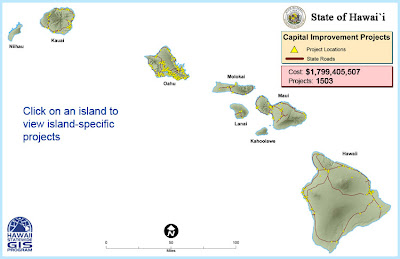 “Because of our ongoing focus on investing in the repair and modernization of Hawaii’s infrastructure, especially our critical transportation systems, Hawaii is well positioned to take maximum advantage of the federal stimulus package and create jobs for our residents,” said Governor Lingle. “These projects will further our efforts to stimulate the local economy while improving our infrastructure system for Hawaii’s long-term future.”

Determining which state and county road projects would be funded required an unprecedented level of coordination and collaboration between the Federal Highways Administration, the state Department of Transportation (DOT), the four county mayors and their transportation directors, and the Oahu Metropolitan Planning Organization (OMPO). The funding for the county highway projects is being coordinated through the state Department of Transportation, which is serving as the lead conduit for transportation projects statewide that will receive federal stimulus funds.

“We are the first state to finalize our project list and begin utilizing the federal stimulus funds,” said Brennon Morioka, director of the state Department of Transportation. “This was made possible because federal, state, and county officials were able to sit down at the same table and work efficiently and effectively so that we can save and create jobs. We are making smart investments by choosing these projects wisely. This effort has not come easily … it has been all about working together,” he added.

In assessing the potential road projects, state and county officials considered each project’s timeline, including if the project could go out to bid in the next few months and whether an environmental assessment would be needed. In addition, it was important to ensure the projects were fairly distributed geographically, including in economically distressed zones and areas where the project would have an impact in creating jobs.

The state has also been working closely with Sen. Dan Inouye (D)and his staff to help facilitate the flow of federal funds to Hawaii.

“The purpose of the American Recovery and Reinvestment Act is to jumpstart economic growth for our nation,” said Sen. Inouye. “For Hawaii, today’s announcement of highway and airport projects moves us in this direction. I am very pleased that the state and counties worked together expeditiously to arrive at this list that will create jobs and improve infrastructure throughout the state. I support the projects on each island. Let us continue in the spirit of cooperation to ensure that the projects are completed on time and on budget.”

As part of the requirement to ensure transparency and accountability of how taxpayer dollars are being spent on the economic recovery, each project had to meet five crucial objectives. In addition, the Governor had to provide signed certifications and assurances to the U.S. Department of Transportation that the projects meet the necessary requirements to be eligible for federal stimulus funds.

The five primary objectives outlined for federal agencies and the nation’s governors, who are serving as the conduit for funds distributed to their states, ensure that:

The state projects (see maps posted on website) include: 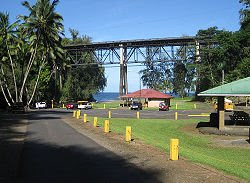 State highway projects using federal stimulus funds will go out to bid following state procurement guidelines. The projects will be posted for advertisement on the state’s procurement notice system website: www.hawaii.gov/bidapps. Interested contractors can also visit the DOT Contracts Office at 869 Punchbowl Street to speak to someone directly for more information about the projects. Consistent with state guidelines, each project will be advertised for 30 days, at which time all bids are due.

The county projects include:

Airports ($76,500,000)
The state Department of Transportation’s Airports Division will receive approximately $76.5 million in federal stimulus funds, which will help advance the state’s six-year Airports Modernization Plan, which began in 2005.

The bulk of the funds, $61.5 million, will be used to install Explosive Detection Systems (EDS) at Kahului Airport ($18.5 million) and Honolulu International Airport ($43 million) to screen and process checked baggage.

EDS improvements are part of the state’s current Airports Modernization Plan, which helped in securing the federal stimulus funds. Hawaii was selected by the Transportation Security Administration (TSA) as one of only 11 states that will share in $700 million in federal stimulus funds for the procurement and installation of the EDS nationwide.

“We’re pleased to be one of only 11 states in the nation to receive the funding for these important airport improvements, which will cover 90 percent of the projects’ costs,” said Governor Lingle. “The federal money will allow us to leverage our funds for other state airport projects that are already part of our Airports Modernization Plan,” she added.

“The Kahului EDS project is already underway and the Honolulu project is ready to go, which is why I believe these projects were chosen,” stated Brian Sekiguchi, DOT-Airports deputy director. “We’ll be able to utilize these funds and create more jobs right away.”

The EDS projects at Kahului Airport and at the Overseas Terminal at Honolulu International Airport will relocate the security equipment from the ticket lobbies to behind the ticket counters, resulting in more spacious lobbies for the passengers. The equipment will be integrated into the outgoing baggage conveyor system, which will cut down on the time it takes passengers to check in baggage. Also, because TSA staff will no longer need to monitor the EDS, they can be redeployed to the passenger check points.

An additional $15 million will go toward building a new apron at Kahului Airport, which is also part of the state’s Airports Modernization Plan. The new apron, which is ready to advertise this month, will provide space for more aircraft to fly in and out of Kahului. Construction is scheduled to begin in June 2009 and be completed in May 2010.

Bus Transit ($43,800,000)
The four counties will share $43.8 million in Federal Transit Administration funding to improve public bus transit systems, including transit center improvements, bus shelter projects and bus purchases. The City and County of Honolulu will receive $40.9 million. The remaining $2.9 million will be evenly split between Maui, Hawaii and Kauai Counties. The funding will be channeled through the state DOT to the four county transit agencies.

Massachusetts largest employer organization, Associated Industries of Massachusetts (AIM), is “backing away” from a coalition of transportation policy interest groups, in part because of the coalition’s advocacy for a higher fuel levy. The umbrella group, Our Transportation Future, which recently financed a public opinion survey showing support for a gas tax increase, includes local advocacy organizations, including the state chapter of the National Association of Industrial and Office Properties, MassPIRG, Alternatives for Community Environment, A Better City, the Massachusetts Building Trades Council, the Conservation Law Foundation, the Western Massachusetts Economic Development Council, and the MA Municipal Association.

John Regan, executive vice president for government affairs at AIM, said Friday that AIM was “backing away” from Our Transportation Future. “We’ve distanced ourselves from that coalition and we’re now doing our own things, because we feel it’s important to chart a course that reflects the feelings of our board directors.”

Regan said AIM was concerned the state’s effort to tackle a gaping transportation debt could feature too much revenue and not enough reform. “This is not an anti-gas tax position,” he said. “It is a position much like the Senate’s, which is you’ve got to do the reforms first, and demonstrate that there’s real serious effort underway to reform the way the Commonwealth does its business in the transportation arena.”

AIM’s name has been removed from the Our Transportation Future website. Their organization was notably absent from a group of business organizations that endorsed a 25-cent gas tax hike we reported on Friday.

CSDA Elects 2009 Officers and Board Members 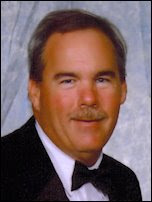 Richard Long, who served as CSDA president in 1993, received the Lifetime Achievement Award, which was presented by outgoing President Tom Stowell. This award was presented to Long for rendering over 20 years of outstanding service to the sawing and drilling industry and the CSDA during the Gala Dinner and Awards Ceremony. In over eight of these years he served as a board and committee member and as chairperson for two standing committees. By meeting the criteria set, and with the nomination and approval of the board, Long becomes only the second member of the industry to receive this award since its inception in 2005.

Founded in 1972, CSDA has more than 550 international member companies.

Congratulations to all the newly elected officers and board members!