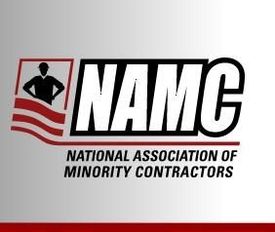 The four-day conference was held in mid-June at the Hilton Americas in downtown Houston. More than 300 NAMC members representing 16 chapters in the U.S., general contractors and elected officials attended the conference.

The 43rd annual NAMC conference had numerous workshops (including “Business Opportunities with the Federal Government,” “Chapter Development Strategies,” “Green Construction,” and others) and notable speakers including LaDoris “Dot” Harris, recently appointed by President Obama as Director of Economic Impact and Diversity at the U.S. Department of

“We are an organization — organizations get things done a lot faster than individuals can!” said outgoing president Francis Onwualu. “It is with our collective voice that we promote the economic and legal interests of minority contracting firms. It is our organization that has a relationship with our friends in government and private industry who support us.”

NAMC is a non-profit trade association established in 1969 to address the needs and concerns of minority contractors. NAMC provides advocacy, networking and construction opportunities to minority- and women-owned businesses throughout the United States. While membership is open to people of all races and ethnic backgrounds, the organization’s mandate, “Building Bridges–Crossing Barriers,” focuses on construction industry concerns common to African Americans, Asian Americans, Hispanic Americans, and Native Americans. NAMC chapters around the country provide advocacy and education to its membership, which consists of a diverse base of firms including, MBE’s, DBE’s, WBE’s, 8(a), HUBZONE, SDB, SDV, and small business construction firms. For more information about NAMC and the conference, visit NAMCTEXAS2012.org.