The Cat G130B Contractors’ Grapple is a heavy-duty, durably constructed tool designed for structural demolition, material handling and utility application, such as sorting and loading rock, scrap and construction debris. The Cat G130B works ideally with a range of models in the Caterpillar medium-hydraulic-excavator lineup, and its design assures flexible, efficient operation, as well as compatibility with both C and D-Series Cat excavators.

The grapple uses a two-over-three tine configuration that allows the three tines on the slightly curved lower jaw to sink into scrap piles, while a pair of tines on the interlocking upper jaw exerts hydraulic power to retain material securely on the large working surfaces of the jaws. The long tines, coupled with wide spacing, allow good visibility to the working area.

Abrasion-resistant AR 400 steel, used for tine tips, wear plates and wrappers—the thick curved sheets that form the grapple’s inner working surfaces and outer shell—assures durability in the harshest environments. Box-type construction yields a strong, rigid design without unnecessary weight. In addition, the replaceable tine tips are flush-mounted with the inner wrapper. The flush design, coupled with the precise curve of the lower jaw, assures that material slides out with no obstruction when the grapple dumps.

The pin-hub, which is the hinge for the upper and lower jaws, as well as the attachment point to the carrier, features a modular design that keeps the jaws of the grapple connected even with the mounting pin removed. This feature greatly simplifies grapple installation and removal.  The modular pin-hub also allows the grapple to match with different linkage systems, simply by changing the pin group. The compatibility of the grapple to work with both C and D-Series Cat excavators allows contractors and rental firms with both types of machines to extend 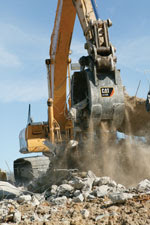 the return on their grapple investment.

The Cat G130B grapple either pins directly to the digging arm of the carrier, or attaches via a pin-grabber-type coupler, allowing the owner to use machines as presently configured. 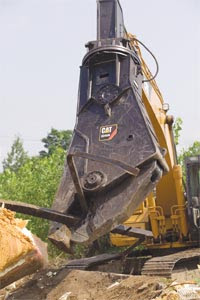 The new Cat B-Series models, featuring a 360-degree hydraulic-rotation system, match the capabilities of a broad range of Caterpillar hydraulic excavators used in scrap-metal processing and in demolition operations that require reduction of large structural elements.

Among the significant features of the new shears is the straight lower jaw, which flattens beams, pipes and columns and distributes the material evenly along its entire length. Most shears use a lower jaw with knives that angle downward to the midpoint of the jaw, forming a triangular-shaped opening (apex). Conventional shears, with an apex in both the upper and lower jaws, tend to concentrate the mass of material in the center of the jaw, thus increasing cutting difficulty. The new straight lower jaw used with Cat B-Series shears prevents material concentration, and in doing so, effectively enhances cutting force.

Increased hydraulic power in the new Cat B-Series models allows a wider jaw opening to handle a greater volume of material, such as large structural steel pieces, large diameter pipe and bundles of pipe. In addition, the larger opening provides improved visibility for the operator when working at a distance and aligning the jaws around material.

High-strength retaining bolts thread directly into the knife sections of both the upper and lower jaws. Bushings around the bolts help prevent loosening, and a slotted shim plate, which slips over the bushings, simplifies knife changes. The four main knives, plus the side and front knives, are fully reversible and provide four long-lasting cutting edges. The weld-on piercing tip at the end of the upper jaw is made of extremely durable hardened steel. The tip can be repeatedly hardfaced (or easily replaced) to maintain upper jaw effectiveness.

The Cat B-Series shears also feature a newly designed adjustable hub to maintain an optimum cutting position between the upper and lower jaws as the knives wear. The new hub uses thicker (5 mm) shims for easier adjustment and has a new bolt-retention system that keeps the assembly tight.

In addition, a new housing protects the jaw cylinder through its complete cutting cycle, and a replaceable (bolt-on) wear plate protects the outside of the upper jaw. Large access panels (top, bottom and sides) and a jaw service lock assure fast and safe routine maintenance.

Generally, Cat shears are boom-mounted (pinned directly to the carrier’s boom tip) for scrap processing and for operations in which machine reach is not critical. In applications requiring significant reach, such as demolition, the shear normally mounts to the carrier’s stick (digging arm). Stick-mounting options include pinning directly, or, depending on the excavator model and specific stick, using a dedicated or pin-grabber-type coupler.