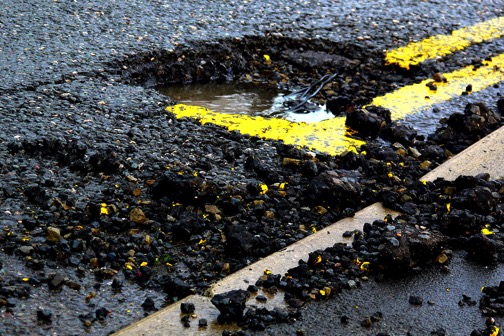 Driving on deteriorated urban roads costs motorists as much as $1,049 annually, according to a new report that evaluates pavement conditions in the nation’s large (500,000+ population) and mid-sized (200,000-500,000 population) urban areas and calculates the additional costs passed on to motorists as a result of driving on rough roads. Driving on roads in disrepair increases consumer costs by increasing needed repairs, maintenance, fuel consumption, and tire wear, and accelerating vehicle deterioration and depreciation.

These findings were released today by TRIP, a national transportation research group based in Washington, D.C. The report, “Bumpy Roads Ahead: America’s Roughest Rides and Strategies to make our Roads Smoother,” examines urban pavement conditions, transportation funding, travel trends, and economic development. Pavement condition and vehicle operating costs for urban areas with populations of 200,000 or greater can be found in the report and appendices. The charts below detail the top 20 large and mid-sized urban areas with the highest share of pavements on major locally and state-maintained roads and highways in poor condition, and the highest vehicle operating costs (VOC).

In 2016 one-third (33 percent) of the nation’s major urban roads – Interstates, freeways and other arterial routes – had pavements that were in substandard condition and provided an unacceptably rough ride to motorists, costing the average driver $599 annually. The nationwide annual cost to motorists of driving on deteriorated roads totals $130 billion.

“Drivers are paying a hefty price for our nation’s crumbling roads and bridges,” said Kathleen Bower, AAA senior vice president of public affairs and international relations. “Those traveling daily through urban cities bear the weight of the problem – with many wasting thousands of dollars each year on rising transportation costs due to potholes and wasted fuel. AAA urges Congress and the current administration to prioritize transportation infrastructure improvements to ensure safe, efficient and reliable mobility across the United States.”

Road conditions could deteriorate further as the rate of vehicle travel continues to increase and local and state governments find themselves unable to adequately fund road repairs.

“The needs of our nation’s infrastructure continue to grow. This report provides clear evidence that deteriorating roads are a strain on motorists and bad for the economy,” said U.S. Chamber of Commerce Vice President of Transportation and Infrastructure Ed Mortimer. “It is past time for federal lawmakers to come together to enact a long-term infrastructure modernization plan.”

“Motorists are facing a rough ride in many urban areas because of a lack of adequate funding for road repairs,” said Will Wilkins, TRIP’s executive director. “Some states and regional governments have begun to address their needs through recent funding increases, but it will also take action by the federal government. Congress can help by fixing the federal Highway Trust Fund with a sustainable source of user-fee based revenue.”

AMERICA’S ROUGHEST RIDES AND STRATEGIES TO

Keeping the wheel steady on America’s roads and highways have become increasingly challenging as drivers encounter potholes and pavement deterioration. One-third of the nation’s major urban roadways – highways and major streets that are the main routes for commuters and commerce – are in poor condition.  These critical links in the nation’s transportation system carry 70 percent of the approximately 3.2 trillion miles driven annually in America. Road conditions could deteriorate even further as the rate of vehicle travel continues to increase and local and state governments find they are unable to adequately fund road repairs.

In this report, TRIP examines the condition of the nation’s major roads, including pavement condition data for America’s most populous urban areas, recent trends in travel, the latest developments in repairing roads and building them to last longer, and the funding levels needed to adequately address America’s deteriorated roadways.

For the purposes of this report, an urban area includes the major city in a region and its neighboring or surrounding suburban areas.  Pavement condition data are the latest available and are derived from the Federal Highway Administration’s (FHWA) 2016 annual survey of state transportation officials on the condition of major state and locally maintained roads and highways, based on a uniform pavement rating index.  The pavement rating index measures the level of smoothness of pavement surfaces, supplying information on the ride quality provided by road and highway surfaces.  Following are the major findings of the TRIP report. 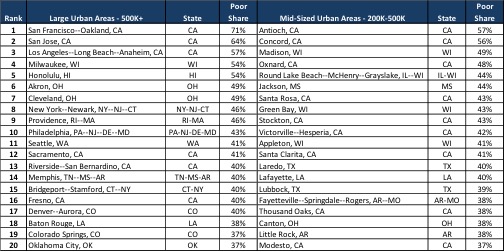 The average motorist in the U.S. is losing $599 annually – a total of $130 billion nationally – in additional vehicle operating costs (VOC) as a result of driving on roads in need of repair. These costs include 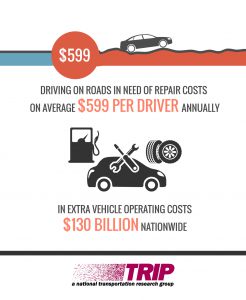 additional repair costs, accelerated vehicle deterioration and depreciation, increased maintenance costs, and additional fuel consumption. The chart below details the top 20 U.S. urban areas (500,000+ population and 200,000-500,000 population) where motorists pay the highest annual vehicle operating costs as a result of driving on rough roads. The report’s appendix includes VOC data for all urban areas with a population of 200,000 or more. 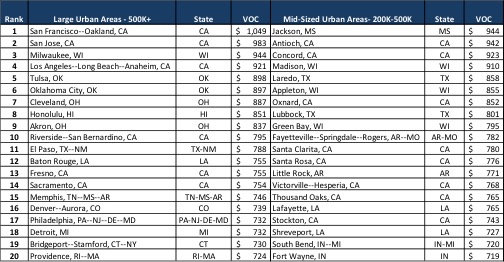 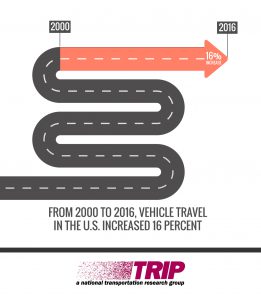 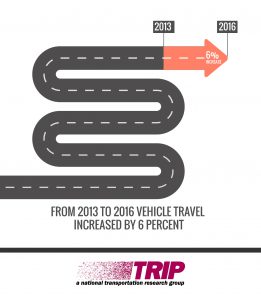 A SIGNIFICANT BOOST IN FUNDING IS NEEDED TO IMPROVE ROADWAY CONDITIONS

The design, construction, and maintenance of transportation infrastructure in the U.S. play a critical role in the nation’s economy, supporting the equivalent of four million full-time jobs across all sectors of the nation’s economy.  Approximately 63 million full-time jobs in the U.S. in key industries like tourism, retail sales, agriculture, and manufacturing are dependent on the quality, safety and reliability of America’s transportation infrastructure network.

For the full report visit TRIP