“The economic improvement that we had observed through March of this year has translated into better privately financed construction activity.” —ABC Chief Economist Anirban Basu. 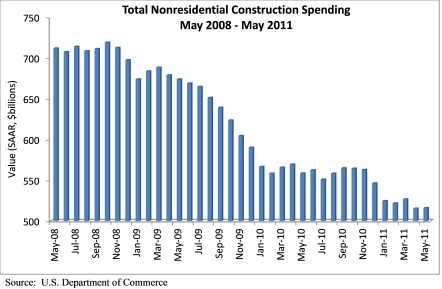 Eight of the sixteen nonresidential construction subsectors posted increases in spending in May, with the biggest gains experienced in power, up 3.6 percent; sewage and waste disposal, 3.6 percent higher; conservation and development, up 3.5 percent; and lodging, up 2.8 percent. Compared to the same time last year, only three subsectors posted gains, including power construction, up 9.9 percent; conservation and development, 3.8 percent higher; and commercial construction, up 0.1 percent.

“One of the most interesting developments is the increase in construction spending related to lodging, arguably the nonresidential construction segment most affected by the economic downturn and associated credit crunch,” said Basu. “Though the year-over-year loss in lodging construction activity is still large, it is falling as monthly data steadily improve.