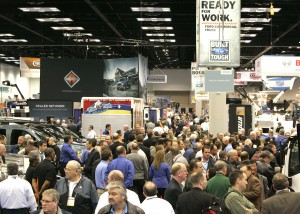 The Work Truck Show® 2011, held in conjunction with the 47th Annual NTEA Convention at the Indiana Convention Center in Indianapolis, IN, March 8-10, has broken all of its event records. Verified Show attendance was 10,020 — a 24 percent increase over 2010 and a 10 percent improvement over the previous record of 9,084 set in 2007. With an unprecedented 560 exhibitors occupying 16 percent more floor space than in 2010, the Work Truck Show 2011 was also the largest in the event’s 12-year history.

“This year’s record attendance demonstrates that the industry has made the Work Truck Show the must-attend event for everyone involved with vocational trucks and equipment,” says Jim Carney, NTEA executive director. “They recognize that this is their best opportunity to find the latest trucks and equipment, as well as industry-specific education and training. We had a great week in Indianapolis. The overall feeling was one of renewed optimism in the future of the industry.”

“Green” was a prevailing theme at the Work Truck Show. Many products that improve work truck fuel utilization were introduced. Show attendees took advantage of the opportunity to test drive a record 21vehicles in the Green Truck Ride-and-Drive on March 8 and 9. The Green Truck Summit also had record participation. Verified attendance at the Green Truck Summit was 683, an increase of 21 percent over the 2010 Summit. This is the fifth year for the Summit, which is jointly produced by NTEA and CALSTART.

The Work Truck Show returns to the Indiana Convention Center next year, and booth space is already selling quickly! Mark your calendars for March 6-8, 2012, with educational sessions, including the Green Truck Summit, kicking off March 5. Online registration opens at NTEA.com in October.