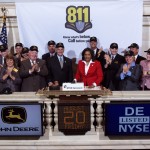 Representatives from John Deere Construction & Forestry, the Common Ground Alliance (CGA) and the Department of Transportation (DOT) rang the ceremonial closing bell at the New York Stock Exchange on Friday, August 20, to promote awareness of underground utilities through the use of the national 811 call-before-you-dig phone number. Though awareness and use of 811 has significantly decreased the number of underground utility strikes in the U.S., the fact that there are still fatalities and damages from hitting gas and utility lines underscores the need for a continued safety campaign.

“It’s not enough that the number of strikes has decreased in each of the last five years, because even one strike is too many,” said Bob Kipp, president of the CGA.

In 2004, it was estimated that there were 450,000 instances of damage from striking underground lines. However, as a result of the work of CGA and its many supporters, that number has decreased by over 60 percent to 170,000 damages in 2009.

“Through our support of CGA and 811, we strengthen our commitment to our customers. Our customers are our first focus and this initiative saves lives,” said Michael Mack, worldwide president, John Deere Construction & Forestry.

To further encourage safe digging, John Deere is also sharing portions of safety videos on YouTube beginning next month. The first video, featuring excavators, will be posted at http://www.YouTube.com/JohnDeere.

The FCC-designated 811 number was launched in 2007 by the CGA to eliminate the confusion of multiple call-before-you-dig numbers that were being used across the country. As a result, homeowners, farmers and contractors can call one easy-to-remember number to have crews mark a requested site for underground lines prior to any excavation.

Deere helped spread the word when the 811 number was first established in 2007 and has also been a driving force behind National 811 Day (each August 11) and the “Safe Digging Month” awareness campaign that occurs each spring. In addition to including information about 811 on its website, the company has featured the 811 logo prominently in its advertising and as part of its booth display during some of the construction industry’s most prominent trade shows.

The DOT’s Pipeline and Hazardous Material Safety Administration Administrator, Cynthia Quarterman, was also on hand at the bell-ringing event to lend support.