Skip to content
President Obama returned to his former stomping grounds to do a little stumping for the stimulus package that is now being finalized. The president has been busy this week traveling around the country gathering support.

As you listen to his speech think about what he’s saying. This bill isn’t intended to be a band-aid fix; the goal is establishing a more balanced foundation for economic growth. Although the Peoria speech was given at the Caterpillar plant to Cat employees it is intended for everyone who works. It doesn’t matter if the factory you work in makes yellow machines or family cars; what matters is the basic simple fact that we are economically interwoven.

The economic fabric of this country is like a tapestry with each of us representing a thread that once woven together creates the image. We impact on each other far more than we want to believe. The President pointed out this fact. If we don’t work we can’t contribute to the overall prosperity of the country. It’s that old ripple effect.

Peoria has been particularly hard hit by the economic downturn. Caterpillar, its largest employer, recently announced that, due to the recession, it will have cut some 20,000 jobs by the end of the first quarter of 2009.

“It is time for Congress to act,” Obama told workers as he stood in front of a backdrop of heavy earth-moving machinery. If the plan is passed, he promised, “a new wave of innovation, activity and construction will be unleashed all over America.” It will be “a major step forward on our path to economic recovery.”

Congress expects to send the stimulus package to Obama’s desk by the Democrats’ self-imposed Monday deadline.

If the bill is all but final, why the delay?

The House could have voted on final passage as early as Thursday, but House Speaker Nancy Pelosi pushed the vote back to Friday after many House Democrats, upset that some education spending was pulled from the final plan, said they wanted to read the bill’s language closely before voting.

MJX-MultiJob Backhoe at World of Concrete

The Haulotte Group introduced its new 360 degree complete rotation backhoe loader during Intermat (Paris, France) in 2006 and to the North American market at this year’s World of Concrete. The MJX Multijob is a multipurpose backhoe loader that is based on a unique design concept – the excavator rotates a full 360 degrees.

The excavator dipper stick can be either standard or knuckle boom while the loader is a single telescoping lift arm. The MJX Multijob is ideal for tight work areas and is good for roadwork on limited-space jobsites.

The machine’s horizontal reach and maximum dump height are among the highest in the market. The telescoping loader arm has man advantages and makes the machines safer since balance can be controlled because the bucket can be extended or retracted as the situation requires. Trench backfilling is safer since the MJX can stay back from the edge using the telescoping function to push the material back into the open trench.

Steer and drive functions are available in both working modes. The MJX gives the operator the choice of 2-wheel steer, 4-wheel steer or crab steer. 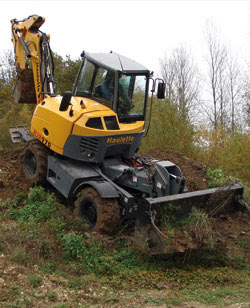 The MJX Multijob is difficult to describe because it has the attributes of a truck-mounted or rubber tired excavator and the characteristics of a telehandler but operates like a backhoe loader.