TRIP‚Äôs report, ‚ÄúOregon‚Äôs Transportation Chokepoints: The Top 50 Chokepoints and Remedies for Relief,‚ÄĚ ranks the state’s urban interchanges, highway segments, bus and rail transit routes, and sections of rural highways that provide inadequate mobility. These transportation chokepoints impede local, regional or interstate travel, diminish the quality of life of residents and visitors, reduce economic competitiveness and stifle economic growth and recovery by hampering commuting, commerce and other travel. In addition to identifying the chokepoints, the report also offers potential improvements for each segment that would ease the burden on travelers and allow for improved mobility.

Oregon‚Äôs top 50 surface transportation chokepoints include 38 roadway segments or interchanges, nine transit routes or corridors and three multimodal segments, which include both a roadway and a transit chokepoint. According to the TRIP report, the worst transportation chokepoint in Oregon is the I-5 Columbia River Crossing in Portland. This bridge is one of the nation‚Äôs top freight routes and a key regional commuting corridor. This chokepoint causes the worst congestion in the metro region and is one of the most severe bottlenecks on the I-5 trade corridor. The area is typically congested for four to six hours per day, and is projected to increase to 15 hours congested per day by 2030. The chokepoint could be eased by replacing the current lift bridge (which causes significant congestion when opened daily), extending light rail across the Columbia River into downtown Vancouver, fixing the crowded interchanges and including a bicycle and pedestrian facility over the river.

‚ÄúThis report underscores the need for the Columbia River Crossing project to move forward,‚ÄĚ said Sandra McDonough, president and CEO of the Portland Business Alliance. ‚ÄúTRIP‚Äôs findings confirm previous research showing the cost of congestion to the state‚Äôs businesses and residents. We support TRIP‚Äôs work to demonstrate how essential transportation infrastructure is to keeping not just our cars and freight, but our whole economy moving.‚ÄĚ

As part of reversing the current economic downturn and facilitating long-term economic growth, Oregon will need to address its numerous surface transportation chokepoints. Enhancing critical segments of Oregon‚Äôs surface transportation system will boost the state‚Äôs economy in the short-term by creating jobs in construction and related fields. In the long term, these improvements will enhance economic competitiveness by improving access and mobility, which will stimulate sustained job growth and improve the quality of life in Oregon.

In 2009, the Oregon legislature approved the Oregon Jobs and Transportation Act (HB 2001), which increased funding for local and state roads, highways and public transit systems, as a result of increased state registration fees, licensing fees and motor fuel taxes. The Act will provide $100 million for non-road transportation improvements, including public transit and, by 2011, when all fee increases are implemented, will provide an additional $300 million annually for local and state road and highway improvements. A number of the chokepoints identified in this report, including the I-5/I-205 Interchange, widening of US 26 from Cornell to 185th Avenue, Newberg-Dundee Bypass in Yamhill County, US 97/Murphy Road Interchange in Bend, I-5 Steep Grade Bottlenecks in southern Oregon, and I-84 Spring Creek section, may be significantly improved by funding allocated to specific projects under HB 2001.

‚ÄúIn addition to causing a headache for motorists, Oregon‚Äôs transportation chokepoints stifle economic development and growth at a time when it is desperately needed. Oregon can‚Äôt get where it wants to go ‚Äď in both a literal and an economic sense ‚Äď without an efficient transportation system‚ÄĚ said Will Wilkins, executive director of TRIP.

Following is the executive summary from the report. You can view the full report by clicking here.

The ease with which residents, visitors and businesses can access desired destinations has a significant impact on the quality of life enjoyed in a region. A reasonable level of mobility provides individuals and organizations with tremendous freedom in accessing activities and opportunities and provides significant freedom in choosing neighborhoods, employment, recreational activities, social and commercial opportunities.

When a transportation facility, including a roadway segment, an interchange, or a transit route, is not adequate to meet the demand for reliable mobility, the facility chokes local, regional or interstate travel, diminishing the quality of life of residents and visitors and reducing business productivity.

Oregon‚Äôs network of roads, highways and public transit systems allows this fast-growing state to provide safe and efficient travel, while enabling businesses to conveniently serve their customers. However, continued growth in Oregon‚Äôs population and travel is straining the capacity of the state‚Äôs surface transportation system and impeding quality of life by constraining commuting, commerce and other travel.

This report identifies the 50 worst surface transportation chokepoints in the state and the status of projects needed to relieve these chokepoints. Addressing these chokepoints will be critical in maintaining the high quality of life in the state by improving mobility, reducing delays, enhancing environmental quality and supporting economic growth.

The major findings of the report are:

Oregon‚Äôs quality of life and economic productivity are being reduced by chokepoints in the state‚Äôs surface transportation system. These chokepoints include major roads, highways and public transit routes that impede routine travel, commuting or commerce, or that place limits on economic development opportunities because of deficient design or a lack of adequate capacity.

‚ÄĘ¬†¬†¬†¬†¬†¬†¬†¬†¬†¬†¬† Two recent reports found that the state‚Äôs businesses, particularly in the Portland area, were responding to increasing traffic congestion by increasing inventories, decentralizing operations to serve the same market, increasing the number of deliveries and drivers because of longer travel times and starting production shifts earlier in the day to avoid peak congestion periods. 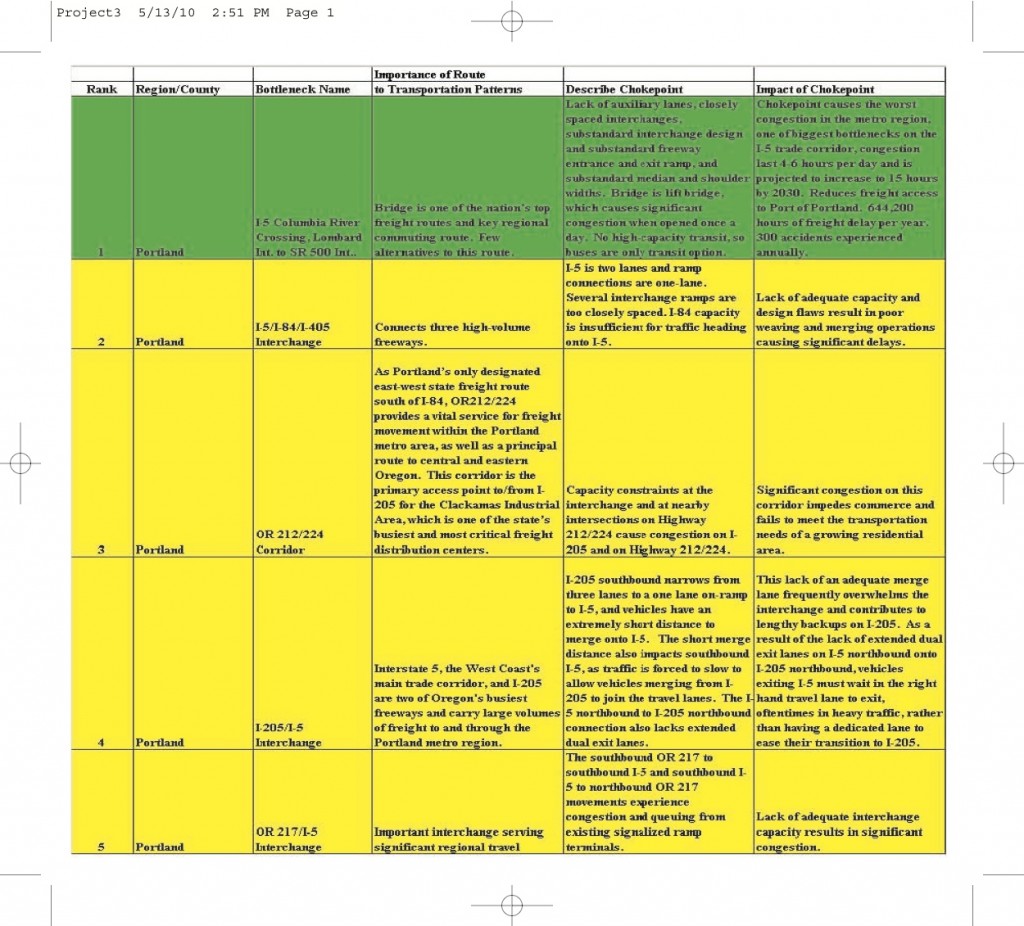 ‚ÄĘ¬†¬†¬†¬†¬†¬†¬†¬†¬†¬†¬† Oregon‚Äôs top 50 surface transportation chokepoints include 38 roadway segments or interchanges, nine transit routes or corridors and three multimodal segments, which include both a roadway and a transit chokepoint.

‚ÄĘ¬†¬†¬†¬†¬†¬†¬†¬†¬†¬†¬† In 2009, the Oregon Legislature approved the Oregon Jobs and Transportation Act (HB 2001), which increased funding for local and state roads and highways and public transit systems, as a result of increased state registration fees, licensing fees and motor fuel taxes.

‚ÄĘ¬†¬†¬†¬†¬†¬†¬†¬†¬†¬†¬† A number of the chokepoints identified in this report, including the I-5/I-205 Interchange, widening of US 26 from Cornell to 185th Avenue, Newberg-Dundee Bypass in Yamhill County, US 97/Murphy Road Interchange in Bend, I-5 Steep Grade Bottlenecks in southern Oregon, and I-84 Spring Creek section, may be significantly improved by funding allocated to specific projects under HB 2001.

‚ÄĘ¬†¬†¬†¬†¬†¬†¬†¬†¬†¬†¬† Federal spending levels for highways and public transit in Oregon are based on the current federal surface transportation program, the Safe, Accountable, Flexible, and Efficient Transportation Equity Act ‚Äď A Legacy for Users (SAFETEA-LU), which was approved by Congress in 2005. The SAFETEA-LU program expires on December 31, 2010.

Rapid increases in population, vehicle travel and economic activity in Oregon have outpaced improvements to the state‚Äôs roadway and transit system, resulting in increased congestion. Reduced transportation reliability in the state may become an impediment to economic development and may reduce tourism.

‚ÄĘ¬†¬†¬†¬†¬†¬†¬†¬†¬†¬†¬† Population gains are expected to continue at a significant rate in Oregon, increasing 28 percent by 2030 to approximately 4.8 million people.

‚ÄĘ¬†¬†¬†¬†¬†¬†¬†¬†¬†¬†¬† A report from the Reason Foundation found that traffic congestion in the Portland area is expected to more than double by 2030 unless the region‚Äôs transportation system is improved.

Relieving traffic congestion in Oregon will save time for travelers and businesses, provide additional employment in the state and increase the productivity of the state‚Äôs businesses.

‚ÄĘ¬†¬†¬†¬†¬†¬†¬†¬†¬†¬†¬† A 2007 report found that if Oregon modernizes and expands key segments of its highway system that by 2025 it would result in an annual increase of $1.7 billion in business output, would support an additional 16,300 jobs annually and in the Portland area would save the average household 28 hours of travel time annually.

Traffic congestion relief will require a comprehensive approach, which includes expanding the capacity of the state‚Äôs transportation system, improving the efficiency of the existing system and offering alternatives for some peak-hour trips. In order to accommodate the continued growth in vehicle travel, without experiencing a significant increase in traffic congestion, Oregon will need to both expand the capacity of its roadway and transit systems and make further improvements in the efficiency of its transportation system. These plans should continue to include and enhance:

All data used in this report is the latest available. TRIP‚Äôs report is based on information obtained from the Federal Highway Administration (FHWA), the Texas Transportation Institute (TTI), the Oregon Department of Transportation (ODOT), the U.S. Census Bureau and the Reason Foundation.