“The expectation is that privately financed construction volumes will continue to rebound gradually into the summer.” —ABC Chief Economist Anirban Basu. 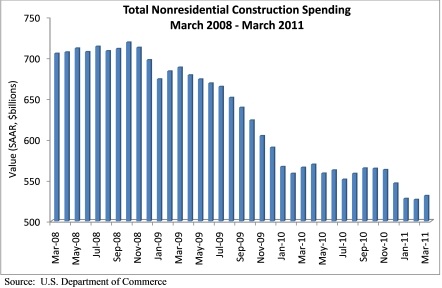 Of the six nonresidential construction subsectors posting decreases for the month, conservation and development was down 6 percent; communication was 2.5 percent lower; and water supply was down 1.9 percent. While posting significant increases for the month, several subsectors are lower compared to March 2010. They include lodging, down 31 percent; and manufacturing, down 28 percent. Other subsectors with decreases of more than 10 percent include religious, down 20.1 percent; public safety, down 17.6 percent; and office construction, down 13.7 percent.

“The transition from publicly financed activities to privately financed ones continues,” said Associated Builders and Contractors Chief Economist Anirban Basu. “In contrast to the trends of the past year, construction related to lodging, office and manufacturing was up in March, an indication that the economic recovery that began in mid-2009 is finally beginning to influence the nation’s nonresidential construction sector.

“Of course, skeptics are likely to point out that observed improvement in construction volumes between February and March may largely be a reflection of seasonal factors rather than economic ones,” said Basu. “It is true that February’s harsh winter conditions in much of the nation were not conducive to ongoing construction and that at least part of the monthly recovery is related purely to the weather.