The Denver, Colorado suburb of Northglenn sold 5.7 acres of vacant land to SCL Health Community Hospitals for the construction of a 60,000-square-foot community-based hospital and medical office facility. The location is less than a half mile from I-25.

The Northglenn SCL Health Community Hospital follows the new healthcare model, which favors smaller, more accessible hospitals located within neighborhoods. Yet, the three-story new hospital will provide many of the same services found in larger traditional hospitals, such as an emergency room, inpatient beds, and laboratory and imaging services.

AMI Mechanical Inc., based in Thornton, Colorado, is responsible for the fabrication and installation of all the mechanical systems in this small building with its 218 foot by 88-foot structure footprint. All the systems were fabricated in house in a clean, controlled environment, which made for a cleaner, safer worksite. This was an approximate $5 million project.

Since 1991, AMI Mechanical has established itself in the Rocky Mountain Region and handles projects ranging in size from $200,000 to $25 Million, with a yearly volume of $70 Million. In addition to their management, engineering and administrative staff, AMI Mechanical employs more than 275 skilled and experienced field trades workers. A crew of 20 or so worked on the SCL Hospital’s plumbing and waste piping system and eight to 10 were assigned to the project’s HVAC duct installation crew.

“The structure is tilt-up construction so once the concrete side forms were tied in place and we received the green light to go, things moved fast,” states Sean Lauck, BIM manager for AMI Mechanical. “We had plenty to do on our end but we needed to coordinate with the various other contractors to make sure the interior construction went smoothly.”

Hospitals require a lot of water, power, and proper air circulation for exam rooms and operating theaters, as well as X-ray facilities. It can be a more complicated build than a hotel or apartment building with similar number of rooms because of the critical need for environmental control and the sophisticated technology that can be used in the rooms.

“We’re dealing with a four to 4½ foot ceiling cavity that can be packed with cables, piping, lighting fixture housing, air circulation systems, and structural I-beams, so we need to know where everything goes precisely,” Lauck said. “There was no room for missteps or errors.”

Until the roof was built and enclosed the building, weather also became a challenge. There were bitter cold days and snowstorms. The snow and ice delayed AMI Mechanical until the decks were cleared.

AMI Mechanical created a digital model, which represents the physical, technical, and functional characteristics of the Northglenn SCL Health Community Hospital building. The model included 3D coordinates and vector information that represent the geometry of the building and its components.

The 3D digital model also details the entire network of piping and ductwork to be installed, as well as the structural elements, HVAC hanger anchor inserts, and penetration points on each deck where piping must travel through.

“For each of the three decks, we’re placing 3,000 to 4,000 hangers alone, which translates to a large amount of data,” Lauck stated. “And each hanger needs to be anchored at its correct point, which is where our total station and layout navigator instruments play critical roles.”

Lauck worked with GeoShack in Commerce City, Colorado to select the best technology for the project. GeoShack is an authorized Sokkia and Topcon dealer, which are products that Lauck has worked with for years, knows best, and prefers. GeoShack helped in selecting the best technology for the Northglenn SCL Health facility project and provided start-up assistance, training, and on-call troubleshooting help.

Also acquired was a Topcon LN-100 Layout Navigator using MAGNET Layout software, which is considered the first 3D positioning system designed specifically for construction layout.  The LN-100 uses laser and robotic total station technologies to create a totally new tool. The challenge the LN-100 addresses is the construction coordination, which was essential for the Northglenn site. 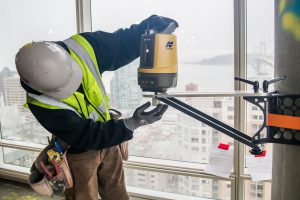 Lauck appreciated that the LN-100 could be mounted on a structural column so that there is less floor vibration than a floor tripod, which is susceptible to the jars and vibrations of materials being loaded on the floor for use, 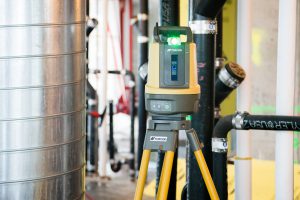 “Knowing what work has been completed during the project and working from the same design plan throughout is critical to maintain schedule and avoid costly collisions on this hospital project,” said Lauck. “The LN-100 helped us stay connected to the same design and focused on each critical step in the process.”

“Being able to access and apply the BIM 3D model through our robot and LN-100 made it possible to deliver the quality results we had planned,” Lauck stated. “Since we needed to coordinate our efforts with other contractors on the site, the technology allowed us to work faster and better—essentially accelerate our work flow when necessary to fit the needs of the other contractors.”
The Northglenn SCL Health Community Hospital facility was completed on schedule.

“This will be fun to visit the Northglenn hospital sometime in the future just to see it fully functioning,” said Lauck. “I’ll feel good knowing we’ve done a good job and everything in the building’s mechanicals is in place… exactly where it needs to be.”