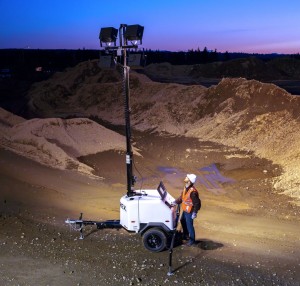 Terex recently introduced its newly-redesigned RL™-4 light tower. Already known for its reliable and cost-effective performance across jobsites varying from building and highway construction to oil field applications and sporting events, the newly-redesigned Terex® RL-4 light tower has significant improvements that make it an even stronger performer.

The redesigned light tower was introduced the company’s Rock Hill, SC facility where the unit is actually produced along with other Terex/Genie product. The facility was acquired in 2002 when Terex acquired Genie. The Rock Hill facility is comprised of two locations, one 110,000 sq ft and the other 115,000 sq ft. the trailer-mounted Z-Booms and portable light towers are produce here other products, — rough terrain telehandlers, scissors lifts, booms and the Genie Runabout with jib – are assembled, received and readied for distribution, and inspected here. Currently Terex has 190 people on staff at the two Rock Hill locations.

“Our RL-4 redesign focused on providing greater efficiency and improved performance for our light tower customers,” said Karen Stash, Senior Director, Global Marketing and Product management, Terex Aerial Work Platforms (AWP). “By pairing the vertical mast and larger 45 gallon fuel tank with the ability to get 17 units on a trailer, customers will see the benefits from day one.” 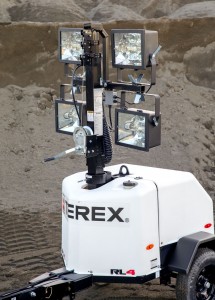 Marie Engstrom, associate product manager, Terex aerial work platforms covered the changes and innovations by giving a hands-on/walk around explanation of the unit’s innovations and changes . The Terex RL-4 light tower is 23.4 ft (7.13 m) in height with a width of 59 in (150 cm), and a stowed length of 85 in (215 cm). It has a dry weight of 1,461 lbs (663 kg) and has four metal halide 1,000 W lamps. High-density polyethylene covers eliminate corrosion and dents, and vertical mast with an internal mast brake offers 359-degree non-continuous tower rotation and a retractable mast cable.

The light tower’s new vertical mast dramatically cuts set up time by using only one winch for quick operation. Being able to stow the mast on top of the unit instead of hanging over the end reduces the potential that the unit will be damaged in transit. The light tower also offers a smaller footprint which lets you haul up to 17 units on a 48 ft trailer instead of the 10 units you were limited to with the previous model, resulting in significant cost savings. Engstrom,. “This allows the Terex RL-4 light tower to be 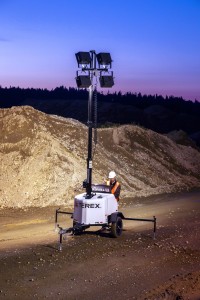 loaded on a truck sideways, across the truck, instead of down the truck’s length.”

Previously, the Terex RL-4 light tower had a 30-gallon tank and provided approximately 60-hours of run time. The new RL-4 light tower has a 45-gallon tank and an efficient engine which extends the run time to as long as 90 hours. The RL-4 light tower also has an optional autostart feature which uses a photocell or timer to turn on the unit automatically and run when you need it without having to manually start it. “By increasing the run time by up to 50 percent, the unit can provide light up to seven nights on one tank of fuel. That’s a tremendous efficiency,” said Engstrom.

The new Terex RL-4 has a Kohler® KDW1003 3-cylinder diesel, liquid-cooled engine with a 6.0kW power configuration. “This engine is considered to be one of the most popular workhorses in the industry and now it’s part of the Terex solution,” said Engstrom. Kohler has worked to make this engine quieter with less vibration. Terex and Kohler worked together to provide the RL-4 with a larger oil pan so it can go about 500 hours between oil changes. Combine the Terex service team with over 2,000 Kohler 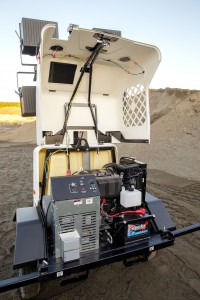 A noteworthy feature, which is standard on all models, is that they are equipped with universal telematics connections. According to Engstrom, all currently available telematics systems will work on the new light-towers.