Bridges are critical to our way of life on personal as well as commercial levels. Imagine where we’d be without them …

The total bridge inventory has increased over the last 10 years and the number of both structurally deficient and functionally obsolete bridges has decreased, but not significantly. If you’re interested in looking at the statistical data, you can find it online at http://www.infrastructurereportcard.org/fact-sheet/bridges.

Earlier this year the American Society of Civil Engineers (ASCE) published its Infrastructure Report card. According to its evaluation, bridges were graded a “C” which is “passing,” but you have to ask yourself the question, “Do I want to trust my family’s life to a C?” every time you drive over a bridge. Consider the number of times that you drive over bridges. Remember, not all bridges cross water; many cross other highways or wide open spaces.

ASCE’s report card states, “More than 26 percent, or one in four, of the nation’s bridges are either structurally deficient or functionally obsolete. While some progress has been made in recent years to reduce the number of deficient and obsolete bridges in rural areas, the number in urban areas is rising. A $17 billion annual investment is needed to substantially improve current bridge conditions. Currently, only $10.5 billion is spent annually on the construction and maintenance of bridges.”

As part of this report card, ASCE suggested plausible solutions, did an analysis of conditions and established parameters for the resilience of bridges within our roadway system. As part of the new Surface Transportation Program scheduled for authorization this year, ASCE recommended that the program should “establish a goal that less than 15 percent of the nation’s bridges be classified as structurally deficient or functionally obsolete by 2013 and should provide the funding needed to accomplish that.”

SAFETEA-LU, the current version of the Surface Transportation Program, expires on September 30 of this year. Rep. James Oberstar (D-Minn.), chairman of the House Transportation and Infrastructure Committee, recently introduced the committee draft of the proposed bill (http://www.site-kconstructionzone.com/search?q=Oberstar+Proposed+Highway+Bill) shortly after Secretary of Transportation Ray LaHood asked congress to consider passing an 18-month extension of the current bill. The Senate passed an 18-month extension on the bill, which will now go to the House. Current speculation is that there will be a compromise once the extension reaches the House. 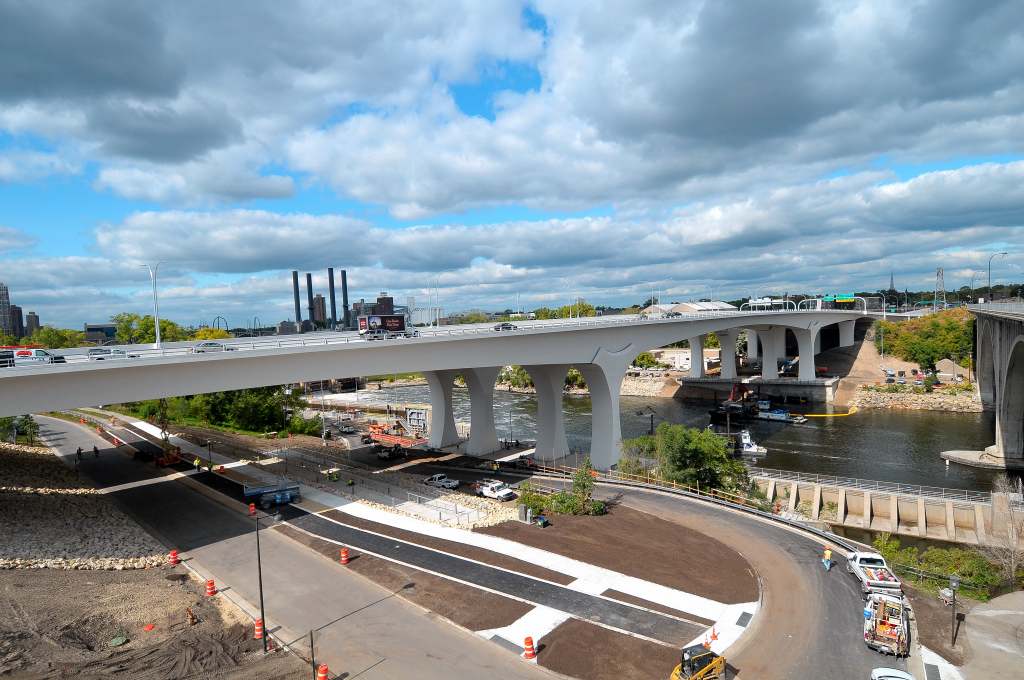 Oberstar’s draft “provides $337.4 billion for highway construction investment, including at least $100 billion for Capital Asset Investment to begin to restore the National Highway System (including the Interstate System) and the nation’s bridges to a state of good repair …” Chances of this surviving congressional compromising are slim. One of the biggest problems the Fund faces is funding. The current level of fuel tax revenues is inadequate and expected to become even more inadequate, and the current administration and most of congress refuse to raise taxes or implement other methods of collection.

Two years ago on August 1, 2007, the I-35W Bridge in Minneapolis Bridge collapsed during rush hour, killing 13 and injuring 145. The National Transportation Safety Board (NTSB) has cited a design flaw as the likely cause of the collapse, and asserted that additional weight on the bridge at the time of the collapse contributed to the failure.

Since this tragic event there has been an increased focus on bridge design, construction, rehabilitation and maintenance. Earlier this year the American Road and Transportation Builders Association (ARTBA) began operation of a new industry advocacy group under its umbrella – the Bridge Policy & Promotion Council. The BPPC was created to help boost investment, oversee policy development, promote improved project delivery methods, showcase new products and technologies, enhance industry communications and educate the public.

“The Bridge Policy & Promotion Council is aimed at breaking down barriers that exist in the U.S. bridge market,” BPPC Chairman Bob Luffy said. “While there certainly is a need for ‘product specific’ groups and technical forums in our market, what has been missing is the organizational structure and program that brings the bridge industry together to push for greater investment and improvement of delivery methods.” Luffy is chief executive officer of Coraopolis, Pa.-based American Bridge Company.

As a first order of business, the group is spearheading ARTBA’s activities to shape the bridge provisions in the next authorization of the federal surface transportation program, due by October 1, 2009. Members of the BPPC have already met with House Transportation & Infrastructure Committee Chairman James Oberstar and his staff to discuss bridge issues and program reforms.

In June of this year ARTBA announced the launch of a new strategic partnership with the International Bridge Conference (IBC) and the Engineers Society of Western Pennsylvania (ESWP). The 2009 IBC event – held June 14-17 in Pittsburgh, Pa. – also hosted the first membership meeting of the ARTBA BPPC, a new industry body created to help boost investment, promote new products and technologies, and educate the public and government officials about the importance of the bridge sector.

ARTBA and IBC/ESWP have entered a multiyear partnership to develop services and programs to include safety and regulatory training sessions as well as marketing campaigns to support future IBC events. Both organizations will jointly develop conference curriculum, product education and industry promotional material to increase bridge contractor participation.

“The Bridge Policy & Promotion Council is a collaborative opportunity to help accelerate the introduction and use of new ideas, products and technologies into the U.S. bridge market,” said Linda Figg, president & CEO of the Figg Engineering Group, designer of the new I-35W bridge in Minneapolis. “It provides the forum that brings major bridge companies together to achieve lasting and positive results for America’s infrastructure.”

Some positive things are happening around the country as a result of this interest in our bridges – here are a few. If you would like more information, please fell free to contact us.

Missouri Responded To The Stimulus Bill With Bridge Projects

Within minutes of the Stimulus Bill being signed, Missouri DOT went back to work on fund-needy projects. State highway officials did their homework and had the first project ready and waiting. Before the ink could dry, a crew had started work replacing a bridge in central Missouri that was built in 1933 and was closed to large trucks in 2007 due to structural concerns. A badly deteriorating steel beam had been identified during inspections conducted after the deadly Minnesota bridge collapse.

The 1,084-foot bridge carries traffic on Missouri 17 across the Osage River, a tributary of the Missouri River, about 30 miles southwest of Jefferson City. The new bridge will be expanded by 8 feet to a total width of 28 feet and shortened to 970 feet. The project is scheduled for completion in September 2010 at a cost of $8.5 million.

Starting in June, the Department of Transportation (through subcontractors) will embark upon an overhaul of the Brooklyn Bridge – its first in two decades – that is expected to take four years and cost as much as $500 million, at least part of which will come from Federal money. In addition to the arches and suspension wires getting repainted, the ramps, anchorages, joints and railings will all receive major structural repairs. (A 2006 report called the bridge’s condition “poor.”) Starting in the summer of 2010, Manhattan-bound traffic will be closed every few weekends.

Floyd Engelking, an applications engineer at Enerpac Integrated Solutions, shares a solution to a bridge construction problem. The expanded use of concrete in bridge construction brings with it challenges for the placement of some of the large heavy components. 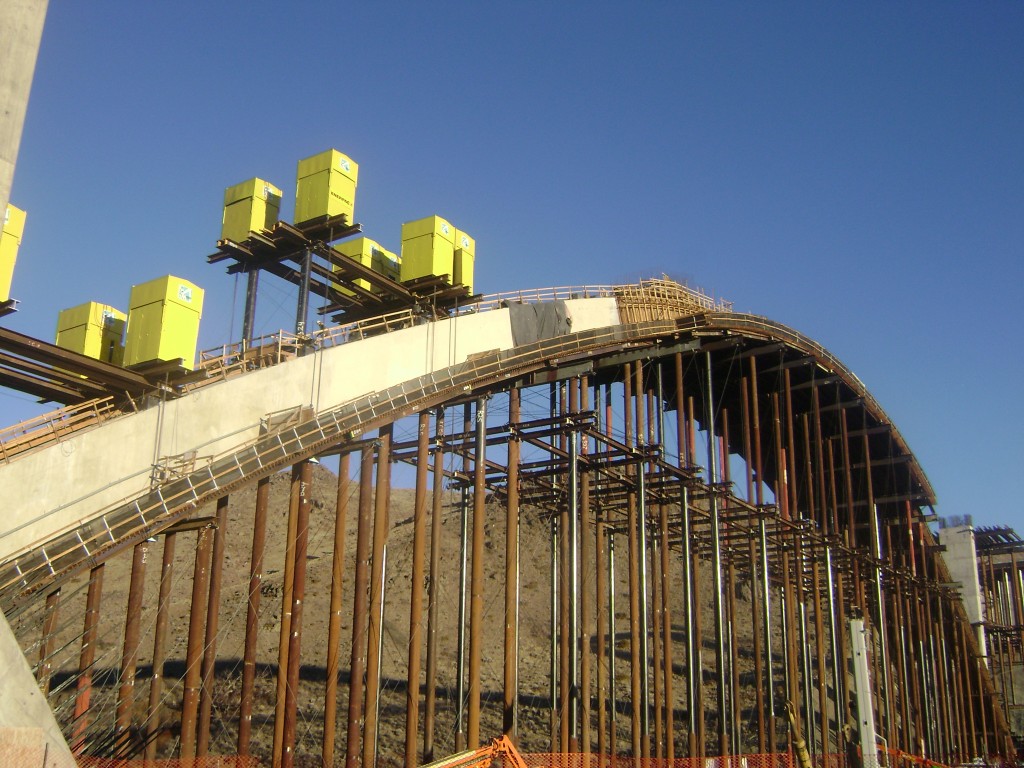 According to Engelking, contractor C.C. Myers is constructing a series of nine bridges for the new 8.5-mile highway I-580 extension between Reno and Carson City in Nevada. This is not a small undertaking. To illustrate, the Galena Creek Bridge is 1,722 feet long, with a 690-foot main span that rises 295 feet from the creek to the bridge deck. When completed, the concrete arch bridge will be the longest concrete-arch bridge in the U.S. It will actually comprise two arches, each carrying three lanes of traffic. (See The Project, at the end of the article, for location details.)

Concrete for the arch bridges is poured within a complex falsework structure, then the falsework is lowered away from the hardened concrete. While planning for the work it was noted that the falsework for this job would be too heavy to lower in the usual manner using cables and winches.

C.C. Myers chose a novel solution to the lowering challenge: strand jacking. The jacks work by grabbing and lifting or lowering cables passing through their hollow centers (Figure 1). 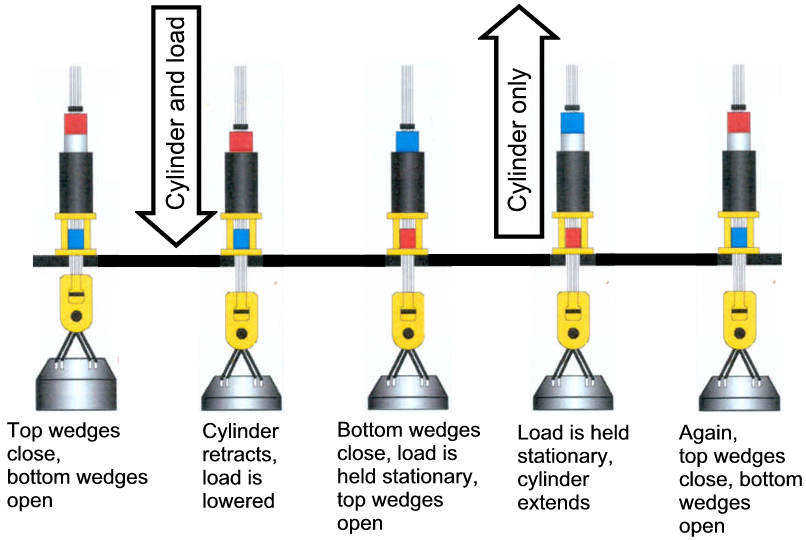 Strand jack sequence of operation for lowering a load. Cable lock devices are shown in red when closed, blue when open. Lowering each section of falsework requires 12 85-ton jacks. But jacking capacity is only part of the story. Uniform lowering at all 12 points is critical. Non-uniform lowering would result in undesirable orientation of the falsework section and shifting of the load weight from some cables to others. The margin for error is relatively small.

In the system provided by Enerpac Integrated Solutions, each jack is electronically controlled and networked to a digital controller. The jacks are intelligent devices with built-in sensors for closed-loop operation with the controller, and movement of the jacks is synchronized to within 0.04 inches between leading and lagging jacks as they lower the falsework structure to the ground. In addition to stroke and load alarms, the controller provides individual stroke and load readouts. Indicative of Myers’ professionalism, the company sent two employees for factory training on the strand jacking system.

Since the lifting system will be exposed to weather for the considerable duration of the project, C.C. Myers’ staff designed and fabricated a dozen steel enclosures fitted with forklift pockets and lifting eyes. Each enclosure houses a strand jack, a 15-horsepower electric hydraulic supply, and a Myers-designed cable coiler. On-site generators provide the required power. Figure 2 shows the enclosures positioned in groups of four.

According to Bill Kidwell of C.C. Myers, the suspended loads at Galena Creek average 110,000 pounds per jack, and falsework sections are lowered at about 60 feet per hour. Figure 3 shows the central controller. 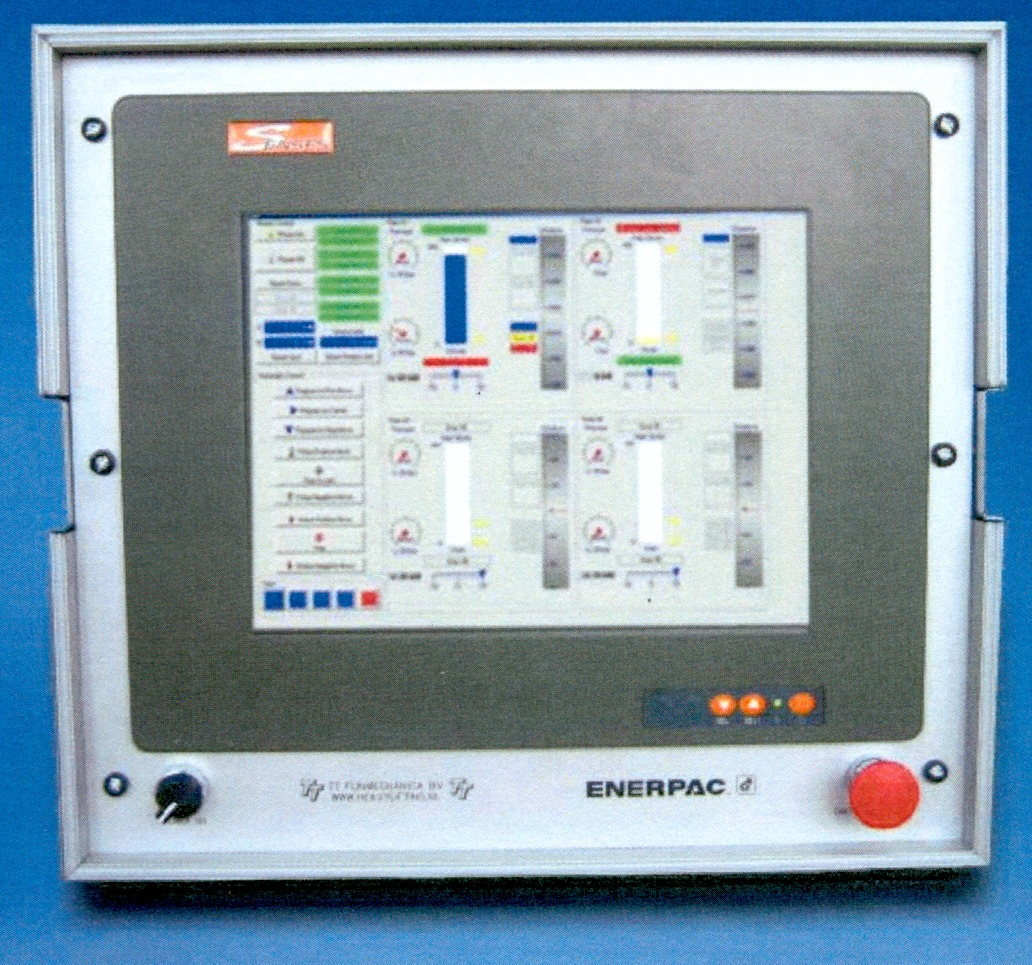 Although the project described employs 12 jacks, the controller architecture is modular, allowing control of up to 32 jacks with one controller. Other system capabilities aimed at larger projects are networks of multiple controllers and data logging. The system’s overall flexibility should enable C.C. Myers to use it on future projects.

Researchers at University of Maine’s Advanced Structures and Composites Center have developed a way to build municipal bridges faster, cheaper and without steel.

Researchers at the UMaine developed a rigid, inflatable arch that can be used to erect and reinforce bridges, temporary shelters and other storage facilities. The researchers say this technology could revolutionize at least one part of the construction industry.

The “bridge-in-a-backpack” technology – so called because of its light weight and the portability of its components – uses collapsible carbon-fiber tubes that are inflated, shaped into arches and infused with resin before being moved into place. The tubes are then filled with concrete, producing arches that are harder than steel yet resistant to corrosion.

Finally, the arches – 23 of them in the case of the Neal Bridge – are overlaid with a fiber-reinforced decking and buried under several feet of dirt and sand. The result, according to engineers, is a normal-looking bridge that goes up faster and costs the same or less than a traditional span but should last longer.

This project is located near the Nevada-California border, at roughly the same latitude as San Francisco. The new roadway, which is intended to relieve high traffic volumes, will include three operating lanes in each direction. The magnitude of the project is indicated by the schedule budget of 650 days for construction of the Galena Creek Bridge. The project is estimated for completion in 2011. 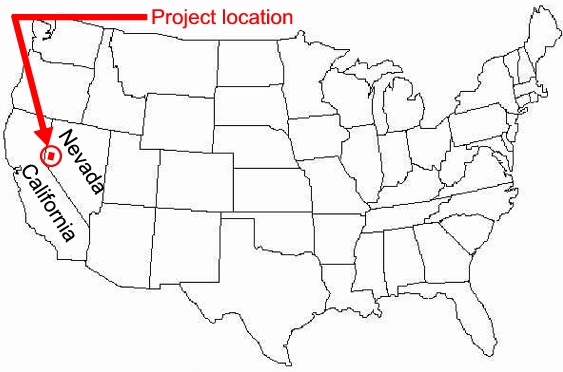