Start Us Up USA!, a nationwide grassroots campaign of the construction equipment industry and their allies, visited Chicago today with a rally of local business and labor leaders and construction workers calling on the federal government to move quickly on the reauthorization of a critical transportation bill.  New transportation funding is necessary to improve our nation’s 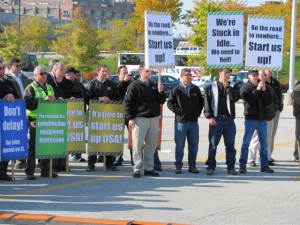 “The construction equipment industry is in a deep depression and we have lost 33,000 jobs in Illinois and 37 percent of our
workforce nationwide the past few years,” said Toby Mack, President and CEO of the Oak Brook, Ill-based Associated Equipment

Distributors. Dennis Slater, President of the Association of Equipment Manufacturers added: “More jobs are at stake in Chicagoland, throughout Illinois and across the country as time is running out for the men and women of the construction and equipment industries without long-term federal transportation investment.”  AEM and AED are co-leading the Start Us Up USA! Campaign.

Illinois is among the ten hardest hit states in the nation according to new research released by IHS Global Insight in September. While the recession abates for some sectors of the U.S. economy, the construction equipment industry remains stalled. Since 2006, the state of Illinois has lost nearly $9.5 billion worth of economic output from the construction industry. The research also found:

Diane Benck, Vice President of General Operations for West Side Tractor Sales Co. in Naperville, Illinois, a mainstay in the Chicagoland community since 1962, attests to the challenges the industry is facing:  “Industry-wide sales have decreased 50 percent since its peak in 2006. This is the first time we’ve seen conditions this poor and it has been difficult to watch the toll this recession has taken on our employees.” Her company is typical of so many others in the industry.

At the rally, Jerry Roper, President and CEO of the Chicagoland Chamber of Commerce and Dennis Gannon, President of the Chicago Federation of Labor, lent their support to the Start Us Up USA! Campaign. Following formal remarks, a caravan of idle construction equipment including a motor grader, rough terrain forklift and hydraulic scissor lift, fired up their engines and took their message to Chicago-area locals and visitors around the museum campus with banners saying “It’s Time To Start Us Up USA!” and “The recession is a

The transportation funding expired on September 30, and critical infrastructure projects like the Eisenhower Expressway Expansion Project need this federal support to proceed in the coming years. According to recent data from The Road Information Program (TRIP), 43 percent of Illinois’ major urban highways are congested and 34 percent of the state’s major roads are in poor or mediocre condition. Travel on Illinois highways has increased by 29 percent since 2007.

In addition, the reauthorization is critical to numerous improvements that are part of the Chicago Region Environmental and Transportation Efficiency (CREATE) program to reduce railroad bottlenecks and congestion, shorten commute times and reclaim Chicago’s position as the intermodal capital of North America. According to CREATE, if infrastructure issues and rail capacity are not addressed, the Chicago region is at risk to lose 17,000 jobs and $2 billion in annual economic production within two decades.

At the Start Us Up USA! Campaign website – www.StartUsUpUSA.com – visitors can find the latest information, share stories on how the construction equipment depression has affected them, post photos and videos, and learn how they can help.

This is the second grassroots event that equipment industry workers and leaders have organized across the country. The campaign moves next to Washington, D.C. on Wednesday, October 28th with a rally on Capitol Hill.

Information on the first Start Us Up US event was posted on September 27 on Site-K Construction Zone, click here.