Demonstrating Diesel-like Efficiency from Natural Gas The application of a fully flexible electro-hydraulic valve train (“camless”engine) designed and developed by Sturman Industries was the key enabler for achieving breakthrough thermal efficiencies while meeting the ultra-low emission requirements set by the California Air Resources Board (ARB). The recently 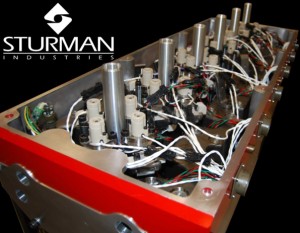 concluded natural gas program with the California Energy Commission (CEC) resulted in peak engine efficiencies over 40% and up to 18%reduction in fuel consumption at part load. The work was performed on one of the industry’s most prominent heavy-duty 15L diesel engine platforms that today serves both the transportation and power generation markets. ”We asked ourselves what do customers really want? They want clean, efficient, and reliable engines. Stoichiometric engines have very low emissions by way of a three-way catalyst, but suffer from lower efficiencies in particular at part load. Lean-burn engines deliver good fuel economy by running unthrottled, but they require very expensive after treatment to meet emission requirements. It was clear we had to combine the best attributes of each approach, so we chose to apply our Hydraulic Valve Actuation system to eliminate the throttling losses,with a simple three way catalyst to clean up remaining emissions. The camless engine combines the benefits of Lean-Burn and Stoichiometric Natural Gas Engines. The results speak for themselves,” says Miguel Raimao, responsible for Business Development at Sturman.

Transforming a Diesel Engine into an Advanced Natural Gas Engine The stock production diesel engine was fitted with a commercial natural gas fuel system and Sturman’s Hydraulic Valve Actuation (HVA) system which provided independent control of valve timing, duration and cylinder de-activation capability. The proprietary Sturman Total Engine Controller (STEC) was used to control the stock turbocharging and EGR systems. These advanced Sturman controls allowed the project team to increase the compression ratio from the typical 10:1 to 14:1. HVA allowed the Sturman team to run the engine un-throttled and at times on only three cylinders to dramatically improve part load efficiency. Stoichiometric combustion was optimized at all operating conditions without the risk of knock, eliminating the need for costly lean NOx after treatment. “The ability to meet low emission requirements at high efficiencies without a cumbersome and costly SCR system will be a game-changer for both the power generation and transportation sectors. In particular, this technology is a solution for California’s interest to utilize biomethane, also known as renewable natural gas. For example, this engine can respond to the varying qualities of renewable natural gas produced at a landfill, and then efficiently generate electricity on the spot,” reports Joe Vollmer, Director of Government Affairs for Sturman Industries.

Hydraulic Valve Actuation – Flexibility for Adapting to Various Applications and Fuels The program with the CEC focused specifically on the application of Sturman’s advanced mobile HVA technology to stationary power generation. For a long time, engine manufacturers have customized engines for each specific application making low volume versions for power 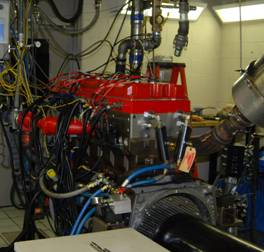 generation considerably more expensive than those for on-highway applications. HVA changes everything. The flexibility afforded by HVA offers the potential to optimize a single engine for a variety of applications through simple software calibration.  For example, where a power generation engine might be equipped with a particular camshaft for constant speed operation, and a mobile engine might have an entirely different camshaft for varying engine speed, HVA does it all with the same hardware. Even engine braking functionality for mobile applications is inherent to every HVA system at no additional cost – it is simply accomplished through software.

Sturman Engine Controls: Addressing a Wide Range of Fuels and Specifications Today’s stoichiometric engines are either detuned to cope with varying natural gas fuel quality or they simply won’t operate on poor quality gas. Whether that poor quality is a result of LNG tank residues or wellhead gas applications, engines often give up 10-20% efficiency potential to avoid knock. However, with flexibility and intelligence the efficiency of every engine during operation can be optimized for its specific duty cycle. “The application of variable valve actuation combined with Sturman’s closed-loop combustion control allowed this 15Lengine to meet its performance requirements even with low quality natural gas,” according to Dan Giordano, Program Lead for the CEC Program. This flexibility allowed cylinder-by-cylinder control of the effective compression ratio to improve the knock margin of the engine. The high geometric compression ratio combined with load control via Late Intake Valve Closing (LIVC) also improved the light load efficiency compared to throttled operation.

Flexibility: The Key Enabler for Natural Gas and Alternative Fuels Sturman was founded in 1989 and remains committed to their vision of a practical, clean, ultra efficient and carbon-free future. “Natural Gas presents an immediate fuel and carbon reduction opportunity for the United States. The key is flexibility. With modern adaptive controls we can make engines clean and affordable. We’ve come such a long way. When I see these systems running, I’m amazed at the performance we see. It’s a significant step toward our ultimate goal of achieving maximum efficiency with alternative fuels.” says Eddie Sturman, Chief Engineer and co-founder of Sturman Industries. Sturman is already working on next steps including installing the state-of-the-art engine in a demonstration vehicle, adding high-pressure direct injection, and installing HVA on larger engines for power generation, gas compression and mobility. 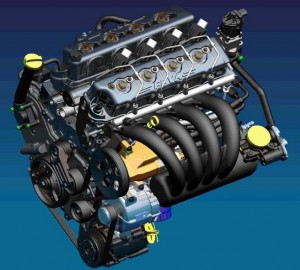 more than 10,000 miles around the United States. “We’ve reached critical mass following a decade of development to optimize the system for robust operation and affordability, including programs for demonstration and test with numerous research institutes, universities and OEM’s around the world. With rising fuel prices and environmental pressures, there is much support for this technology that can meet the rising environmental and efficiency critical demands. Customers, large scale manufacturing partners and the technology are ready,” says Sturman Industries CEO and co-founder Carol Sturman.