By Liz Moucka and R.G. Pickard

Contractors Weir Brothers., A&R Demolition, and Dykon Explosive Demolition collectively held their breath and Cowboy VIPs shed tears Sunday morning as the sound of explosive reports and billowing dust filled the air Sunday morning around Texas Stadium in Irving. Workers had been preparing the structure for implosion since Weir Bros. Inc. won the contract from the City of Irving last October.

The asbestos coating had been removed from the locker rooms, circular suites, and basement, plus the three-story-tall CMU brick wall, which spanned 2,300 linear feet around the circumference of the stadium.

Weir Brothers had brought in most of the estimated 380,000 cubic yards of fill that will be needed to bring the 40-foot-deep stadium bowl to grade. The fill dirt being is coming from excavations on a nearby Texas Department of Transportation (TxDOT) roadway construction project. In a symbiotic relationship, concrete removed from the stadium will be crushed onsite for use on the DART Rail and highway projects adjacent to the stadium property.

From February until April, A&R Demolition weakened the structure for implosion, removing unneeded structural elements, and prepping the dozen roof trusses for demolition. Subcontractor, Panther City Construction Services, LLC, drilled 2,757 holes into concrete columns for Dykon specialists to set their explosive charges for the implosion of the roof and upper seating,

Implosion of the roof and upper seating was contracted to Dykon Explosive Demolition of Tulsa, whose crew used roughly 2,700 lbs. of explosive material to bring down the house. Implosion of the concrete sections began in the basement in the southwest end of the stadium, and was allowed to progress toward the northeast end of the stadium. Dykon breached the roof support trusses with 400 pounds of lineal shaped C4 steel cutting charges – 260 charges in 12 separate locations, detonated in a controlled delay sequence of 1/2 second between charges. The roof was brought down within the footprint of the stadium within 100 seconds of the first explosion in the sequence. After the dust had settled, three of the support buttresses, which were reinforced with post tension cables and extend 100 feet into the ground, remained standing as a testament, overlooking the Trinity River to the north. 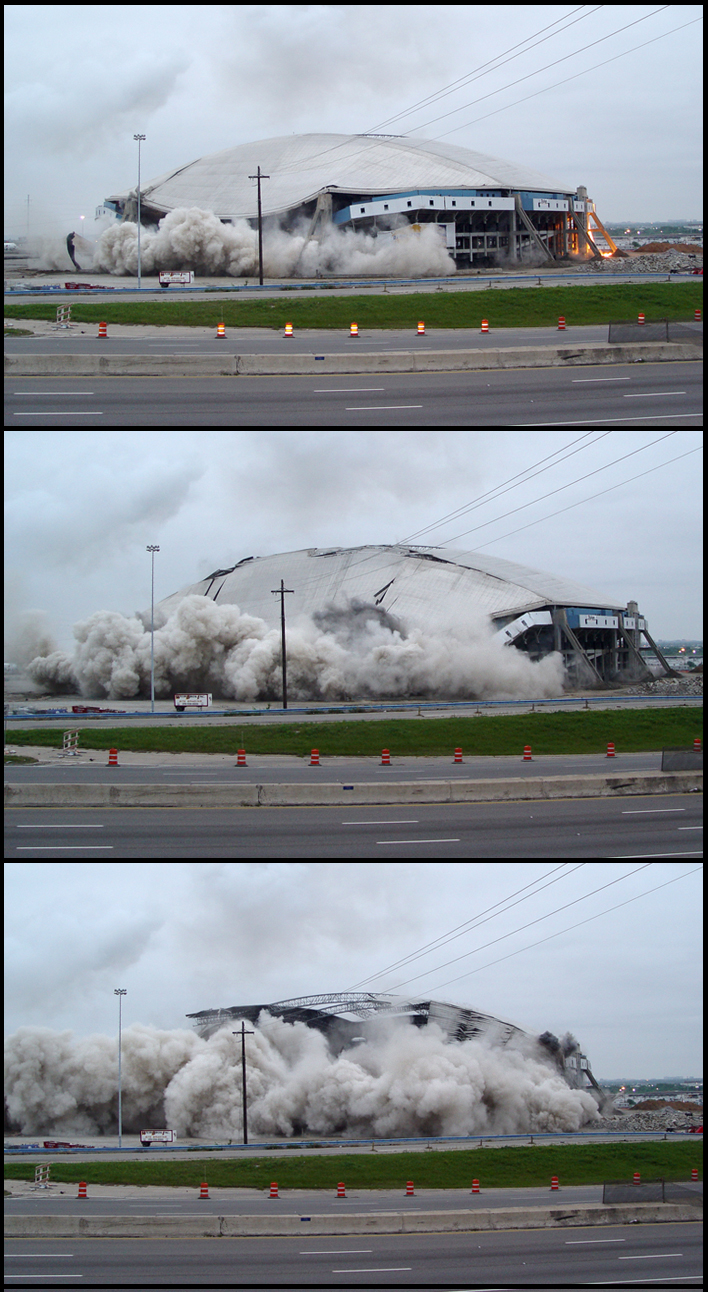 Those three buttresses were brought down the next day. Stephen Reveile of A&R Demolition explained, “The explosives did go off and they leaned over onto the debris that was next to them. When we excavated the debris from the side they were leaning toward, they just laid on down. It took about 30 minutes to get all three of them down. All in all, it was perfect.”

A&R Demolition is recycling the metal from the stadium, sorting it into manageable piles of steel rebar, tin, aluminum and copper. Debris cleanup by A&R Demolition and further elevation to grade of the stadium area by Weir Brothers is expected to be complete by July 22, 2010.

Casey Rogers of Terrell, Texas, winner of an essay contest held by implosion sponsor, Kraft Foods, pushed the detonation button, which actually triggered the explosion electronically rather than with cables. The 11-year-old wrote about Casey’s Heart, a charity he started to help the homeless in North Texas.