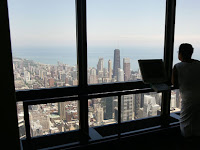 When I lived in Chicago, I would regularly visit the Sears Tower. It was then the tallest building in the world, a true tribute to design, engineering and construction. But to me it was more than that…

On my regular visits I would walk the observation floor and look out over the miles of Chicago that sprawled below, stretching to the horizon on every side but one that silently slipped into Lake Michigan. It was always at twilight when I made these visits because I could watch the city morph from its outbound tentacles of tangled traffic into a dazzling jewel that painted the night sky with its reflected man-made aurora borealis of lights.

It was always breathtaking. 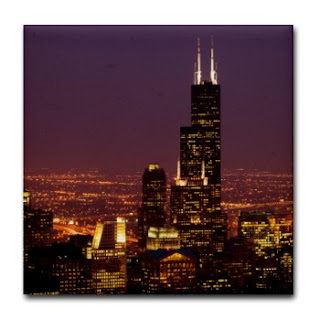 It always made me appreciate human achievement. To see this panoramic spectacle and realize that every inch of concrete and asphalt was placed by a contractor; that every strand of wire, every length of pipe or conduit was installed by a construction worker; every brick laid by a mason; all the windows, sidewalks, roofs; all the endless miles of ductwork; the millions of square feet of flooring were all placed by people.

As I would look at this I would marvel at people’s abilities to tie all this together with such harmony that it worked with nearly flawless perfection. And I would think of all the people that were fed and clothed because of the paychecks all this generated; all the children that were educated; the vacations that were enjoyed; the churches that were built, all because of the people who put this tapestry of life together.

Make no mistake; our infrastructure has taken us from 13 colonies to the most advanced civilization in history. Without it we’d still be a small struggling third world country.

While we embark on the tasks of rebuilding and improving this infrastructure with the American Recovery and Reinvestment Act, let us celebrate some of it.

The International Right of Way Association (IRWA) is celebrating its 75th Anniversary by recognizing the Top 10 List of North American Infrastructure Projects of the past 75 years, and the people who made them a reality.

Last year, as IRWA geared up for its 75th anniversary, they realized that there was no better time to show the true impact of these behind-the-scenes infrastructure professionals. So they rallied their members — professionals from the public and private sectors that plan, research, design, implement and manage these vital projects — and asked them to nominate those projects that have had the greatest impact on America’s quality of life.

IRWA’s announcement comes as President Obama’s American Recovery and Reinvestment Act is signed into law. This economic stimulus plan, which focuses heavily on the country’s infrastructure, is designed to create millions of jobs, many of which will come from funding the repairing of roads, bridges, schools and other longer-term infrastructure projects. So who are these people who make infrastructure projects come to life?

The highways we drive on, utilities in our homes, telephone towers that enable us to communicate — all exist because a construction professional applied their unique expertise in creating the nation’s infrastructure.

“The right of way profession is always a bit challenging to explain,” notes IRWA international president, Faith A. Roland, SR/WA. “We encompass so many different disciplines, it’s hard to articulate the diverse range of professionals it takes to construct a bridge or build a new highway. We are a very multi-disciplined group of specialists, and nearly every group is required at one phase or another when a major infrastructure project is undertaken.”

IRWA executive vice president, Mark Rieck says, “Developing real property for the nation’s transportation, water and energy projects is probably the most user-friendly way to describe the role of our right of way professionals. Selecting sites, preparing feasibility studies, dealing with zoning, platting, utilities, environmental reports, government approvals, deed restrictions, utility easements, project management… and the list goes on and on. Our nation’s infrastructure projects employ thousands of professionals, and in many cases, they span over years and even decades.”

In 2008, members nominated more than 130 projects. Following an organization-wide vote, the Top 10 resulted in this unique mix of “quality of life” projects:

“While some of these projects are known around the world, the majority are less visible and far from glamorous,” commented IRWA past president, Jim Struble, SR/WA.” So, it’s important to realize that those who voted actually understand and appreciate these projects on two levels; one, the massive undertaking that was required and two, the massive impact each has had on improving our everyday lives.”

Over the next ten days we’ll take short side trips and explore the infrastructure projects IRWA members voted on as the top ten. You may not agree with the projects listed or you may think others are more deserving of recognition. If you do, let me know and we may do our own rendition of top infrastructure projects. As you may have guessed, the Sears Tower is one of mine… but then again every city is too.

IRWA was founded in 1934, when the U.S. economy was in the midst of the Great Depression. Infrastructure projects were created through President Roosevelt’s New Deal, leading to a need for an organized association of right of way professionals. Much like the public works projects of the Great Depression, President Obama hopes to boost the U.S. economy and improve the country’s infrastructure.