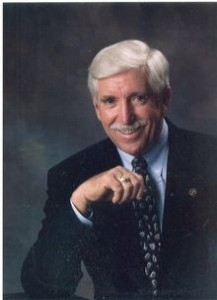 It is with great sadness that I inform you that TRIP Chairman Emeritus and industry leader Richard Ashmore passed away on June 14, 2011.

A valued member of the TRIP Board, Richard served as a director for more than 15 years and as TRIP Chairman in 2005.  He will be missed not only for his contributions to the industry, but for his fellowship and dedication to his family and friends.  Our thoughts and prayers are with Mary Jane and Richard’s family at this time.

Mr. Ashmore graduated from Clemson University, Class of 1958, with a degree in Civil Engineering, and entered the family owned construction business in May 1959. In 1967, he became president of Ashmore Brothers, Inc. and held various positions in construction associations. He served as president of Carolinas Associated General Contractors and served several terms on the National A.G.C. Executive Board and Board of Directors. He was recipient of Greenville Home Builders Associate Member of the Year Award in 1983 and of the Greenville Home Builders Distinguished Service Award in 1992.

He was a member of Taylors First Baptist Church where he taught Sunday School, served as Chairman of the Board of Deacons, and sang tenor in the choir.

In 1989, he was elected to Greenville County Council where he served until 1997. He was recipient of the Volunteer of the Year Award by Greenville YMCA for Chair of the Eastside Capital Campaign, and the President’s Coin of AGC of America in 2000. He served as Chairman of the Appalachian Council of Governments and Chairman of Donaldson Development Center. In 2002, he was inducted into the South Carolina Home Builders Hall of Fame and in 2004 was elected to the office of National Treasurer for AGC of America. He was also 2011 Director Emeritus of SCTAC (formerly Donaldson Commission).

Surviving, in addition to his wife of fifty-three years, are his daughter and son-in-law, Leigh Ashmore Stephenson and Les Stephenson of Tallahassee, FL; two sons and daughters-in-law, Richard A. “Rick” , Jr. and Linda of Greer, and David and Bonnie Ashmore of Greenville; a sister and brother-in-law, Becky and Mike King of Greer; a brother, Russell C., Jr. and Ruth Ashmore of Taylors; three granddaughters, Marae, Molly Grace and Lucy Ashmore; and two step-grandchildren, Weslie and Trail Stephenson.

Richard will be missed by his family and his many friends.