The TRIP report, “Keeping Maryland Mobile: Progress and Challenges in Providing an Efficient, Safe and Well-Maintained Transportation System,” finds that throughout Maryland, state-maintained road conditions have improved since 2012 and the number of structurally deficient state-maintained bridges has decreased during that time. While traffic congestion continues to increase, the state has made progress in completing needed projects to improve the efficiency of its transportation system.

Maryland has completed a number of congestion relief projects since 2013, including construction of the final section of the Intercounty Connector (ICC), construction of two toll-lanes on eight miles of I-95 from I-895 to MD 43, widening I-70 to six lanes at South Street/Monocacy Boulevard, widening several sections of US 40, and widening and reconstruction of I-695/Wilkens Avenue. Additional mobility improvements completed in Maryland since 2013 include expanded service patrols on major highways, enhanced driver information, improved traffic signal timing, and construction of 11 miles of new sidewalks and 13 miles of marked bicycle lanes.

Despite efforts to improve the efficiency of Maryland’s transportation system, congestion on Maryland’s roads results in 195 million hours of delays annually and the consumption of 85 million additional gallons of fuel, resulting in an annual cost of $4.1 billion in lost time and wasted fuel. Two of the nation’s 25 most congested urban areas are located in or include parts of Maryland. The Washington, DC metro area, which includes suburbs in Maryland and Virginia, is ranked first nationally in the cost of traffic congestion per commuter, with congestion costing $1,834 per commuter and causing 82 hours of delay annually. The Baltimore urban area ranked 25th in the cost of traffic congestion per commuter at $1,115, with the average Baltimore motorist losing 47 hours annually.

“Despite overwhelming support for choices in meeting our transportation needs, some groups would deny us this choice by aggressively opposing even the most reasonable roadway projects as part of a multi-modal transportation system,” said Tom Calcagni, director of public and government affairs for AAA Mid-Atlantic. “That is why the success stories we have heard today, as well the successes of the Wilson Bridge, Mixing Bowl, ICC and other impactful projects, are so important.  They show that investments in roadways and bridges can and do make a difference.”

The efficiency and condition of Maryland’s transportation system, particularly its highways, is critical to the health of the state’s economy. Annually, $445 billion in goods are shipped to and from sites in Maryland with 75 percent of the freight tonnage being shipped by trucks.

“While Maryland has been able to use increased state transportation funds to improve road and bridge conditions in recent years, congestion continues to mount and a significant amount of additional local, state and federal funding is still needed,” said Will Wilkins, TRIP’s executive director. “Without additional transportation funding, Maryland’s transportation system will become increasingly deteriorated and congested, the state will miss out on opportunities for economic growth, and quality of life will suffer.”

Progress and Challenges in Providing an Efficient, Safe and

Eight years after the nation suffered a significant economic downturn, Maryland’s economy continues to rebound. The rate of economic growth in Maryland, which will be greatly impacted by the reliability and condition of the state’s transportation system, continues to have a significant impact on quality of life in the Free State.

Maryland has undertaken a sustained commitment to upgrade the condition and efficiency of its roads, highways, bridges, transit systems and pedestrian and bicycling facilities. The Maryland General Assembly’s approval of the Transportation Infrastructure Investment Act of 2013 has allowed the state to significantly boost its investment in Maryland’s transportation system.

In December 2015 the president signed into law a long-term federal surface transportation program that includes modest funding increases and allows state and local governments to plan and finance projects with greater certainty through 2020.

Population and economic growth have placed increased demands on Maryland’s major roads and highways, leading to mounting wear and tear on the transportation system.

Traffic congestion places a significant burden on Marylanders, including lost time, reduced economic productivity and wasted fuel. Maryland’s roadways are among the most congested in the nation. 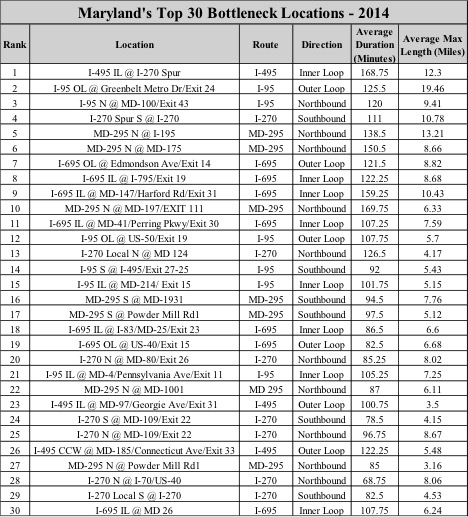 Since the Maryland General Assembly’s passage of the Transportation Infrastructure Investment Act of 2013 the state has been able to increase investment in repairing roads, highways and bridges and move forward with numerous transportation projects to improve mobility in Maryland.

Nearly a quarter – 23 percent — of locally and state-maintained bridges in Maryland show significant deterioration or do not meet current design standards, often because of narrow lanes, inadequate clearances or poor alignment with the adjoining roadway.

The efficiency of Maryland’s transportation system, particularly its highways, is critical to the state’s economy. Businesses are increasingly reliant on an efficient and reliable transportation system to move products and services. A key component in business efficiency and success is the level and ease of access to customers, markets, materials and workers.

The recently approved five-year federal surface transportation program includes modest funding increases and provides states with greater funding certainty, but falls far short of providing the level of funding needed to meet the nation’s highway and transit needs. The bill does not include a long-term and sustainable revenue source.