Deficient, Congested Roadways Cost New York State Drivers $24.9 Billion Annually, As Much As $2,798 Per Driver. Costs Will Rise And Transportation Woes Will Worsen Without Increased Funding

Roads and bridges that are deficient, congested or lack desirable safety features cost New York State motorists a total of $24.9 billion statewide annually – as much as $2,798 per driver in some areas – due to higher vehicle operating costs, traffic crashes and congestion-related delays. Increased investment in transportation improvements at the local, state and federal levels could relieve traffic congestion, improve road, bridge and transit conditions, boost safety, and support long-term economic growth in New York, according to a new report released today by TRIP, a Washington, DC based national transportation organization.

The TRIP report, “New York’s Top Transportation Issues: Meeting the State’s Need for Safe, Smooth and Efficient Mobility,” finds that throughout New York, 38 percent of major locally and state-maintained urban roads are in poor condition. Nearly two-fifths of New York’s bridges are structurally deficient or functionally obsolete. The state’s major urban roads are becoming increasingly congested, with drivers wasting significant amounts of time and fuel each year. And, nearly 5,800 people were killed in crashes on New York’s roads from 2010 to 2014.

Driving on deficient roads costs some urban area drivers as much as $2,798 per year in the form of extra vehicle operating costs (VOC) as a result of driving on roads in need of repair, lost time and fuel due to congestion-related delays, and the costs of traffic crashes in which roadway features likely were a contributing factor. The TRIP report calculated the cost to motorists of insufficient roads in the Albany, Binghamton, Buffalo, New York City, Poughkeepsie-Newburgh, 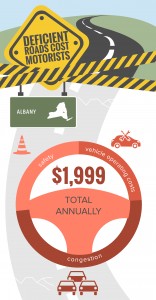 Rochester, Syracuse and Utica urban areas. A breakdown of the costs per motorist in each area along with a statewide total is below.

The TRIP report finds that 38 percent of major urban roads in the state are in poor, while 42 percent are in mediocre or fair condition, and the remaining 21 percent are in good condition. Driving on deteriorated roads costs New York State motorists a total of $6.3 billion each year in extra vehicle operating costs, including accelerated vehicle depreciation, additional repair costs, and increased fuel consumption and tire wear.

Traffic congestion in the state is worsening, costing the state’s driver a total of $12.4 billion annually in lost time and wasted fuel.

A total of 39 percent of New York’s bridges show significant deterioration or do not meet modern design standards. Twelve percent of New York’s bridges are structurally deficient, with significant deterioration to the bridge deck, supports or other major components. An additional 27 percent of the state’s bridges are functionally obsolete, which means they no longer meet modern design standards, often because of narrow lanes, inadequate clearances or poor alignment.

“Today’s TRIP report highlights the poor conditions that New Yorkers across the state face on our roads and bridges every day,” said John Corlett, Legislative Committee chairman at AAA New York State.  “In 2015 alone, AAA serviced more than 200,000 flat tire calls throughout New York – many of which were due to potholes and other hazardous road conditions.  This is a symptom of the lack of adequate investment in roads. I look forward to working with the Governor and State Legislature to fully fund the needs of our road and bridge system, which will enhance safety and help improve the quality of life for the millions of drivers who travel on our roads and bridges every day.”

Traffic crashes in New York claimed the lives of 5,775 people between 2010 and 2014. New York’s overall traffic fatality rate of 0.92 fatalities per 100 million vehicle miles of travel is lower than the national average of 1.09.

“These conditions are only going to get worse if greater funding is not made available at the local, state and federal levels,” said Will Wilkins, TRIP’s executive 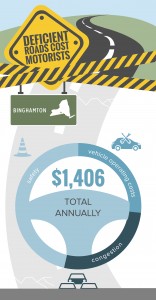 director. “Without additional transportation funding New York’s transportation system will become increasingly deteriorated and congested, the state will miss out on opportunities for economic growth and quality of life will suffer.”

Meeting the State’s Need for Safe, Smooth and Efficient Mobility

Eight years after the nation suffered a significant economic downturn, New York’s economy continues to rebound. The rate of economic growth in New York, which will be greatly impacted by the reliability and condition of the state’s transportation system, continues to have a significant impact on quality of life in the Empire State.

An efficient, safe and well-maintained transportation system provides economic and social benefits by affording individuals access to employment, housing, healthcare, education, goods and services, recreation, entertainment, family, and social activities. It also provides businesses with access to suppliers, markets and employees, all critical to a business’ level of productivity and ability to expand. Conversely, reduced accessibility and mobility – as a result of traffic congestion, a lack of adequate capacity, or deteriorated roads, highways, bridges and transit facilities – diminishes a region’s quality of life by reducing economic productivity and limiting opportunities for economic, health or social transactions and activities.

With a wide based economy including finance, manufacturing, technology, communications, printing, entertainment, shipping, publishing, agriculture and tourism, the quality of New York’s transportation system will play a vital role in the state’s level of economic growth and quality of life.

In this report, TRIP looks at the top transportation issues faced in New York as the state addresses its need to modernize and maintain its roads, highways, bridges and transit systems.

In December 2015, Congress passed and the president signed into law a long-term federal surface transportation program that includes modest funding increases and allows state and local governments to plan and finance projects with greater certainty through 2020. The Fixing America’s Surface Transportation Act (FAST Act) provides approximately $305 billion for surface transportation with highway and transit funding slated to increase by approximately 15 and 18 percent, respectively, over the five-year duration of the program. While the modest funding increase and certainty provided by the FAST Act are a step in the right direction, , the funding falls far short of the level of needed to improve conditions and meet the nation’s mobility needs and fails to deliver a sustainable, long- 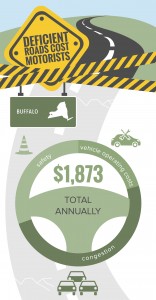 term source of revenue for the federal Highway Trust Fund.

Population and economic growth in New York have resulted in increased demands on the state’s major roads and highways, leading to increased wear and tear on the transportation system. 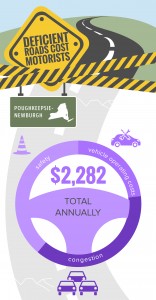 pavement surfaces in poor condition, providing a rough ride and costing motorist in the form of additional vehicle operating costs.

Nearly two-fifths of locally and state-maintained bridges in New York show significant deterioration or do not meet current design standards often because of narrow lanes, inadequate clearances or poor alignment. This includes all bridges that are 20 feet or more in length.

New York’s rural traffic fatality rate is approximately three-and-a-half times the fatality rate on all other roads in the state. Improving safety features on New York’s roads and highways would likely result in a decrease in the state’s traffic fatalities and serious crashes. It is estimated that roadway features are likely a contributing factor in approximately one-third of all fatal and serious traffic crashes.

Increasing levels of traffic congestion cause significant delays in New York, particularly in its larger urban areas, choking commuting and commerce. Traffic congestion robs commuters of time and money and imposes increased costs on businesses, shippers and manufacturers, which are often passed along to the consumer.

Investment in New York’s roads, highways and bridges is funded by local, state and federal governments.  The recently approved five-year federal surface transportation program includes modest funding increases and provides states with greater funding certainty, but falls far short of providing the level of funding needed to meet the nation’s highway and transit needs. The bill does not include a long-term and sustainable revenue source.

The efficiency of New York’s transportation system, particularly its highways, is critical to the health of the state’s economy. Businesses rely on an efficient and dependable transportation system to move products and services. A key component in business efficiency and success is the level and ease of access to customers, markets, materials and workers.