As the Baby Boom Generation begins to turn 65, the number of older Americans and their share of the overall population will swell dramatically. But, according to a new report, although these older Americans will be more mobile and active than any previous generation, they will face a transportation system that is inadequate to offer the mobility and safety demanded by older Americans and the population in general. The report, “Keeping Baby Boomers Mobile: Preserving Mobility and Safety for Older Americans,” was released today by TRIP, a national non-profit transportation research group based in Washington, D.C.

Despite their efforts to modify their own driving, and the fact that overall fatalities have declined in recent years, older motorists are still involved in a disproportionately high share of traffic fatalities. In 2010, there were 5,750 fatalities in crashes involving at least one driver 65 or older. And although drivers 65 and older account for eight percent of all miles driven, they comprise 17 percent of all traffic fatalities. Data for each state can be found in the report’s appendix. 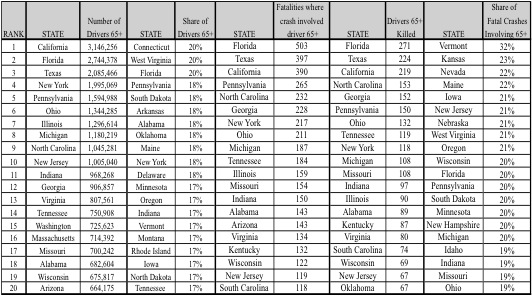 According to the TRIP report, the population of Americans 65 and older will grow by 60 percent by 2025, at which time one in every five drivers will be over the age of 65. Because of good nutrition, improved health care, better education and higher incomes, new generations of older Americans will be more mobile, healthy and active for a longer portion of their lives than those just a few decades ago. For those 65 and older, 90 percent of travel takes place in a private vehicle.

“The growing ranks of older Americans will far outpace previous generations with their level of mobility and activity. Serving their needs will require a transportation system that includes safer roads, safer vehicles, safer drivers and improved choices,” said Will Wilkins, executive director of TRIP. “Congress can help not only older drivers, but all drivers by passing long-term federal surface transportation legislation now.”

Preserving the Mobility and Safety of Older Americans

With the first wave of the Baby Boom Generation turning 65 in 2011, the number of older Americans and their share of the population will begin to grow significantly in the coming years. And as this generation continues to age and grow, it will demand a level of mobility and an active lifestyle that far outpaces any of America’s previous generations. This aging population will both create and face significant transportation challenges, including a transportation system that lacks many features that would accommodate the level of mobility and safety older Americans desire and expect. Transportation innovations to accommodate the Baby Boom Generation’s need for improved safety and mobility will benefit users of all ages.

For older Americans, as well as the population in general, the ability to travel represents freedom, activity and choice. Older Americans prize their mobility and active lifestyles and want to maintain them as long as possible. For many older people, driving remains the safest, easiest and most convenient means of transportation.

Although overall traffic fatality rates have fallen to record lows in recent years, older drivers still make up a disproportionately high share of those involved in fatal traffic crashes. Roadway safety improvements designed to make it easier for older drivers to navigate traffic are becoming increasingly important, as the largest generation in American history grapples with the effects of aging while trying to maintain a level of mobility that matches its active lifestyle.

As the Baby Boom Generation ages, older Americans form a greater portion of the overall population and a greater share of all licensed drivers. 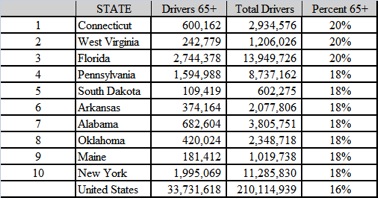 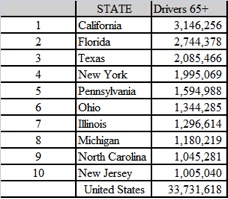 Older Americans are more mobile and active than ever and want to maintain that lifestyle for as long as possible. Private vehicles remain the overwhelming transportation mode of choice for older Americans.

While the overwhelming majority of trips by older people take place in private vehicles, public transit options can be improved to allow for wider usage by older Americans.

ASSESSMENTS AND GUIDELINES FOR OLDER DRIVERS

Although many older motorists tend to self-regulate and monitor their own driving and abilities, many states require more stringent testing and license renewal policies for older drivers. A variety of organizations offer classes and independent evaluations for older drivers to sharpen their skills and determine the range of their driving abilities.

Certain situations and driving environments can be especially challenging or hazardous for older motorists.

In 2010, there were 5,750 fatalities in crashes involving at least one driver age 65 or over. Although overall fatality rates have decreased in recent years, the number of older drivers killed or involved in fatal crashes remains disproportionately high. 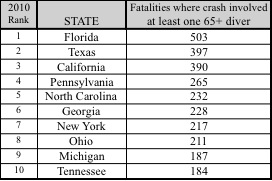 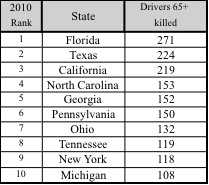 State transportation departments are becoming increasingly active in addressing the need to maintain the mobility of older Americans through a combination of improvements to driving and pedestrian facilities, enhanced public education, and an emphasis on partnering with other organizations on a broader approach to maintaining and improving the mobility of older people.

All data used in this report is the most current available.  Sources of information for this report include:  The Federal Highway Administration (FHWA), the National Highway Traffic Safety Administration (NHTSA), the National Household Travel Survey, The Brookings Institution, Monash University, The U.S. Department of Health and Human Services, AARP Public Policy Institute; the Insurance Institute for Highway Safety and the U.S. Census Bureau.