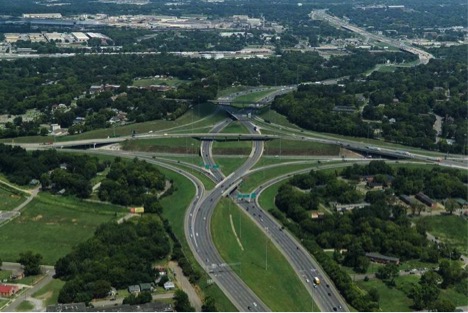 ALABAMA DRIVERS LOSE $5.3 BILLION ANNUALLY – AS MUCH AS $1,846 PER DRIVER – ON ROADS THAT ARE ROUGH, CONGESTED & LACK SOME SAFETY FEATURES. LACK OF FUNDING WILL LEAD TO FURTHER ROAD AND BRIDGE DETERIORATION, INCREASED CONGESTION & HIGHER COSTS TO MOTORISTS 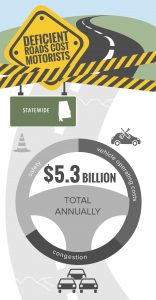 Roads and bridges that are deteriorated, congested or lack some desirable safety features cost Alabama motorists a total of $5.3 billion per year – as much as $1,846 per driver in some areas – due to higher vehicle operating costs, traffic crashes and congestion-related delays. Adequate investment in transportation improvements at the local, state and federal levels is needed to relieve traffic congestion, improve road, bridge, and transit conditions, boost safety, and support long-term economic growth in Alabama, according to a new report released today by TRIP, a Washington, DC-based national nonprofit transportation research organization.

The TRIP report, “Alabama Transportation by the Numbers: Meeting the State’s Need for Safe, Smooth and Efficient Mobility” finds that nearly one-third of Alabama’s major locally and state-maintained roads are in poor or mediocre condition and seven percent of locally and state-maintained bridges (20 feet or longer) are structurally deficient. The report also finds that the state’s major urban roads are becoming increasingly congested, causing significant delays and choking commuting and commerce. In addition to the statewide report, TRIP has also prepared regional reports for the  Anniston-Oxford-Gadsden, Birmingham, Florence, Decatur-Huntsville, Mobile,  Montgomery and Tuscaloosa urban areas.

Driving on deficient roads costs Alabama drivers $5.3 billion annually in extra vehicle operating costs (VOC) as a result of driving on roads in need of repair, lost time and fuel due to congestion-related delays, and the costs of traffic crashes in which roadway features likely were a contributing factor. The chart below details the statewide costs as well as the cost to the average driver in each of the state’s largest urban areas.

The TRIP report finds that 14 percent of major locally and state-maintained roads in Alabama are in poor condition and another 16 percent are rated in mediocre condition, costing the state’s drivers an additional $2 billion each year in extra vehicle operating costs. These costs include accelerated vehicle depreciation, additional repair costs, and increased fuel consumption and tire wear.

“Infrastructure impacts both the local economy and quality of life for those who live in Montgomery,” said Montgomery Mayor Todd Strange. “From tech to healthcare to public safety and tourism – everyone benefits from a sound infrastructure, and we will continue to support these improvements in our area.”

From 2015 to 2017, 4,507 people were killed in traffic crashes in Alabama. The financial impact of traffic crashes costs Alabama motorists a total of $1.8 billion statewide.  Alabama’s overall traffic fatality rate of 1.34 fatalities per 100 million vehicle miles of travel is higher than the national average of 1.16. The fatality rate on Alabama’s non-interstate rural roads is more than two and a half times higher than on all other roads in the state (2.38 fatalities per 100 million vehicle miles of travel vs. 0.87).

The buying power of the state’s 18 cents-per-gallon fuel tax, last raised in 1992, has been more than cut in half by inflation and increased fuel economy. The vast majority of Alabama’s current transportation budget is devoted to preserving the existing system, leaving only $150 million available annually for new projects.

Driving on Alabama roads that are deteriorated, congested and that lack some desirable safety features costs Alabama drivers a total of $5.3 billion each year. TRIP has calculated the cost to the average motorist in the state’s largest urban areas in the form of additional vehicle operating costs (VOC) as a result of driving on rough roads, the cost of lost time and wasted fuel due to congestion, and the financial cost of traffic crashes. The chart below details the cost of deficient roads statewide and for the average driver in the state’s largest urban areas.

Due to inadequate state and local funding, 30 percent of major roads and highways in Alabama are in poor or mediocre condition. Driving on rough roads costs the average Alabama driver $507 annually in additional vehicle operating costs – a total of $2 billion statewide.

Seven percent of Alabama’s bridges are structurally deficient, meaning there is significant deterioration of the bridge deck, supports or other major components. Most bridges are designed to last 50 years before major overhaul or replacement, although many newer bridges are being designed to last 75 years or longer. In Alabama, 49 percent of the state’s bridges were built in 1969 or earlier. The chart below details bridge conditions statewide and in the state’s largest urban areas. 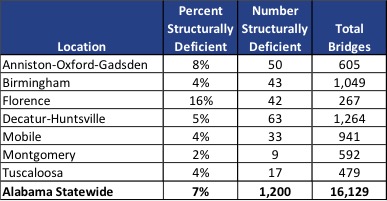 The state’s roads are seeing unprecedented levels of traffic, with the number of vehicle miles of travel per lane mile in Alabama increasing 40 percent from 1990 to 2015.  Congested roads choke commuting and commerce and cost Alabama drivers $1.5 billion each year in the form of lost time and wasted fuel. In the most congested urban areas, drivers lose up to $990 and nearly one full work week per year sitting in congestion. 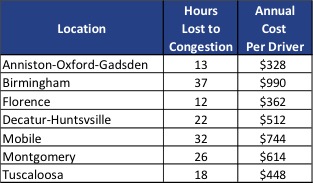 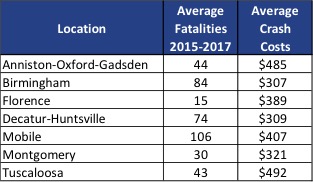 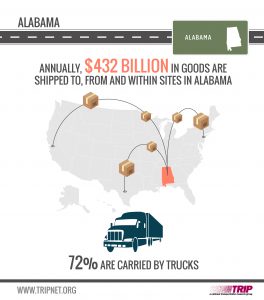 The health and future growth of Alabama’s economy is riding on its transportation system. Each year, $432 billion in goods are shipped to, from and within sites in Alabama, mostly by truck. Increases in passenger and freight movement will place further burdens on the state’s already deteriorated and congested network of roads and bridges.

The design, construction, and maintenance of transportation infrastructure in Alabama support 65,068 full-time jobs across all sectors of the state economy. These workers earn $2.1 billion annually. Approximately 940,000 full-time jobs in Alabama in key industries like tourism, retail sales, agriculture, and manufacturing are completely dependent on the state’s transportation network.

The buying power of the state’s 18 cents-per-gallon fuel tax, last raised in 1992, has been more than cut in half by inflation and increased fuel economy. The vast majority of Alabama’s current transportation budget is devoted to preserving the existing system, leaving only $150 million available each year for new projects that would address congestion or expand the system to accommodate population and travel growth, and promote economic development. A 2019 report by the University of Alabama’s Alabama Transportation Institute and Alabama Transportation Policy Research Center found that, through 2040, Alabama should be spending a minimum of $600 million annually on additional roadway capacity to allow the state to be economically competitive. An annual investment of $800 million in additional roadway capacity would optimize Alabama’s economic opportunities.

ATRIP (the Alabama Transportation Rehabilitation and Improvement Program)provided Alabama with more than $1.3 billion in borrowed dollars, beginning in 2013, to address needed improvements that would not have been possible with the available revenue. The use of approximately $200 million annually in ATRIP funds, which concluded in 2017, as well as additional debt incurred to finance the reconstruction of the elevated interstate and bridges in Birmingham’s Central Business District, has resulted in the state’s annual highway debt service increasing to $114 million in 2018, a level it will stay at for the next 19 years.  This annual level of state highway debt service is up from $13.6 million in 2011.

As Alabama works to enhance its thriving, growing and dynamic state, it will be critical that it is able to address the most significant transportation issues by providing a 21stcentury network of roads, highways, bridges, and transit that can accommodate the mobility demands of modern society.

Alabama will need to modernize its surface transportation system by improving the physical condition of its transportation network and enhancing the system’s ability to provide efficient, safe and reliable mobility for residents, visitors and businesses. Making needed improvements to the state’s roads, highways, bridges, and transit systems would provide a significant boost to the economy by creating jobs in the short term and stimulating long-term economic growth as a result of enhanced mobility and access.